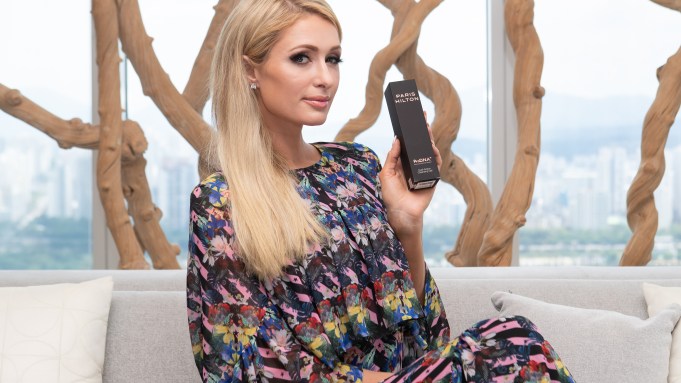 SEOUL — “I’ve tried everything,” said Paris Hilton drawing out that last word emphatically, “so I know.”

It was the South Korean launch of her skin-care brand, ProD.N.A, and the blonde heiress was touting her line’s benefits.

“Nothing has ever worked as well as it does on me, or everyone I’ve sent it to is raving about how their skin has never looked so beautiful,” she said. “So I’m really proud to be part of something that really is changing people’s lives and their skin, making them feel more confident and youthful.

Launched in 2015, the brand’s hero ingredient is what it calls “GenoMatrix,” described as comprised of microalgae enzymes. Although already available in 12 countries through a mix of online and wholesale partners, Hilton was keen to drum up awareness in Seoul.

“It’s a unique market because of their love for skin care. I’ve even seen these routines where there are like 18 steps…more than any other market in the world. They just love skin care,” she said.

“Already I know that it’s going to be a huge success because everybody is already loving it so much,” she added.

“She actually brought in a pile of skin-care products that she said that helped her maintain her youth,” Hilton Lifestyles chief executive officer Adam Xavier confirmed. “Some of my chemists who’ve been in the industry for like 20 years went into the ingredients and identified which ones may have helped her. And from that we put together a couple of starter formulations: an eye cream, face cream and a cleanser. Your basics of a regimen. And we spent the better part of the year fine-tuning those.”

While Hilton’s team believes South Korea has strong potential as a market in itself, the idea was to hit two birds in one stone.

“We know that K-beauty has more of a…[global] clout…so we’re gonna flip it,” Xavier said, declining to share financial specifics about the label. “Because most of the American market is going more towards K-beauty, [by being here] it’s going to help in our American and global efforts.

Ju also shared that the line had been adapted for local tastes. “In the Korean version, we’re adding a couple features not in the American version to appeal to the Korean market: skin whitening and anti-wrinkling,” he said.

Paris Hilton In Talks to Make Her First Outside Beauty Investment