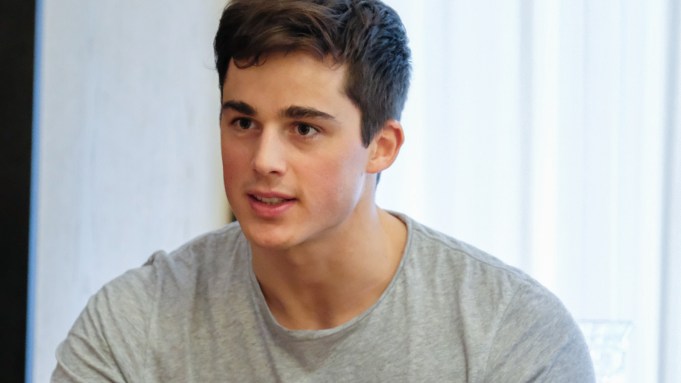 Lab Series named mechanical engineering Ph.D.-turned-model and social media star as its new brand ambassador and global face of its Maxellence collection. The line, which bowed early this month, includes a Dual Concentrate serum, $225, and The Singular Cream, $160.

Prior to his Internet celebrity, Boselli was teaching math to mechanical engineering students for five years while working on his Ph.D., which he obtained a year ago. And it’s this, combined with model looks, that makes him one of the most well-rounded influencers to hit social media, according to Octavio Valdes, ‎global general manager, Men’s Skincare Group, at The Estée Lauder Cos. Inc. The company contacted Boselli over a year ago, when he had less than half the Instagram following he has now, and started shooting the first campaign for Maxellence in February of last year.

And while the Italian-born Boselli’s Instagram feed might be laden with shirtless photos of his chiseled physique and an affinity for electric blue Speedos — he’s so much more than a six-pack, Boselli insisted during an interview at The Edition hotel here Thursday. He’s an academic whose mission is to make science more mainstream, he said, starting with a video series, “Exercise Anatomy,” which recently launched on his YouTube channel.

“All of my students would post on these fan pages and one post went viral. It was the top trending [post] on Facebook for two days. Bear in mind, I wasn’t even on Facebook [at the time]. A few months before, my friends forced me to do an Instagram page and it was easy enough to maintain. It’s good that it was in place at that time,” said the 28-year-old, who was in town to host an event for Lab Series Thursday night at Bloomingdale’s on 59th Street. Upon its launch, the brand took over the department store’s B-Studio with “high touch,” digital elements and imagery featuring Boselli. The range launched exclusively with Bloomingdale’s and is carried in all 38 of the retailer’s doors.

One of the smaller brands in the Estée Lauder stable — with sales said to be less than $100 million — Lab Series spent the past year working with influencers in varying capacities as a mean’s to attract a younger audience and tap into a male consumer more apt to spend on prestige skin care than ever.

“We know that Millennial men are very different than Baby Boomers, and we have information that shows the younger generation is a lot more open to using skin care than the older generation. Just from a demographic shift, we think this category has enormous potential for growth,” Valdes said.

In the fall of 2015, the Lab Series started to roll out a global influencer strategy, and in 2016 named actor Ian Harding, who has 4.4 million Instagram followers, as the first global influencer for the Cooling Shave Cream and Expert Skincare Line. In September, Boselli became the face of Max LS’ Matte Renewal Lotion, in December he starred in a holiday campaign and in January, his yearlong global ambassadorship for Maxellence began. On Jan. 9, a local influencer program launched in the U.S. to support the rollout of Maxellence with guys such as High Fashion Men’s Ryan Clark and A Guy Named Patrick’s Patrick Janelle. The Gentleman Blogger’s Matthew Zorpas, Robin James and Toni Tran did the same in the U.K. Later this year, Luke Ditella will be the face of global campaign, as will pro surfer Luke Davis.

Part of Lab Series’ high-end Max LS line, Maxellence contains the two most premium products the brand has brought to market in its 30 years. The Dual Concentrate serum (it has a dual chamber delivery system that dispenses a white and black formula) and a Singular Cream, both were formulated with space technology and ingredients derived from a meteorite, the Achondrite asteroid. The other key ingredient is Micro-Grav Ferment, a yeast extract perfected in a bioreactor, that was originally intended for use in space.

The serum and cream are twice as expensive as moisturizer from the existing Max LS collection, and if you compare it to Pro LS, Lab Series’ entry level group, Maxellence is about triple the price.