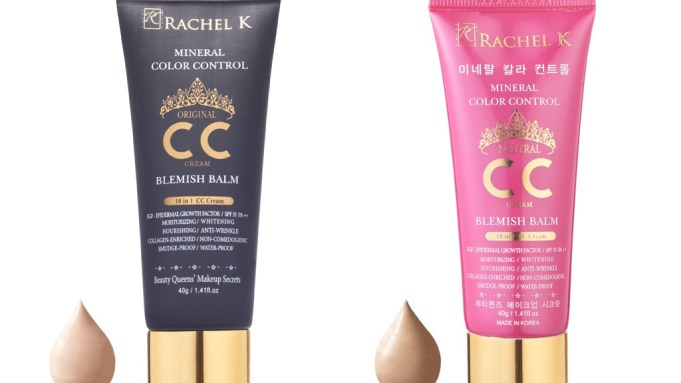 SINGAPORE — In the mid-Aughts, endorsements by Korean celebrities who had discovered BB, or blemish balm, cream helped popularize the German-invented product. Now, beauty queen and cosmetics company founder Rachel Kum is hoping to replicate their feat with CC, or color or complexion correction, cream.

Kum’s company, Rachel K Cosmetics, was among the first wave of firms that brought CC cream to the market about three years ago. These products are lauded for providing a more radiant finish compared to their BB cream counterparts; proponents also say the active ingredients in these creams provide both makeup and skin-care functions.

From its base here, Rachel K now retails its flagship product across Southeast Asia and Hong Kong. But starting this summer, the company will enter four, mainly Western, markets in the United States, Canada, Uruguay and Taiwan.

Rachel K has had one eye on the U.S. for some time. It has received FDA approval for its CC cream and currently sells via online retailers in the U.S. and the United Kingdom. “The U.S. is a fairly large [component of sales] and the product has been very well received,” said Kum.

Still, Rachel K’s CC cream, which currently retails in two versions — one for yellowish skin tones and one for more pinkish hues — will be revamped ahead of its launch in new markets this August. New packaging will be introduced and parabens will be removed from the cream’s ingredients. “Western customers are a bit more particular about paraben products, which a lot of CC creams have, so this will help us stand out,” Kum said.

The product, which currently sells for about $39 in most markets, will also see a slight price bump. “We don’t have the same distribution as Lancôme or Chanel but our target [customers] are still high end,” said Edouard Dorize, Rachel K’s managing director. In the U.S., Rachel K is planning to launch in beauty salons and clinics; the firm is also looking to retail at stores like CVS and Sephora. Sales for Rachel K’s CC cream products totaled about 1 million Singapore dollars, or $789,453 at current exchange, last year. The company projects revenues to double this year, largely to due its entry into Western markets.

An endorsement by Zing, the Hong Kong-based celebrity makeup artist, also gave Rachel K the cachet to move from beauty salons to the shelves of Watsons, one of Asia’s larger health and beauty retailers. “He helped us a lot by endorsing a product that was then relatively unheard of because [retailers] then believed my product would sell well to a mass audience,” said Kum, who said the beauty queens and Zing were paid for their endorsements.

Kum’s frequent appearances in local society magazines alongside Eduardo Saverin, the Facebook cofounder who now resides here, also bred much chatter on social media and a story in U.K. tabloid The Daily Mail that Saverin was an early investor in the company. Kum denied that Saverin was an investor but in an interview aired on Channel News Asia, a regional television station, a few years ago, he spoke admiringly of “her discipline to go along the process…it really inspired me that she went from Miss Singapore to pushing her line, growing her passion, trying to make this happen.”

As Rachel K enters the country that Saverin famously left however, it will face competition from well-established labels like Chanel and Clinique, which have since released their own CC cream formulations. Kum however, remains sanguine about her chances. “These companies spend on million-dollar campaigns educating the public that CC cream is a new trend,” she said. “They’ve helped us evangelize the market, which is the reason why lots of distributors are now interested in distributing us.”