“The cap was a gift...and I thought it was badass. I do think Roger Goodell should give me season tickets for the rest of my life.”

Actor Rob Lowe has received many compliments over his life and career, including for his role as Chris Traeger in NBC sitcom “Parks and Recreation,” but the compliments about his skin left an indelible mark and resulted in the founding of his skin-care line, Profile.

Lowe launched the grooming and skin-care line in 2015 after being stopped on the street numerous times by people curious about his skin-care regiment, and also because he wanted to teach his sons — and other men — about grooming and looking their best.

“What I’ve realized since I was in the business is I had people taking care of my skin even when I wasn’t. It’s part of their jobs,” Lowe said about the makeup and hair artists that he has worked with over his 40-year career in entertainment. “I’ve learned what works for me and to be able to share that with guys and come up with a line around that simplicity has been really, really fun.”

Lowe recently expanded his Profile line with the launch of Profile|Cobalt, an affordable, luxury skin-care collection that includes products like a power wash for hair and body that is formulated with aloe vera, green tea extract and pro-vitamin B5, an acne-control face wash made with tea tree and ginger root, and fragrance-free performance shave gel formulated with aloe vera and guarana extract. The seven-product range retails between $8.95 and $11.95 and is available on the brand’s web site and Amazon.

“You want to come up with a line that has all of the right ingredients and no toxins and something that’s simple,” Lowe said. 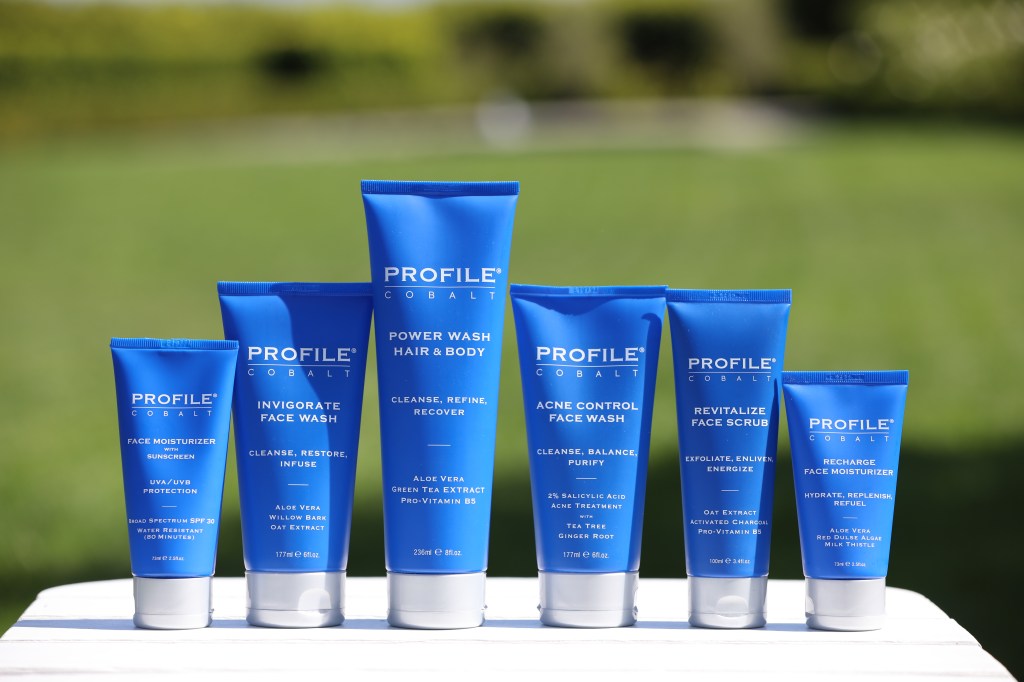 It also has a major charity component.

“It’s a story I believe in and the Wounded Warrior Project is representative of the best version of ourselves, which is at the heart of Profile|Cobalt,” Lowe said.

The actor is also supporting Wounded Warrior during Super Bowl LIV by donating $1 to the organization for every person who takes a selfie of themselves watching the big game between the San Francisco 49ers and Kansas City Chiefs. “Like most people, I love football and the Super Bowl and I wanted to find a way to get the word and the brand out,” he said. Entrants can also win tickets to see Lowe’s one-man show, “Stories I Only Tell My Friends.”

“It’s basically a stand-up act, but it’s also about raising a family and being a father and being in recovery, getting sober, what it means to be a man and all within the context of a lot of laughs,” Lowe said about the show.

“Stories I Only Tell My Friends” is named after Lowe’s 2011 memoir that is the first of two books he has written, along with his 2014 follow-up “Love Life.” “I’ve written two best-selling books and instead of doing another, I wrote a one-man show,” he said.

“It’s taken me almost four decades in the business to realize what I am as a storyteller and that’s either entertaining you with a story or being a conduit,” he said. Lowe has taken the show on the road and will perform in Las Vegas on Feb. 15 at the Criss Angel Theater at Planet Hollywood. “Just to be able to play Las Vegas is a bucket list thing for a creative person,” he said.

The Screen Actors Guild Award-winning actor and Emmy and Golden Globe Award-nominee also stars in the new Fox drama “9-1-1: Lone Star.” Lowe stars in the Ryan Murphy-produced spinoff of “9-1-1” as Owen Strand, a firefighter captain who was diagnosed with cancer. Lowe said that Murphy, who created shows like “Nip/Tuck,” “Glee,” “American Horror Story,” “Pose” and “9-1-1,” wrote the role specifically for him.

“I’ve always been a Ryan Murphy fan,” Lowe said, “and it’s got that Ryan Murphy mix of weird characters that you wouldn’t see anywhere else.” The actor also said the show was Fox’s highest rated premiere in 11 years.

Lowe also recently went viral for attending the NFC Championship game between the 49ers and the Green Bay Packers the night before the premiere of “9-1-1 Lone Star” in a cap bearing the NFL shield logo. Viewers took to social media to joke about the hat and Lowe’s impartiality. Vox Media sports blogging site SB Nation joked that Lowe was ready to substitute “in case a ref gets hurt.”

The actor enjoyed the memes and found them “hilarious,” but why did he have the cap in the first place?

“The cap was a gift,” he explained. “There wasn’t a cap that had 49ers or Packers, and I thought it was bad ass.” He joked as well, “I do think [NFL Commissioner] Roger Goodell should give me season tickets for the rest of my life.”

As for Super Bowl LIV, Lowe said he will just enjoy the game even though his favorite team, the Los Angeles Rams, are not playing. Instead, he believes the other team from California will win.

“[Kansas City Chiefs quarterback Patrick] Mahomes is one of my favorite players, but I think the Niners will win. I always pick defense over offense.”