From stem cell manipulation to skin regeneration, high-tech innovations are the name of the game for first-half skin care. 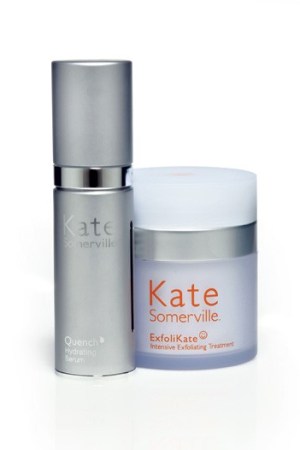 This January Olay is adding 14 Day Skin Intervention, a two-week intensive firming and hydrating treatment, to its Regnerist portfolio. The treatment, which consists of 14 individual doses divided into two phases, uses the Regenerist line’s signature peptide-B3 complex in higher concentrations than the original to firm skin and diminish wrinkles for a purported skin overhaul in a shorter time frame. “The first phase initiates cellular regeneration, pairing moisturizers with the Olay peptide-B3 complex,” says P&G Beauty’s principal scientist Mary Johnson. “Phase two contains a high concentration of the complex to fill wrinkles and improve the skin’s barrier function to give skin a lifted look.” Industry sources estimate the product, which will retail for $24.99, could do between $20 million and $40 million in first-year sales.

In an effort to slow down the aging process, Estée Lauder is putting its faith in the antioxidant resveratrol, the featured ingredient of its Re-Nutriv Ultimate Youth Creme. The company has developed a more stabilized form of resveratrol called resveratrate, which it claims penetrates deeper and produces more concentrated levels of resveratrol to extend the life span of skin cells. “For the first time we are entering in the domain of genetic aging,” says Daniel Maes, senior vice president of research and development for Estée Lauder. “In the past we were always talking about prevention or repair of the effects of premature aging. We are now making cells live longer by reprogramming cellular division and saving the number of cellular divisions you are entitled to.” The cream hits counters in February and retails for $250.

Clarins wants to change the way consumers view moisture with the January launch of HydraQuench. Each of the five stockkeeping units, which will retail between $48 and $56, are formulated for a specific skin care type in either a hot or cold climate. “HydraQuench takes into account the modern lifestyle and is a moisturizing system that’s not one-size-fits-all,” says Caroline Pieper-Vogt, senior vice president of marketing. “We’re speaking to who you are, where you live, how you live and where you go.” The line features katafray bark extract from Madagascar to help synthesize the production of skin’s natural moisturization factors. Industry sources expect first-year sales to hit $5 million.

Clinique is seeing red this January with the introduction of Redness Solutions, a four-sku line ($16.50 to $39.50) targeted at correcting irritated skin. Says Beth Spruance, vice president of global treatment marketing for Clinique, “In talking with dermatologists [we realized] there are multiple types of redness, and that not all redness is created equal.” For people with what the brand calls “reactive skin,” the line offers a hydrocortisone-based cream called Urgent Relief. Persistent redness, like rosacea, requires more vigilance and for that Clinique created three products, an oil-free cleanser, a green-tinted hydrating cream and an oil-free SPF base. The cream features white, yellow and red teas to soothe skin and caffeine, sucrose, algae and resveratrol to correct redness over time. Industry sources expect first-year U.S. sales for the line to reach $10 million.

Eyes will get a double dose of treatment in January when Good Skin unveils a two-part eye cream, Eyliplex-2. “Because of the long laundry list of issues that women have in the eye area, in order to best address each of those individually, you have to split things up into two different formulas,” says Shaunda Swackhamer, executive director of product innovations for BeautyBank. Step one is a day gel with cork oak and sweet almond extract to firm and tighten the eye area. Step two is a night balm that uses Haloxyl PFE, an extract from the passionflower, to get rid of dark spots by clearing away excess pools of hemoglobin. The two-part system will retail for $39.50.

On the first-aid front, Neutrogena will introduce Skin Aid in January, an all-in-one cream meant to treat everything from minor cuts and burns to bug bites, using glycerin, allantoin and petrolatum to heal faster. Meanwhile, German brand Dr. Hauschka unveils its line of Holistic Home Remedies, also in January. The organic remedies, which range from ingestible cold and flu relief to a topical wound compress, are formulated to strengthen the body’s healing system, not just suppress the physical symptoms of the sickness. “We’ve always said about our skin care that the approach of beauty has been through the lens of health,” says chief executive officer Mirran Raphaely. “With the remedies we get to explain why that is and how our brand makes products that address human health.” Dr. Hauschka sells over 1,000 remedies in Europe; eight will be launched in the U.S., selling for $10 to $20.

Christian Dior Beauté introduces a high-tech addition to its Capture portfolio with Capture R 60/80 XP, a four-sku line on counter in January, that uses technology based on stem cell research. The line, which will retail for $60 to $85, utilizes a new delivery system that Dior says targets the skin’s adult stem cells and releases a wrinkle-fighting complex to help them repair and fend off damage, stimulating cell regeneration in the process. “[Stem] cells are being used in many areas of research,” says Dior global medical advisor physician Neil Sadick. “This is a breakthrough in that it is the first product shown to modify these cells in terms of slowing down the aging process.”.

With the Hydramax + Active line, Chanel focuses on the root of the problem for dryness. Using ceratonia PFA, a fruit extract derived from the carob tree and purified through the brand’s polyfractioning technology, the three-sku collection is said to strengthen skin’s natural moisturizing factor—the binds in between skin cells that lock water in. Hydramax + Active hits counters in March and will retail for $55 to $105.

Celebrity aesthetician Kate Somerville, whose clients include Kate Walsh, Jessica Alba and Debra Messing, has big plans for 2008 with the expansion of her eponymous L.A. Skin Clinic. The original space, which measured 3,500 square feet, will now encompass 8,000 square feet with the addition of a private treatment area for Somerville’s upscale clientele. “The expansion will allow us to introduce a space dedicated to privacy, service and glamour,” says Somerville. The newly expanded space will open in January, to be followed with a higher-priced line of products by the end of 2008.

With the release this month of Instant Gratification, Prescriptives introduces its first peel. “We like to consider it a facial, a peel and a microdermabrasion in one,” says Marianne Russo, director of product development for Prescriptives.“It has both physical and chemical exfoliation benefits. In our clinicals, we got results comparable to a 30 percent glycolic peel, with less irritation.” The product, which will retail for $45, uses glucosamine and beta hydroxyl acid to exfoliate and resurface skin, as well as self-heating magnesium sulfate encapsulated with silica to soften skin and open pores.

This month Care by Stella McCartney launches Nourishing Night & Day Cream ($80), which uses organic cupuacu and fatty acids from Brazil nuts to create a protective film that mimics the coating that surrounds babies in the womb. The lipid-based biofilm is said to protect skin from harsh climates and pollution while buriti, an extract derived from a South American palm tree, helps dry skin to restore itself.

The antiaging market is going au naturel. With its first foray into the antiaging market, Burt’s Bees relies on pomegranate to fend off free radical damage in its four-sku Naturally Ageless line. “Aging is a natural process,” says senior brand manager Paula Alexander, “so our view is that you really ought to be addressing it naturally as well. There’s a real misconception on the market that you need harsh chemicals to address the signs of aging when really it’s just about making sure you are keeping the skin as healthy as it can be.” The products will retail for $24.99 each and will be on shelves in February. Meanwhile, Aveeno will expand its Positively Ageless line, which launched early last year, with Positively Ageless Lifting & Firming day and night creams launching in January ($19.99 each). Utilizing the line’s proprietary natural shiitake complex, the products also contain wheat protein to target ageing skin.

Körner gives dark circles and puffiness the boot this March with Loaded The Eye Cream, an extension of the Australian brand’s Loaded antiaging line. Using a blend of active ingredients like hematite, coffee, green tea, iris bulb extract, cranberry seed extract, biopeptides and orchid extract to even out skin texture, reduce puffiness, moisturize and smooth fine lines, the cream will retail for $110 at Henri Bendel and Apothia at Fred Segal.

Looking to nutrition as an inspiration, Darphin expands its Fibrogène range with three products targeted at very dry skin. Describing dry skin as hungry and lacking nourishment, Darphin is using oils of coriander, avocado, jojoba and sweet almond along with shea butter, olive extract, vitamin F and myrrh to provide skin with high doses of lipids to prevent wrinkles, tightness and dullness. The products, which range in price from $150 to $165, will be available starting in February.

La Mer will bring its patented deconstructed waters to a cleanser in January called The Cleansing Foam. The positively charged waters purportedly attract negatively charged dirt and makeup, so skin doesn’t need to be scrubbed, leaving it clean and refreshed without being irritated. The foam, which will retail for $65, also contains magnetized tourmaline to mineralize skin, sea algae to create a more luxurious foam and crushed jade and pearl to refinish skin.

The makeup brush company Adesign is out to show women that brushes aren’t just for their cosmetics with the launch this month of the Skincare Brush Set. The set contains five of the brand’s synthetic makeup brushes, all rebranded to be used in different parts of a skin care routine, from cleansing and exfoliating to applying blemish treatments. According to Shana Marshall, the co-developer of Adesign, hands carry all sorts of oils and bacteria, which are distributed all over the face when people use their hands to apply skin care products, leading to irritation and breakouts. When properly maintained, the brushes purportedly eliminate this buildup of bacteria for healthier skin. The set will retail for $60 at adesignbrushes.com.

U.K.-based pregnancy line Mama Mio wants to extend its client base in January with the Zap collection. The five treatment products are based around the concept of skin elasticity and focus on rectifying skin issues that affect mothers new and old, like stretch marks, scars, crepey skin and cellulite.  The products, which range in price from $38 to $70, are paraben- and petrochemical-free and use omegas 3, 6 and 9 to address elasticity and gravity-related skin sagging.