The brand will release SD Advanced Intensive Concentrate for Wrinkles & Stretch Marks, which is said to impart visible results in 15 days. 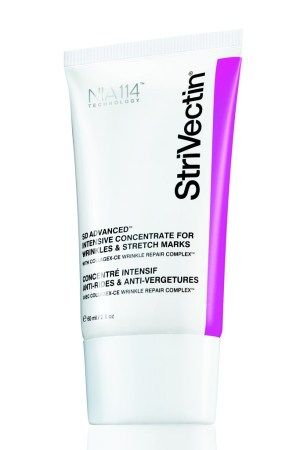 StriVectin, the brand known for tackling skin ailments with a professional focus, is kicking into higher gear.

In March, StriVectin will release SD Advanced Intensive Concentrate for Wrinkles & Stretch Marks, which is said to impart visible results in 15 days. The product contains an updated proprietary collagen-stimulating complex and it follows the brand’s original formula. One tube of the original formula is sold every 59 seconds globally, according to chief executive officer of StriVectin Operating Co. JuE Wong.

“We took this cult classic often credited with starting the cosmeceutical category and went back to the lab to create a new groundbreaking age-fighting formula with state-of-the-art highly active ingredients proven in clinical trials to help visibly transform skin and fight wrinkles,” said Wong, adding that more than six million tubes have been sold around the world since its launch. “We look at aging in its totality and wanted the best recipe for addressing the length and depth of wrinkles.”

The brand created the new complex based on research into collagen type III, or “youth collagen,” which is most abundant at birth and decreases as a person ages. It contains an improved peptide technology — said to more deeply penetrate skin — alongside an energy molecule that supplies skin with amino acids and copper. This technology is paired with StriVectin’s patented NIA-114 complex for even more profound results, according to Wong.

“A unique aspect of this formula is its ability to target not just the commonly known collagen type I, but also collagen type III,” she said. “It’s the highest concentration before going into the drug claim.”

Although brand executives would not share financials, industry sources estimate SD Advanced Intensive Concentrate for Wrinkles & Stretch Marks —  $139 for 4.5 fl. oz. and $79 for 2 fl. oz. — could generate $45 million at retail via approximately 2,800 doors in North America.

In the U.S., key retailers will include Ulta, Sephora Inside J.C. Penney, Macy’s, Bloomingdale’s, Dillards, Nordstrom and the QVC direct-selling TV network.

Another upcoming offering from the brand is the StriVectin-AR Advanced Retinol Serum, which will be launched in May in department stores and specialty retailers. The $119 product, called “the most powerful retinol” ever launched by StriVectin, contains the highest retinol levels of any StriVectin product, yet is said to work without irritation on the skin due to the inclusion of NIA-114. Wong said the brand constantly incorporates new technological findings into upcoming products in order to keep customer results as dramatic as possible, which she calls “key” to consumer loyalty.

“We find replenishment purchases doing very well and that is the litmus test that our products work,” said Wong, underscoring that StriVectin is the number one exclusive skin-care brand in Sephora Europe and the number-one independent skin-care brand in U.S. department stores. “We aren’t regimen-based; we want every stockkeeping unit to stand on its own.”

“We aren’t looking to expand distribution, we want to expand globally and be deeper in the markets we are in,” she said, adding that Asia is “becoming huge.”

In fact, industry sources estimate its South Korean business at $12 million since it entered in January 2013.