The business, known for its neck cream and patented NIA 114 molecule, is now profitable.

StriVectin has pulled back to move forward.

The L Catterton-backed business has been undergoing a turnaround under chief executive officer Joan Malloy since 2016. When she came in, the business was overdistributed, with too many stockkeeping units. And while the previous team had focused on running the brand’s hero ingredient, NIA 114 — a patented form of niacin and Vitamin B3 that is meant to strengthen the skin barrier and help other ingredients perform better — through the product line, the sku count simply got too big.

“The brand at one point was in other categories, like hair. Our strategy was to step away from that — there’s way too much runway for skin,” said Malloy.

StriVectin hired key executives, including a chief marketing officer and chief digital officer, and a head of international that was stationed abroad (the previous head was based in New York), and started to rein in some of the excess distribution and stockkeeping units.

That meant cutting Saks Fifth Avenue and Bloomingdale’s, Malloy said, as well as the entire hair category — something close to her heart, as a former veteran of Alterna Haircare, Fréderic Fékkai and John Frieda. Then it was time for the business to home in on its hero ingredient and hero products, Malloy said.

The goal became to continue to drive that core business with StriVectin’s core Gen X consumer. “There were not marketing efforts and programs to reach out to that consumer base,” Malloy said.

To target those customers, StriVectin launched a new neck cream — StriVectin TL Advanced Tightening Neck Cream — which has helped boost the neck category by about 30 percent, Malloy said. The brand also launched its Multi Action line, which is made up of products with multiple benefits. “We were bringing in products that were accretive to the business and noncannibalizing to the core business,” Malloy said. The business also developed its acids line.

Then, it turned to Millennials.

StriVectin launched a specific range for the demographic in 2017 called Nia, which stands for “not into aging.” Certain products from the line, like a mousse peel-off mask, or the serum-infused moisturizer, have done well, while others — like Tech Neck neck cream — haven’t.

“People love talking about it — it’s a fun story…but it was very hard to get people to actually purchase it,” said Emily Stoler, vice president of global marketing at StriVectin. StriVectin hasn’t yet decided whether to pull the product, Malloy said.

“We’re focusing on the fact that we’re cruelty-free, paraben-free, all of our free-ofs, and we’re really focusing on the undeniable science of our patented molecule,” Stoler said. 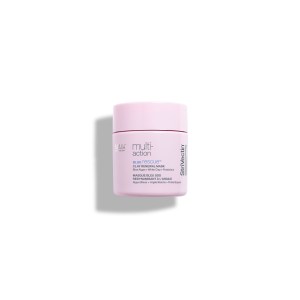 The brand has revamped its distribution strategy, and is leaning hard into the club channel — something Malloy didn’t always feel so strongly about.

“One question I asked L Catterton before I joined was, ‘how penetrated was the business in Costco? In the club channel?'” she said. At that point, the club channel was not seen in a positive light. “The landscape has evolved, and we have evolved with it,” Malloy said.

“Department stores are declining. It was a very difficult decision at the time, but we made it. We shut down Bloomingdale’s, we shut down Saks,” Malloy said. “The prior management thought it would be great to showcase the brand, but at the end of the day, it was about, ‘does it make sense, are we making money?’”

For some channels, the answer was “no.”

That’s a lot of change in three years — and so far, it seems to be working. Industry sources said StriVectin has about $80 million in net sales and has increased earnings before interest, taxes, depreciation and amortization considerably (and is now profitable). Asked if that means the company — which L Catterton bought in 2009 — is ready for its next owner, Malloy declined to comment. But industry sources said the company has tapped Houlihan Lokey to do a deal. Houlihan and StriVectin declined to comment on a potential deal.

Going forward, StriVectin is planning several core product launches, including Skin Reset for early next year when consumers are focused on self care, and Blue Rescue, a mask that turns blue upon application. Right now the majority of Strivectin’s business comes from the U.S., with about 5 percent coming from international. Now that the brand is on track, Malloy expects to pick up steam in geographic markets, especially Asia, where the brand is sold cross-border into China.

“International is a key opportunity for the future, but where the business is today…if we just keep doing what we’re doing, we’re going to probably increase our business by 50 percent,” Malloy said.

The other still-untouched opportunity for the brand lies with Nia 24, StriVectin’s professional line. “That is like a little gem to us,” Malloy said. “It’s just waiting for us to wrap our arms around it and give it some love.”