Tria Beauty Charges Up Its Acne Franchise With Positively Clear

The company has revamped its six-year-old blue-light device to make it sleeker and cheaper. 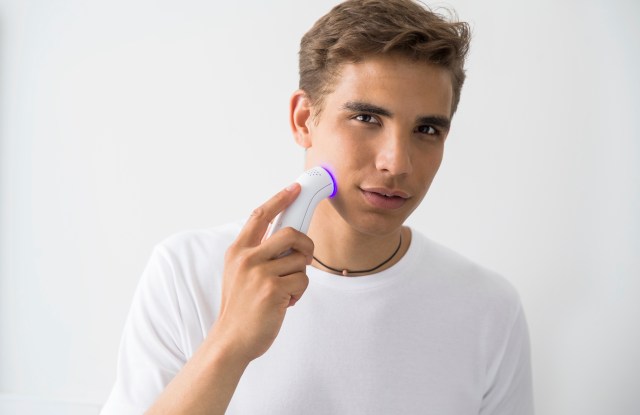 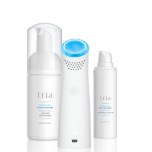 Tria Beauty has taken up the difficult task of trying to figure out what teenagers want.

Over the past year, the beauty device company studied the skin-care preferences of the elusive coming-of-age set to determine how to refresh its six-year-old blue-light technology offering that takes aim at the bacteria triggering acne breakouts. The result is Positively Clear, a stand-alone brand under the Tria umbrella that centers on a $169 three-step system comprised of the FDA-approved device Acne Clearing Blue Light, Foam Cleanser and Spot Treatment.

Hat tip to Proactiv, Tria turned to the system approach for Positively Clear after learning teens don’t think acne can be beat with a single solution. “People want more than just a device. They want cleansers, moisturizers and spot treatments, and there is a believability if these all come together in a system. That rang a bell for us, and got us to sell something other than just a device,” said Peter Wyles, president and chief executive officer of Tria. “We feel it is a new model for us going forward.”

Tria’s goal for the Positively Clear system is to spur replenishment. “In the world of fast-moving consumer goods, you want to sell customers more than one thing and increase their lifetime value. When you are just selling a device for a specific purpose, you often just have a one-time engagement,” said Wyles. “What beauty devices have struggled with, and I wouldn’t say anybody has conquered, is how do you increase engagement and create more revenue for a company? That led us to Positively Clear.”

Even without the associated skin-care products, the good news for Tria as it embarks on Positively Clear is that interest in blue-light remedies is widespread. In its internal research, Tria discovered almost half of acne sufferers are aware of blue light, a figure so considerable that it surprised vice president of global brand marketing Michaela Griggs, although she noted the caveat that it’s common to suppose blue light is the province of doctor’s offices and not be familiar with the consumer options.

“Though there is an awareness of blue light, there may not be a full understanding of what it does and how it is different from topicals,” said Griggs. To reach adolescents and help them distinguish blue light from rival acne fighters, she underscored Tria has to talk to them in their language on the platforms they depend on to communicate. The company will rely heavily on Snapchat, YouTube and Instagram to spread the word about Positively Clear, which is strategically launching this week online rather than across Tria’s extensive retail network spanning Ulta Beauty, Bloomingdale’s, Sephora, Macy’s and Barneys New York to cater to Generation Z members’ and Millennials’ digital inclinations.

“We think the online model is very valuable to this target, but we are looking at the retail channel, where it would make sense,” said Wyles, pointing out Tria’s sales are already split between direct-to-consumer destinations and retail. “We want to be very specific to them. They are operating a lot differently, and they are rewriting the rulebooks. We want to be on their team. The look and feel of this brand is completely different from other Tria products.”

The Positively Clear Acne Clearing Blue Light is slighter than its predecessor. Heather Tanner, vice president of clinical, regulatory and quality systems for Tria, suggested it’s easier for teenagers to grip and control. “The prior generation was longer and had a rectangular shape. It was more difficult to orient around facial features and areas of high interest to acne like the bridge and side of the nose,” she explained. Wyles elaborated, “We want it to be more intuitive an experience for them as opposed to something big and beautiful that sits on a shelf. It’s edgier and fits more into the lifestyle of teens.”

No matter the shape, costly products don’t suit teen lifestyles. The price of the earlier blue-light device verged on $300, and Tria was intent on lowering that price to make teens comfortable forking over their money — or their parents’ money — for Positively Clear Acne Clearing Blue Light. “The first generation device was much more expensive and really excluded a lot of people,” said Wyles. “Especially in the acne space, they may spend a significant amount of money over time on repurchases, but that big upfront $300 stopped people in their tracks.”

Another complication for Tria is that people often don’t fully fathom what they are spending their money on in the device segment and why they should choose to spend on one device versus its competitor. Tanner stressed the onus is on Tria to drive home Positively Clear Acne Clearing Blue Light’s power, and the clinical evaluations that underpin it showing 96 percent of users with mild to moderate acne noticed improvement in skin clarity at eight weeks and 100 percent reported fewer breakouts within the same period. Much of the company’s message will be relayed in the form of reviews, testimonials and before-and-after images depicting the reduction of customers’ acne blemishes.

“We find that there is a very wide range of power output and our product has the highest power density of all the products available. We realize that this is a very unique trait of our device given that it has such a strong safety profile. It is very well tolerated with minimal side effects. We feel that this relative advantage, but differentiation is not readily apparent to the consumer,” said Tanner. “Some devices are extremely vague about what they are actually doing and the primary mechanism of action. There should be a discovery process by the consumer and an attempt to understand how devices compare.”

If everything goes as planned and customers respond positively to Positively Clear, Wyles forecast Tria’s revenue will eventually be divided into thirds with the acne, hair removal and antiaging categories each accounting for one-third of the business. Hair removal is the largest category today. “We are redefining the acne franchise from the way we had done in it the past and are doing things differently from what others have done. It’s a big deal for us, and an important objective for us over the next year that’s going to define how we approach antiaging as well,” said Wyles, adding, “We are not going to be L’Oréal or Estée Lauder putting out thousands of different sku’s. We just want to put interesting things out there that others haven’t stumbled upon yet.”