The personal care giant is launching new higher-end ranges as part of its Dove, Dove Men+Care and Lynx brands. 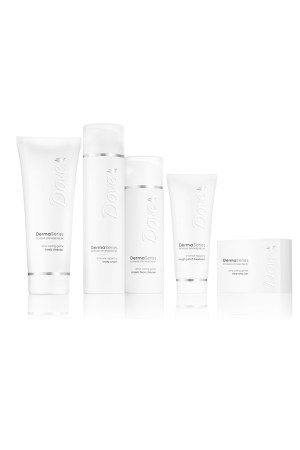 LONDON — Unilever is taking a step into more premium products, with the launch of new higher-end ranges as part of its Dove, Dove Men+Care and Lynx brands, driven both by its insights into customer behavior and the firm’s research into new formulations.

The personal care giant is launching two new Dove ranges: Dove Derma Series, a face and body range developed with dermatologists and targeted at extremely dry skin, and Dove True Tone, an underarm dark-mark eraser. There is also a new Dove Men+Care Expert Shave range, which Unilever calls a “caring shave experience,” along with Lynx Platinum Series Matte Effect, a hair styling line. The Dove men’s and women’s ranges launched Thursday in Selfridges in London, as part of the department store’s new campaign, The Beauty Project. There, Dove is sponsoring an area called The Salon, which is hosting debates organized by Dove and debating forum Intelligence Squared. The products will be exclusive to Selfridges in the U.K. for six weeks.

Mark Bleathman, vice president of personal care U.K. at Unilever, said during a preview of the lines in London Wednesday that while Unilever’s brands are known for appealing to a broad demographic, “what’s probably not as widely known is what a strong R&D team we have, and how technologically excellent our products are.”

Bleathman said the new ranges had been born out of Unilever’s insight into its customers’ behavior, R&D investment and input from industry experts. In the case of the Dove Derma Series, Bleathman said certain customers were looking for intensive treatments for dry skin, but from products that are “cosmetic, sensorial and beautiful,” rather than products that have a pharmaceutical feel. Meanwhile, Dove True Tone, a product that aims to erase underarm dark marks, came from the firm’s findings that women were concerned about uneven skin tone in that area.

Bleathman described Unilever as “moving from a position of credibility to more specialist and premium areas,” but underlined that alongside the new premium ranges, Unilever would maintain its presence in the mass arena. “We’re making a move into the premium area but that’s not at the expense of, or a departure from, our core area,” he said.

Bleathman declined to comment on sales predictions for the ranges, but he noted that he sees Unilever’s customers buying into both premium and mass lines. “[Premium and mass] ranges are coexisting, so my view is that we should be offering for…not just one segment. We haven’t been [present at] that top end until now, but we have had the R&D and formulation that justifies being there,” he said.

Bleathman said that Unilever is now looking toward the “next wave” of premium products to launch, which will be driven by its insights and research.