The company, which has slimming and beauty centers, launched a antipollutant face care range this week, priced at under $2. 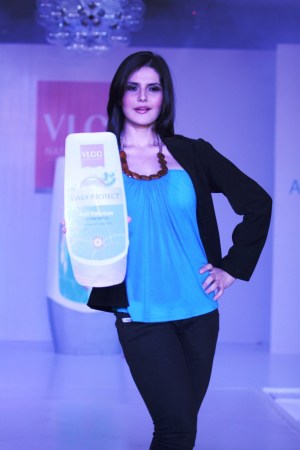 Furtuna Skin, Sourced From a Private Farm in Sicily, Is Growing

NEW DELHI — VLCC, an Indian FMCG company which has an estimated annual turnover of $100 million, has entered the mass market. The company, which has slimming and beauty centers and more than 150 stock keeping units of beauty products along with exports to 11 countries, launched a antipollutant face care range this week, priced at under $2.

Bollywood actress Zarine Khan flew into Delhi to unveil the range, with which the company plans to enter the $735 million skin care market, 78 percent of which is in the mass segment.

The antipollution range will retail in more than 100,000 outlets.

VLCC looks to make this a $20 million line over the next eight to 12 months, said Ashustosh Bharadwaj, chief executive officer, VLCC Personal Care, which is a wholly-owned subsidiary of VLCC Healthcare.

The range includes a multi-use sachet for 20 cents, face washes for $1 and the antipollution lotion for $1.60 and claims to use natural ingredients such as green tea and orange to protect skin from oxidative damage, pigmentation and early aging. The range also caters to other growing segments — fairness and acne care — with two products.

Sandeep Ahuja, managing director, VLCC Healthcare said that the seven sku range would create a much larger customer base for the company and this would be supported with a spend of more than $2 million across media. This would include a strong T.V. campaign. He added that personal care, which contributes to more than 20 percent of the company turnover, will continue to grow strongly in coming years.

Other important components of the business, including slimming, beauty treatments will continue to grow as well, as also the training institutes for beauty.

India’s wellness market is growing at an approximate 30 to 35 percent rate per year according to a report by FICCI-Ernst and Young in 2009. Less than 5 percent of the market is in the organized segment and VLCC has benefited from its strong branding and consistent growth in both the metros and in smaller cities, with more than 163 slimming and beauty centers in 102 cities in India.

Despite its lead in this segment, Ahuja said that the company “takes the competition seriously”, including local salons, fitness chains and Kaya skin clinics, all of which have a different focus, but are broadly in the same category.

In the product segment, VLCC’s has far more competition — Lotus Herbals, Biotique, Shahnaz Herbals, etc., in the natural product segment, but “we have a niche with products that we see are missing from the market.” he said. This is also an area in which there is not much competition from Western brands.

“We are growing in our international business as well,” Sandeep Ahuja said. “We have added three new countries —  Sri Lanka, Bangladesh and Qatar this year and plan to open in Dhaka and Doha by the year-end and Kuwait early next year,” he said.

The retail segment for products is also being strengthened with standalone stores called Beauty Zones, where select products are retailed, along with a skin analysis and a section on grooming. These are being opened in malls and will continue to grow in the coming year, he said.