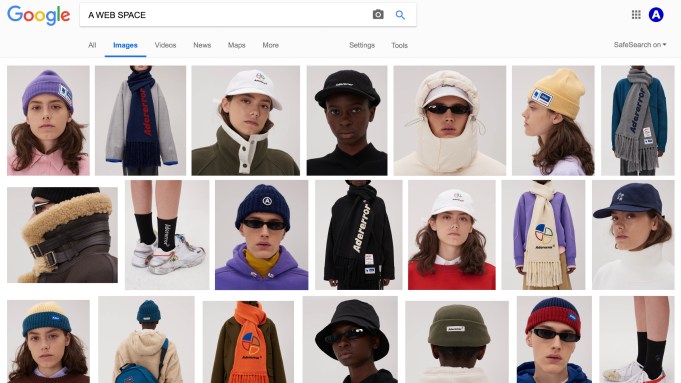 Ader Error is making a big business out of intellectual streetwear.

The Seoul-based brand, founded by an anonymous design collective in 2014, offers a strategic hodgepodge of unisex clothing.

Ader, as is the case with many fashion labels, uses elements of the past as a means for moving forward. The brand has labeled its own unique take on nostalgia as “futro” — a mashup of futuristic and retro. “Basically everything is based on a retro mood, but we express our identity with futuristic factors to make a contemporary, new kind of trend,” the brand’s collective told WWD.

Their silhouettes, design details and marketing are often inspired by early-Internet aesthetics. While this concept has long been prevalent among indie fashion ventures, Ader is one of the first large-scale fashion companies to mine visuals from the Windows ’97 era.  Ader’s sold-out RS-100 sneaker from a recent collaboration with Puma — which included an awkward block of rubber jutting out from the heel — recalled the clunky greige computers and Nintendo Game Boys that its Millennial-aged designers had grown up using.

Ader releases two main collections a year, with all apparel produced in South Korea, typically priced from $40 to $300. The label purposefully limits each collection’s production to spur desire among its clientele. Ader said more than 90 percent of each collection sells out. The brand’s secondary slogan “But Near Missed Things,” is a poetic attempt at explaining its mission to create fashion that is “Something normal but special and something easy but different,” the crew said.

Ader’s futro mantra has resonated with Millennial consumers, helping the product-focused brand grow by 300 percent in the last year. While originally a direct-to-consumer business, the company has opened its showroom’s doors — signing Selfridges, Galeries Lafayette and the acclaimed Tokyo streetwear store Gr8 among its stockists. Ader counted 39 stockists for fall and will expand its roster to 60 retail partners for spring 2019.

In early September, Ader made its U.S. retail debut at Kith, where it set a pop-up store for two weeks. Though little-known in the U.S., “We were drawn to Ader Error’s combination of bold colors and graphics mixed with unisex, slightly oversize twists on familiar silhouettes. The outerwear is very strong, the price points are accessible, and the quality is excellent. We are always looking for fresh, relevant voices in the global marketplace, and Ader Error’s creativity and freshness makes them stand out among emerging designers,” Kith’s men’s buyer Justin Dean told WWD of the company’s decision to partner with the brand.

To spark additional growth and notoriety, Ader continuously engages with like-minded brands on collaborative product. “It is not just about a product collaboration, but more about creating an entirely new communication based on each other’s identity. We’re studying how we can communicate with people, media and platforms every day,” Ader’s collective said.

For fall, the company will release collaborations with Eastpak and Alpha Industries. In the spring, it will release a second collection with Puma. Ader Error is also finalizing an agreement with Maison Kitsuné to work on a second apparel and accessories collection to be released in the spring.

In the meantime, the company is searching for a second Seoul flagship location. Ader currently operates a stand-alone shop in the youth-driven Hongdae neighborhood. It also has a robust e-commerce business.

The brand’s web site is redesigned twice a year to suit its seasonal collections’ aesthetics. Currently set up as a desktop home screen circa 2006, Ader’s site offers an immersive experience that nods to the nativity and joy of early-Internet connectivity. As they explained: “The art branding is what we did, do and will continue to do. That is the way of our communication.”