Shoppers are slowly returning to brick-and-mortar stores, according to Adobe’s Digital Economy Index.

Beating the summer slowdown in retail is a feat in and of itself — but analyzing changes in consumer behavior during the coronavirus pandemic is a whole different animal, according to Adobe’s Digital Economy Index.

Its index indicated a subtle return to brick-and-mortar stores as retailers have continued to reopen across the U.S. between June and July, causing online shopping to slightly wane. Albeit, U.S. e-commerce sales reached a record-setting $66.3 billion in July — but its growth is slowing, even though sales are up 55 percent year-over-year, according to the firm.

Powered by Adobe Analytics, the index is based on the analysis of more than 1 trillion visits to sites and 100 million-plus stockkeeping units, measuring transactions from 80 of the top 100 U.S. retailers, which is more than any other company, according to the brand. Eighteen digital consumer basket categories are drawn from for analysis of the DEI, including apparel; books; groceries; jewelry; personal care products; and sporting goods.

The index revealed that since March, the pandemic has resulted in $94 billion extra spent online, with the first seven months of the year (January to July), accounting for $434.5 billion in online spend.

Vivek Pandya, senior digital insights manager, Adobe Digital Insights, said, “Online shopping has seen massive growth through 2020 as households have adjusted to new ways of shopping during the pandemic. July e-commerce growth backed off its record highs as consumers began returning to some brick-and-mortar stores and spending levels dropped as households tightened their belts due to falling employment levels and looming cutbacks in unemployment benefits.” 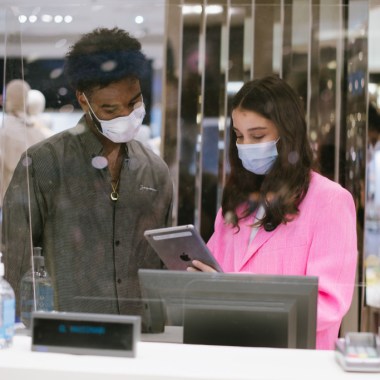 E-commerce sales waned in states that have reopened, according to Adobe Digital Insights.  Vanni Bassetti/WWD

“Despite this, e-commerce remains strong, up 55 percent year-on-year with sales expected to surpass the total for 2019 by Oct. 5 of this year, well before holiday season sales begin to ramp up.”

As states reopened and brick-and-mortar shopping became an option for consumers, its index saw an 8 percent smaller year-over-year increase in online sales in July, versus states that still had stay-at-home orders at the beginning of the month, according to Adobe Digital Insights.

A revitalization in buy online, pick up in-store (BOPIS) has continued to see strong year-over-year growth, which suggests it may have some lasting power: BOPIS accelerated slightly, at 23.3 percent, in usage over June, “amid a second wave of increases in COVID-19 cases across the U.S.,” the company explained.

More seasonal trends, such as back-to-school, are wholly contingent on when — and if — school ever starts. “Work from home and distance learning boosted online purchases of school supplies in April, May and June. This has resulted in slower growth in this sector during the usually-busy summer restocking months. While July’s numbers are down from the April to June period, the sector’s 30 percent growth this year is still much higher than the 3.89 percent growth in July 2019,” according to the firm.