If the year 2020 could, at this early juncture be named anything, it would be no exaggeration to assign the word Canceled.  Globally COVID – 19 has wreaked havoc on well-worn routine, plans, and schedules.  Events, travel, rhythmic agenda, and even people have been consumed by the maelstrom, in an ever-expanding, a seemingly unending firestorm of Canceldom.  And yet, there are projects achieving fruition, plans reaching completion, and events celebrating goals achieved.  In Yokohama, Japan one such opening occurred this past June when Tokyo based real estate developer and retailer LUMINE celebrated the completion of their latest building NEWoMan YOKOHAMA.

Concessions to the new world order were made, originally scheduled to open May 30th, the opening was pushed back nearly one month too late June to accommodate local viral caseloads.  For the grand opening, normal advertising lead in announcements was restricted while future campaigns will be reviewed relative to their impact on visitation; consumer-facing messaging is limited to LUMINE owned web and social media channels. To keep traffic at acceptably safe levels a reservation system has been implemented which was heavily subscribed during the first week of operation when 160,000 customers visited in the five days from opening Wednesday through the weekend.  Early demographic consumer breakdowns are encouraging both diverse in age and gender.  Customers from their early twenties to mid-sixties have visited, predominated by female visitors in their 30s both local to the Yokohama area and from neighboring Tokyo.  Consumers are visiting solo, with their significant other or with the family and while many of LUMINE NEWoMan’s tenants are luxury offers new to the Yokohama region, local consumer reaction has been supportive, spurred on by design-conscious millennials. 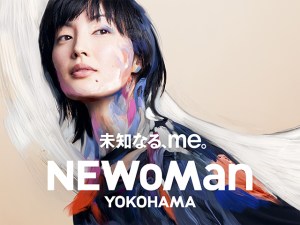 Designed by architectural firm, Atelier Tsuyoshi Tane Architects, design principal, Tsuyoshi Tane researched the history of global port cities seeking to imbue the 10 stories building with qualities reflective of characteristics unique to seaside centers of commerce.  The firm designed a narrative space wrapped in titles from all over the world; evoking the brick buildings of Yokohama during the Meiji period (1868 to 1912). Recognizing an opportunity created by an expansion of rail service from Tokyo, LUMINE has sought to obtain rider’s attention at NEWoMan YOKOHAMA- which as in Shinjuku straddles the station – rather than simply transiting through on their way to neighboring Kanagawa or back towards central Tokyo.  The building establishes a clear landmark and multifaceted point of interest. 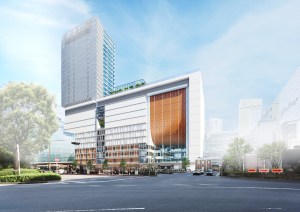 LUMINE has taken lessons learned from its NEWoMan SHINJUKU site and applied them to the Yokohama building.  Overall each client tenant has larger footprints to work with providing an opportunity for each brand’s universe to more thoroughly communicate to patrons.  The enlarged common and shopping spaces allow for a more surprising merchandise mix than is possible within the more limited confines of Tokyo.  Broadly, the building has arranged its tenancy over each floor in a manner defined as “lifestyle”.   There are no food courts or sectors of cosmetics, nor areas siphoned off for only women or men; rather each floor employs a mix of shops, lounges, and cafes suggesting customers explore floor by floor.  Companies as varied in purpose, scale, and message inhabit a dynamic mix that includes Gucci, Balenciaga, Blue Bottle coffee, Pola, Aēsop, The North Face, Freemans Sporting Club and Birkenstock to mention but a few.  LUMINE management believes a mix that defies categorization, and in many cases, expectations will differentiate NEWoMan YOKOHAMA from its competitors, offline and online.

To further burnish LUMINE’s commitment in supporting smaller developing brands the Yokohama location follows its Shinjuku forebears in presenting a dedicated incubation space, dubbed 2416 MARKET.  Here products are locally sourced from the broader Yokohama area focusing on the unique lifestyle needs of nearby residents; who by both consumption and production these small companies benefit through broader exposure the LUMINE NEWoMan platform provides.  In turn, LUMINE has created a direct connection to the local community as an active stakeholder. 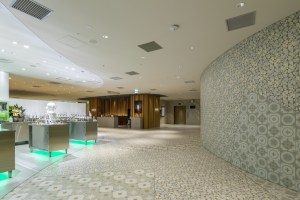 Someday, hopefully soon, schedules will resume, plans will be executed, projects completed and celebrated with some degree of normalcy.  One only has to think of 2021 and the postponed Tokyo Olympics to recognize the special feat LUMINE has pulled off in 2020 while also soundly positioning themselves to accommodate what in all likelihood will be a well spring of pent up demand, not just for consumption and commerce’s sake, but for social interaction and discovery within six feet.