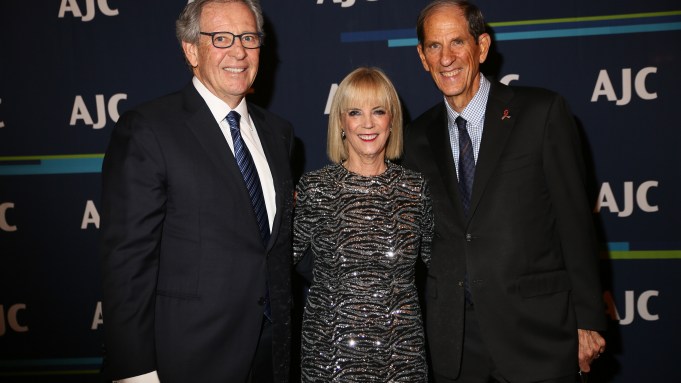 NEW YORK — “My dad was a Holocaust survivor. I understand what prejudice really is. With the work of the AJC, the whole world becomes a better place.”

The emotional event Wednesday night at The Pierre hotel here drew 500 supporters of AJC, raised $2.4 million for the human rights organization and put the spotlight on AJC’s mission and the two industry leaders from far different backgrounds and experiences who nevertheless came together to help a humanitarian cause. AJC fights anti-Semitism and human rights violations around the world, is an advocate for Israel and aids those in desperate situations.

“AJC is first and foremost about inclusion,” said Hamilton upon accepting her award from Jean-Paul Agon, chairman and ceo of L’Oréal, who flew in from Paris for the event. She acknowledged she was initially nervous about getting involved with the organization and accepting the award since she’s not Jewish. But she said she became “a student” of the AJC and the Jewish community and visited Israel for three days to meet leaders of the country, including a female brigadier general. “In Israel, yes, women are equal,” she said.

Agon said Hamilton is “tenacious in philanthropic commitments,” which include advancing ovarian cancer research, gender equality and working with UNICEF. “These two are business superstars,” said Michael Gould, who chaired the event. “Morris and Carol exemplify business leadership in its deepest sense.”

Goldfarb talked about how his father, Aron, survived the Holocaust, and brought him to the U.S. at age six. His father started G-III. Goldfarb’s life, of course, was much different from his father’s in Poland. “I never had the experience of being taunted for being a Jew.”

Once, when visiting Poland, Goldfarb by chance saw a construction site where a cemetery, destroyed during the war, was unearthed. Members of his father’s family were buried there. Goldfarb told his father he would rebuild the cemetery and dedicate it to the family. But the elder Goldfarb objected adamantly, fearing the cemetery would only again be desecrated. “That’s how traumatized my father was,” Goldfarb said. “He had a lasting fear of anti-Semitism.”

Goldfarb didn’t relent over the years. His father finally agreed, just ten minutes before he died, to let his son rebuild the cemetery.