Predicting the House of Amazon, or Amazon Ad Agency?

Is Amazon building a fashion house or advertising agency, and how are sellers diversifying to platforms such as eBay and Walmart right now?

Feedvisor's "The State of the Amazon Marketplace" report for 2019 revealed sellers' greatest threats and opportunities.

Amazon has been quietly building out its fashion house since it launched Lark & Ro, Amazon’s private women’s label estimated to have reached nearly $10 million in sales since launching in 2016. According to a study by Jumpshot, a marketing analytics platform, Amazon has more than 80 percent of market share across categories on average, leading with its electronics category. But according to Gartner’s L2 digital index, 86 percent of its private-label business is in the apparel, shoes and jewelry category.

In its report, “The State of the Amazon Marketplace 2019,” Feedvisor, the AI-powered predictive business intelligence firm for Amazon sellers and brands, many sellers are using the marketplace to expand revenue and reach — through investing in ad spend — but many still feel threatened by Amazon, but not for any reasons pertaining to its private labels.

The main concern for Amazon sellers is still “direct competition with Amazon,” according to 44 percent of survey respondents. Feedvisor completed its survey between April 4 to 24, polling more than 800 adults online. Despite sellers’ fears existing in both the competitive product and private label arenas, the majority of sellers or 68 percent don’t feel threatened by Amazon’s private label brands. Intrusive thinking guides sellers on Amazon, and in the me-first push to stand out among the crowd, ad spend is guided by pay-per-click advertising, alongside Amazon’s clear momentum in its ad business. In 2018, Amazon became the third-largest ad seller in the U.S., trailing Google and Facebook. Some 74 percent of respondents use the ad suite to drive discovery and conversion, with “Sponsored Products” and “Sponsored Brands” being its popular options. Product promotion methods cited by respondents also included social media and search marketing.

With growth of Amazon’s internal advertising offerings, third-party software companies are seeking to bait sellers with advantages, increasingly AI-powered. According to the report, many sellers have yet to boost ad placements with third-party bid optimization software. With third-party software powered by AI algorithms, such as services offered by Feedvisor, more and more sellers may look to outside tools to increase advertising effectiveness and efficiency to edge out competitors in ad campaigns or optimization of listings, among other means. As Amazon focuses on improving its dynamic ad business, alongside teasing more private-label launches, its seller community also seeks to improve: strategic advertising (51 percent), ratings and reviews (49 percent) and inventory management and product content (both at 45 percent). 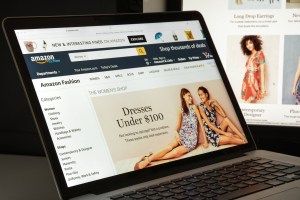 In last year’s report, Feedvisor cited diversification to other marketplaces as the keen business motive, yet this year attention is being redirected back to the “Everything Store,” with “expanding existing product lines on Amazon” as the main business objective for 2019. The percentage of sellers who plan to expand to Walmart (17 percent) and eBay (10 percent) declined from last year by 8 percent and 9 percent, respectively. For 53 percent of respondents, eBay makes up less than 20 percent of total e-commerce revenue and for 46 percent of respondents, walmart.com assumes the same portion of revenue at 20 percent. With Amazon expanding its one-day prime shipping, Walmart recently activated its NextDay free delivery, piloting the program in Phoenix and Las Vegas, as reported in WWD.

Frank Poore, chief executive officer of CommerceHub, believes “Amazon still has the breadth and depth of products that others simply don’t,” and until then, retailers will follow suit. With that, sellers will continue to prioritize their product offerings on Amazon, until customer experience is matched on competitor marketplaces.

Jon Weber, managing director at L.E.K. Consulting LLC, added that for brands on Amazon, the goal is to “position in a more dynamic way to differentiate and drive conversion,” cited as part of an overall push for 50/50 strategy for digital and physical retail, which the company includes in its business intelligence for many brands in fashion and footwear. 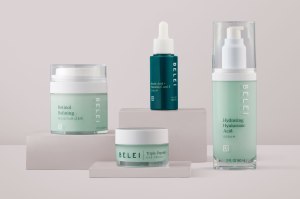 In 2018, Amazon experienced its first crescendo: a milestone $1 trillion valuation for the first time last September while posting $178 billion in revenue. Amazon recently launched its private-label skin-care line Belei on March 20, and in October 2017, Amazon released its eight-brand portfolio to “build its own fashion empire.” The new skin-care brand is housed alongside its luxury beauty offerings, including products from hair-care brands such as Oribe and luxury brands such as Burberry. Of the 800 Amazon sellers surveyed, 62 percent of them have private label products in their inventory, while 25 percent of those sellers rely solely on private label business. In its fashion category, Amazon also touts women’s wear label, Ella Moon; casual men’s wear, Goodthreads; as well as children’s wear, Scout + Ro, among others.

A majority of consumers are more likely to buy products from Amazon than other e-commerce sites, which echoes a recent sentiment backed by CPC Strategy’s 2019 Amazon Consumer Survey revealing how spending is led by Gen Z females, whereby 93.3 percent, spend up to $100 on Amazon every month, as previously reported in WWD.

With the consumer actively shopping Amazon, it’s no doubt sellers of every size are seeking to gain market share by allocating additional ad spend. But as the data infers, Amazon’s most viable business opportunity is not its private label, but rather its advertising.

‘Fake Reviews’ May Be Popping Up on Amazon