A report from Coresight Research and DataWeave revealed the top apparel listings on the online giant's site.

In a deep dive into Amazon‘s fashion apparel offerings, the bulk of what’s listed is non-branded, or “generic” products, according to a report from Coresight Research done in collaboration with DataWeave. The data was compiled last September and included year-over-year comparisons.

After analyzing the top 30 brands on Amazon Fashion, where “95 percent of purchase activity occurs,” authors of the report said, non-branded “topped the ranking by number of products in September 2019, with very substantial growth of 906 percent over the previous year.”

The release of this research follows a WWD report from earlier this month that said Amazon was gearing up to launch a fashion concession model in the U.S. featuring luxury brands.

In the Coresight Research report, Deborah Weinswig, chief executive officer and founder of the firm, said when “we analyzed the 30 combined men’s and women’s categories, we discovered that the generic label featured in the top three brands for 60 percent of the categories — 18 out of the 30.”

The research revealed more than 849,000 apparel items across 2,600-plus brands in 24 categories — in men’s and women’s fashion apparel. “Activewear is a top apparel category on both men’s and women’s apparel on Amazon.com, and Nike has the largest number of listings on each,” Weinswig said in the report. 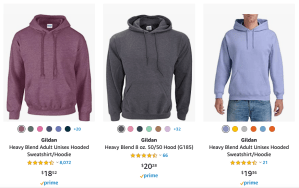 Digging into specific brands sold and excluded the generic or non-branded listings, the research found that the most-listed brands were InterestPrint, Hanes and Gildan.

Weinswig said in the report that InterestPrint has “50,437 product listings on Amazon Fashion, and none are listed by Amazon — 97 percent were listed by third-party sellers and 3 percent were out of stock as of September 2019.”

Overall, Weinswig said third-party sellers on Amazon Fashion are “thriving” by garnering 87 percent of apparel listed, which compares to 84 percent in the previous report.