All About the Journey: Amazon Luxury Looks to Tmall for Inspiration

Amazon's new app is about a lot more than simply selling luxury goods.

A shot of the View in 360 interactive feature.

LONDON — It may be called Luxury Stores, but Amazon’s new invitation-only app is about much more than selling expensive designer clothing.

The app points squarely to Amazon’s ambition to own a share of the “discovery experience,” online, to mine the sort of data it doesn’t currently have access to, and to cross-market to its precious Prime customers.

Industry figures say the race is on among online retailers — and service providers such as Afterpay and Klarna — to become go-to platforms for brand discovery and storytelling. While these sites may be transactional, they also aspire to be hangouts, social spaces and places where customers can learn and engage with brands.

“Discovery, in a safe space, is a concept that is huge in Japan and China. And these sites want to own the discovery experience,” said Mo White, a London-based business consultant with a background in online retail, digital marketing and brand building.

It’s no wonder that Amazon, a marketplace for nearly every consumer product imaginable, would break into luxury via an app.

Luxury Stores wants to be the glossy, sealed-off environment — away from the car accessories and the fridge freezers — where Amazon can celebrate the fabulousness of fashion, where it can create brand stories and tempt Prime customers who maybe hadn’t considered buying luxury in the past. 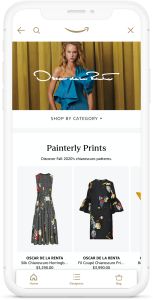 Oscar de la Renta is the first designer to open a store on the app, which will stock the pre-fall and fall/winter 2020 collections, including ready to wear, handbags, jewelry, accessories and a new perfume, with children’s wear coming soon, according to Amazon.

The online giant said U.S. Prime members can browse exclusive styles from Oscar de la Renta “throughout the season.” In addition, they’ll receive early access to the fall 2020 collection, which is only available in de la Renta’s boutiques and web site.

To mark the brand’s launch on the app, Amazon created a video meant “to entertain and engage” customers — and got all the cool London kids on board. The video features the model and actress Cara Delevingne and was directed by Bunny Kinney, editorial director of Dazed. It was styled by the American celebrity stylist Jason Bolden.

The site will also offer a “View in 360” interactive feature allowing customers to explore styles in 360-degree detail to better visualize fit, making shopping for luxury “easier and more engaging,” according to Amazon.

Alibaba’s Tmall has long known what keeps people lingering on the site — and coming back for more: Tmall employs an army of influencers to keep viewers interested and engaged, it livestreams content and offers up short, snappy videos to ensure that customers’ eyes remain locked on screens for as long as possible.

“Amazon is probably thinking, ‘If Alibaba can do it in China, why can’t Amazon do it in America?’” said one source, pointing out that Amazon dwarfs Alibaba in terms of revenue. With takings of $296.3 billion in 2020, Amazon is more than four times larger than Alibaba, although its operating profit, at $14.1 billion, is only slightly higher than that of its Chinese rival.

An invitation-only app helps to enrich that customer journey of discovery. Not only is an app easy for Amazon to control and expand, customers feel more invested than they would browsing on a desktop. 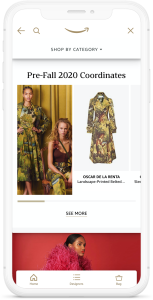 In addition, sources told WWD that Amazon is already planning to work with the luxury brands on the app for TV, film and streaming projects going forward — all important offerings to Prime subscribers.

It is also already creating content around young designers: Jonny Cota, the “Making the Cut” winner, saw his Metamorphosis collection launched in April on Amazon after he won the site’s fashion reality competition series and $1 million prize. He’s being mentored by Amazon and, crucially, also has access to its sales data.

Becoming a place of discovery — and infotainment — isn’t Amazon’s only play: White also believes that the new, by-invitation app will also provide “clean” data for Amazon, which will be examining shopping behavior, conversion rates and how many “non-fashion” Prime members are willing to snap up Oscar’s fit-and-flare styles and dangly earrings.

Based on the data, the online giant has an opportunity to cross-market brands within the app, and match customers to specific products.

The brands benefit in myriad ways: Amazon is understood to be giving them full control over the look and feel of their virtual stores, allowing them to sell as much as they please, control when or if they go on markdown and — crucially — leverage Amazon’s speedy delivery and customer service platform.

As reported, sources said a sprawling warehouse is being built in Arizona to accommodate the platform, while a $100 million marketing campaign is in the works.

With the wholesale model in crisis, and online sales soaring during lockdown, the Amazon proposition must have proven irresistible for the smaller — and less buzzy — brands in particular, many of which have been struggling with the always-present risk of earlier and deeper markdowns at the multibrand retailers.

Amazon is offering the look and feel of a direct-to-consumer site, backed up by its delivery muscle — the warehouses across the U.S., the air cargo fleet, the same-day service. Logistics is a major draw for high-end brands, which all know how impatient their customers can be.

Alex Bolen, chief executive officer of Oscar de la Renta, said he went with Amazon because of its “relentless focus on improving the customer experience through constant innovation, utilizing technology and customer feedback. We admire Amazon’s customer-centric focus and look forward to telling our brand’s story in compelling and engaging ways to even more customers through the Luxury Stores experience.”

Unlike Oscar de la Renta, many luxury brands polled by WWD rebuffed Amazon’s offer of joining the app — including the Kering and LVMH Moët Hennessy Louis Vuitton ones — preferring to rely on their own databases, marketing knowhow, e-commerce and wholesale relationships, instead of getting mixed up with a company that’s still best known for books, everyday consumer goods — and utilitarian web site driven by algorithm rather than style or design.

But whatever Amazon’s real play is here, luxury competitors are keeping a beady eye on the retail behemoth.

“Never underestimate Amazon, it’s such a successful business,” Neves said. “Our data and our conversations with brands indicate they [Amazon] are still far away from getting traction from the industry,” Neves said. “But we’ll keep a watchful eye.”

The private equity owners of Matchesfashion are most certainly keeping a watchful eye, too.

Bernstein’s Luca Solca said he believes Amazon could “play a significant role in multi-brand fashion and luxury digital distribution,” given that it satisfies certain criteria.

He said the by-invitation-only format is clever and creates a “separate venue à la Tmall’s Luxury Pavilion,” but that Amazon also needs a certain set of brands to give the initiative critical mass. He said Oscar de la Renta alone looks like a “soft opening” to him, so the online giant will clearly need to pull in some hotter names.

Solca also pointed to the value of the Amazon app’s concession model, which gives the brands control of their pricing and the fact that Amazon has exclusive sourcing deals with brands.