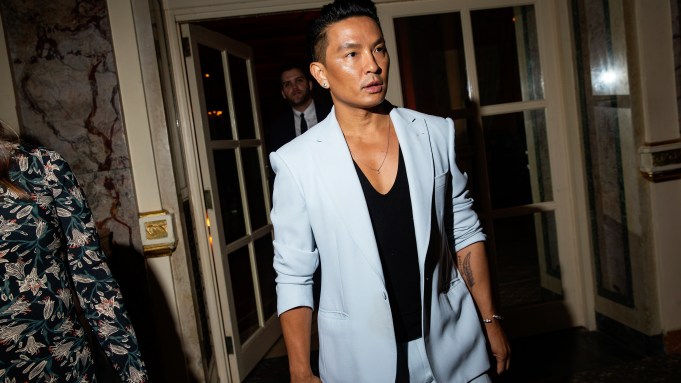 Chip Bergh, president and chief executive officer of Levi Strauss & Co., was named Person of the Year, and Gap Inc., accepted  by CEO Sonia Syngal, was awarded Company of the Year. ThirdLove, accepted by cofounder and CEO Heidi Zak, was selected Fashion Maverick and Prabal Gurung was named Designer of the Year. The Ellen MacArthur Foundation’s Fashion Initiative won the Eco-Steward of the Year.

“It is exhilarating to be in person and to be with all of you. And how great is it that we are all here together in person,” said Steve Lamar, president and CEO of the American Apparel and Footwear Association, which hosts the event. “There’s no question that the industry we look at now is very different than the one we supported when we were last gathered in this room. Together, we are on a path of sustainable change.” He said the night’s honorees were leading that change, translating the pandemic lessons into new sources of strength “so we can build a better industry and a better world.”

In accepting the first award for Eco-Steward of the Year, Andrew Morlet, CEO of the Ellen MacArthur Foundation, said on videotape: “The Ellen MacArthur Foundation and its network are accelerating the transition to a circular economy. It’s great to see such purpose today, but there’s clearly a lot more to do. The foundation is looking forward to the American apparel and footwear industries setting bold ambitions for positive impact that go beyond incremental improvement.”

Diggs, president of the CFDA, which is celebrating its 60th year, said that through the CFDA Scholarship Fund, more than $2.7 million has been awarded through 320-plus scholarships for tuition and living expenses between 1996 and 2021. For 2022, the CFDA Scholarship Fund will distribute $500,000 in scholarship awards to students. The funds raised at the American Image Awards will support the CFDA’s educational and social impact initiatives.

In accepting the Fashion Maverick Award, Zak said she and her partners founded ThirdLove to give women bras with comfort and style in mind. When they first started, they were approached by a local shelter in San Francisco that desperately needed undergarments. She said she learned that so many lingerie brands send their excess products to the dump because they are afraid their products would land back in the market. “We knew we could do better at ThirdLove and that’s what we did. Today, we are one of the largest donors of bras and underwear in the country with more than $50 million worth of product donated to date.”

She also told an interesting story about turtles. She said she read a New York Post story about injured turtles that crack their shells. Every year thousands of turtles are injured from boating accidents and they need care. She donates bras so the hook and eye closures can adhere to their shells and it helps them gradually recover from their cracks. ThirdLove also holds bra swap events where customers can bring in an old bra from any brand, and it will give them a ThirdLove bra. The next event is taking place this weekend at its new store on Filmore Street in San Francisco.

Gurung said he loves the industry because it has the power to change how we see each other. “For me personally, it has not only given me my identity, but a platform where I can impact lives, whether it’s more than 100,000 lives back home in Nepal through my foundation or listening, learning, engaging and participating in the much needed cultural conversation around change, especially issues related to the marginalized and minority groups. It is also an industry that has allowed me to create my own found family. And I am grateful for that.

“But, it’s also an industry [that] is not devoid of many issues and problems,” he continued. “Yes, progress is being made, but it still remains an industry that often rewards and celebrates only a particular type and idea of beauty, people, race, community, etc. It’s an industry that is deeply impacted, influenced and dictated by the colonial lens and taste. An industry that wakes up to the cultural movement hoping it will be a moment so they can go back to how things were.

“It’s an industry where anyone who looks like me or has any resemblance to any of my friends from the marginalized and minority BIPOC community is still a quota, a box to tick, a decorative display for the front of the house to let the culture and world know that the industry is ‘woke’ while the board room and the decision-making tables remain blindingly white,” Gurung said.

He said his Americanness has been questioned time and again. “These are not woe is me. It really isn’t.…But I am not an anomaly. Ask any creatives of color and ask them what they go through, and the stories you will hear perhaps will make you empathize and hopefully truly understand the trauma attached to the fight against the invisibility of our existence. Yes, despite all our work, we still have to fight for our visibility and validation. We not only have to prove that we are equally good or better because we bring a diverse story that brings so much color to all our lives, but we also have to constantly fight for our Americanness…in this industry, in this country,” he said.

“Therefore, this American Image Award handed to me — an immigrant, a gay man of color — well, the irony of it all is not lost on me,” Gurung said. “I am sharing this with all of you because, despite all the challenges, I am grateful — immensely — for this industry and to you all for giving me this time and space tonight,” he said.

Daniel, founder and CEO of Harlem’s Fashion Row, presented Company of the Year to Gap Inc., and said since 2018, her organization has partnered with Gap to strengthen the pipeline of Black designers coming up in the industry and “unlock doors for a community that fashion has historically overlooked.”

Syngal said with its four divisions — Gap, Banana Republic, Old Navy and Athleta — “we have become a more creative, agile and digitally led organization. I‘m privileged to represent our 100,000 employees, and this award really belongs to them.”

Bergh was presented his award by his friend and colleague Jack Haddad, president of Haddad Brands. Haddad said Bergh was drawn to Levi Strauss’ family history of philanthropy and taking a stand.

Bergh, who joined Levi’s from Procter & Gamble, said he still remembers when he got the call to become CEO of Levi’s and the company was in trouble. He said everybody has a Levi’s story, and he retold his. He was 22, a second lieutenant in the U.S. Army in West Germany. On his first military leave, he took a Eurail trip through the Nordic countries. He said the way you washed your clothes at the youth hostel was you hopped in the shower with your clothes on, soaped yourself down and hung up your clothes to dry. He was wearing his Levi’s 501s and went into the bathroom and put his wallet on the windowsill. He went to bed and the next morning realized he left his wallet in the bathroom. “I ran to the bathroom. My wallet was there, the Levi’s were gone. True story.” He said when he originally got the call from Levi’s, he remembered that story. He thought to himself, “If we could make this brand what it was when I was a kid, we can turn the company around.”

“It has not been me, it’s been the incredible team. I’m not the only one in the room tonight who would say the last two years have been a little bit crazy and probably the most challenging years of my life, at least professionally. Everyone here has had to navigate the pandemic, racial reckoning, massive supply chain disruptions, an attempt to overturn a legitimate election in this country, and perhaps the greatest threat to our democracy since the Civil War, now rising inflation, an unprovoked war of Russian aggression in the Ukraine with some risk of further escalation. There’s been no shortage of moments here, and it’s certainly tested all of us.”

He said the last two years have also been the most rewarding time for him as a leader and a person. “Our company, Levi Strauss & Co., is stronger today than any point in at least the last three decades…the Levi’s brand is the strongest it has ever been today,” Bergh said.

Chip Bergh Makes the Case for Levi’s and Denim