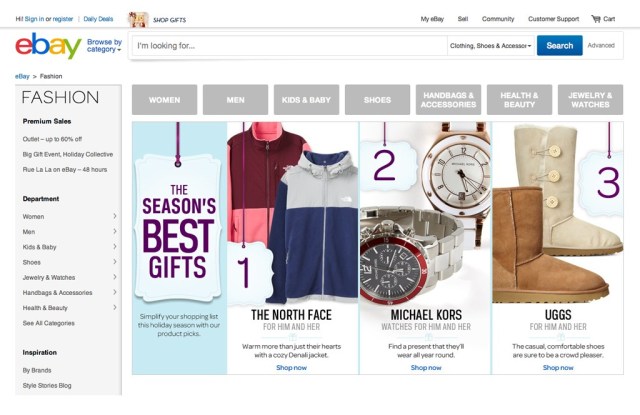 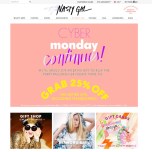 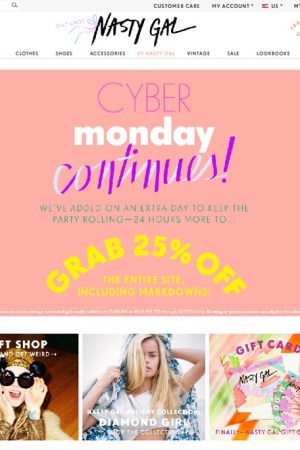 From multichannel retailers to pure play e-tailers, millions of consumers placed an unprecedented amount of online orders, taking advantage of the deals and promotions that nearly every store under the sun offered. Although slightly less emphasis was placed on online spend for the day due to online deals starting as early as Thanksgiving, total sales are expected to increase by double digits from last year, when they totaled $1.25 billion.

While total spending for the day has yet to be calculated, ComScore projected that Cyber Monday sales will reach $1.5 billion, a 20 percent increase from last year.

IBM Corp. released data on Tuesday that showed business for Cyber Monday increased by 30.3 percent from last year, which would mean that sales topped the $1.5 billion mark projected by ComScore. Average orders dropped by 6.6 percent to $185.12, but consumers still wound up spending more due to shopping with greater frequency, IBM said.

According to marketing software company Responsys, Thanksgiving holiday weekend e-mail reached the highest point Monday, with nearly 93 percent of major online retailers sending at least one promotional e-mail to subscribers. However, shoppers referred from social platforms like Facebook and Twitter dropped a substantial 26 percent, according to IBM’s data.

The mobile trend continues to transform e-commerce. IBM revealed that almost 20 percent of consumers used a mobile device to visit a retailer’s site (an increase of more than 70 percent from 2011) and 13 percent of sales for the day were conducted on a mobile device. The iPad was responsible for 90.5 percent of all tablet traffic and 7 percent of online shopping overall.

According to eBay, which expects to see $10 billion in sales via mobile by the end of 2012 (more than twice that of last year), mobile-transacted volume more than doubled on Cyber Monday compared with the same day last year. PayPal reported global payment volume tripled and GSI Commerce saw a 287 percent increase in mobile sales, year-over-year.

At Saks.com, the digital arm of the department store replicated last year’s Cyber Monday deals, which included the designer sale with up to 40 percent off, a beauty gift-with-purchase promotion and the Saks First Double Points event. The retailer called sales for the day “robust,” with handbags, shoes and women’s and men’s apparel among the most sought-after categories.

“‘Nesting with family for the holidays’ now includes online shopping, so Monday is not as important as it once was,” Vitale said, citing gifts (especially the Electric Holiday items related to Barneys’ Disney windows), footwear and accessories as bestsellers. “We will follow the same sale cadence this year as we have and do not plan to accelerate or change any promotions,” she said.

Nasty Gal, the four-year-old company that began as an eBay store in 2006 selling vintage clothing, celebrated its highest sales day ever on Cyber Monday — topping its previous largest sales day (Black Friday) by more than 500 percent. Web traffic to nastygal.com increased by more than 600 percent, and in the last two hours of the day, smartphone and tablet sales accounted for 86 percent of total orders on the site.

Nasty Gal’s 29-year-old founder and chief executive officer Sophia Amoruso said Tuesday that sales on Cyber Monday quadrupled year-over-year and it’s “definitely the biggest day of the year for us.” The day was so successful that the site extended its 25 percent off any purchase through Tuesday.

The e-tailer’s growth has been rapid. According to Amoruso, 2010 saw $6.5 million in sales, and that number multiplied fourfold the following year to $28 million. She projected similar growth by year’s end — which means about $115 million in sales.

HSN’s record-breaking weekend, which kicked off Nov. 21, continued through Monday. According to HSN Inc. executive vice president of digital commerce Jill Braff, mobile constituted 25 percent of all digital sales and 35 percent of traffic for the six-day period that ended with Cyber Monday — and digital penetration was nearly 40 percent. All the best-selling items on Monday were from the electronics category, including Beats by Dre Solo headphones HD with song downloads priced at $199.95 (from $249.95), Nexus 7 Google tablets, Magic Wand scanners and a Garmin GPS system with Lifetime Maps.

While Gilt Groupe ceo Kevin Ryan contended that Cyber Monday is the “key day” industrywide, that is not the case for the flash-sale site. The period between Thursday to Sunday saw 60 percent growth in sales year-over-year, triple the growth Cyber Monday experienced, which was up just 20 percent year-over-year. That said, in terms of actual revenue, Monday resulted in more sales. From Thanksgiving to Monday evening, 27 percent of purchases took place on a mobile device.

“So in absolute amount, Cyber Monday was bigger, but on a relative basis it wasn’t. We have a site that has discounts every day. We find that it’s not a good day to out-discount everyone else. There was more traffic than a normal day so revenues were strong. It’s one of our top three of four days of the year, but not to the degree that it is for other people,” Ryan said, adding that the top-selling brands at gilt.com Monday were M Missoni, John Varvatos Star, Swarovski jewelry and KitchenAid.

Gilt launched its new “Freefall” sale format on Cyber Monday at 11:45 a.m. Offered for select sales within the women’s, men’s, home and taste stores, each of these events lasted only five to 10 minutes, giving the consumer an even greater sense of urgency to shop. Additional Freefall sales followed at 3 p.m., 6 p.m. and 9 p.m., where prices continued to drop throughout the duration of the sale.

The shopping aggregate site drove almost 2.8 million referrals to retail partners the week leading up to and including Cyber Monday, and to date, it has had almost 2.5 million iPhone and iPad app downloads since 2009.

However, at social commerce network Lyst, which operates on a referral revenue model and aggregates the inventories of its retail partners into a style feed, Black Friday was a significantly stronger day businesswise than Cyber Monday. Cofounder and ceo Chris Morton calls “Black Friday the new Cyber Monday,” noting that Friday was the site’s best sales day since its inception, seeing triple the average amount of sales. Lyst, which works with more than 500 brands and retailers from Neiman Marcus to Zara, collected data from partner retailers regarding product that was put on sale and Lyst sent sales alerts to 9,507 users on Friday, more than double the 4,653 alerts it sent on Cyber Monday.

For $1 billion brand Nine West, though, Black Friday was the record-breaking sales day, with sales up 80 percent over last year. The Jones Group Inc. brand, which like many other companies sees Cyber Monday shopping beginning as early as Thanksgiving, saw overall weekend sales that were up 40 percent.