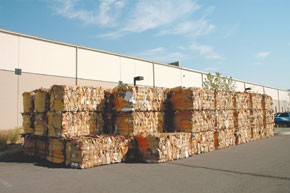 Today, the word green also signifies sensitivity to the environment. In fashion, this may involve any of the following initiatives: sourcing sustainable materials, growing organic fibers, contracting with factories whose treatment of workers is ethical, delivering garments in a way that has the least impact on the environment, reducing energy and chemical emissions and finding unique ways to dispose of waste.

There’s no direct correlation between the size of a company and the level of its engagement in environmentally responsible activities. Some small companies are completely eco-friendly, while others haven’t taken the first step. Large firms may have a harder time harnessing far-flung divisions with many employees, but even a single such initiative can have a big impact.

Wal-Mart has been selling compact energy-efficient fluorescent lightbulbs with the goal of selling 100 million of the bulbs. The retail giant also introduced its most energy-efficient U.S. store, the HE.5 prototype in March, which will use up to 45 percent less energy than a traditional Supercenter. The HE.5 is part of a series of prototypes designed for specific climates. Wal-Mart’s goal is to design and open a viable store prototype that is 25 to 30 percent more energy-efficient by 2009.

Lee Scott, Wal-Mart’s chief executive officer, has said the company is working with suppliers to make the most energy-intensive products in Wal-Mart stores 25 percent more energy-efficient within three years. “Taking waste and nonrenewable energy out of our supply chain reduces the amount of pollution and greenhouse gases our suppliers send into the atmosphere,” Scott said. “And helping our customers buy more sustainable products and be better stewards of the environment reduces their own carbon footprint. This is something that I think all of us can be proud of.”

Although critics argue that Wal-Mart has built more than 2,000 stores since 2005 and fewer than 10 of them are green, a Wal-Mart spokeswoman said all of the company’s stores are built with energy-efficient and environmentally friendly features such as skylights for a daylight harvesting system that can reduce up to 75 percent of lighting energy used in a Supercenter during daylight hours.

Ventura-Calif.-based Patagonia uses solar energy and efficient cooling in part at its corporate headquarters, but admits it needs to study the environmental impact of the company, especially the area of carbon neutrality. In the fall, the company launched an initiative, the Footprint Chronicles, which studies the impact of five products, including wool sweaters and polyester jackets, as they move through the supply chain from sourcing through delivery. “It basically admits that the supply chain is the bulk of the impact,” said Jill Dumain, director of environmental analysis.

Patagonia, which entered the apparel market in 1973, developed a reputation for donating money to grassroots environmental causes that help replenish natural resources that the sport of rock climbing, in part, diminished. But the company soon realized that while it was giving money to protect a river thousands of miles away, local resources were being affected by its manufacturing processes. Patagonia in 1991 commissioned a study to look at its use of fiber. The use of organic cotton and natural fibers grew from that data. Patagonia also uses recycled cotton from Italy, recycled polyester from Japan, natural fibers from the U.S. and Taiwan and wool from New Zealand.

The Patagonia Eco Shell performance jacket contains chemicals and synthetic fibers including a nylon shell, polyurethane coating and polyester lining. The company in 2005 found a way to recycle the jacket, which includes outsourcing to a Japanese company whose mill de-polymizes the polyester so there is no damaging chemical reaction to melting it down.

Nike went one step further, using manufacturing waste for its Trash Talk performance basketball shoe. The footwear manufacturer and retailer has realized a 17 percent reduction in waste and a 30 percent reduction in packaging and point-of-purchase waste. The company is recycling waste back into other Nike products. It has recycled 18 million pairs of used, counterfeit or damaged shoes. Nike has other solutions for waste such as developing waste management centers near clusters of factories that would provide efficiency and critical mass for recycling wastes that couldn’t be reduced or reused in the factories. The company pointed out that in addition to helping create the centers, it has developed the processes for the factories to supply waste to them.

Like all brands at French luxury giant LVMH Moët Hennessy Louis Vuitton, Louis Vuitton must conform to an environmental charter established in 2001. Vuitton began measuring its impact on the environment in 2004 with a goal of reducing its carbon dioxide emissions and raise awareness among its employees and partners.

Finding that 37 percent of its greenhouse gas emissions came from transporting products by air (versus 17 percent for materials used in production and 16 percent for energy consumed in workshops, offices and boutiques), Vuitton now favors shipments by boat or rail. In 2006, 60 percent of leather goods were transported by sea, a method deemed 40 percent less polluting.

What’s more, new and refurbished stores with advanced lighting use 30 percent less electricity, while electrical consumption at Vuitton’s Paris headquarters was reduced by 18 percent. Eliminating excess packaging during shipments also reduced some 132 tons of waste in 2006.

Taking its green policy further into architecture, last year Vuitton opened a warehouse in Cergy on the outskirts of Paris that employs geothermic heating for offices, high-performance insulation, natural lighting and a water-filtering process. It was also situated at a site easily accessible by public transit.

Howies is a fraction of Louis Vuitton’s size, with only a single store, an 800-square-foot flagship on Carnaby Street in London. But the Cardigan, Wales-based brand, which specializes in casual apparel for men, women and children, gave the store many environmental features, such as reclaimed wood and eco-friendly paint. A customer-operated light switch allows lights to be turned on only when needed and there’s a fresh water tap for refilling plastic water bottles. Next year, the brand plans to open a similar store in Bristol, England.

Howies’ collections utilize buttons made from natural and nontoxic South American Tagua nuts and New Zealand Zqüe sustainable organic merino wool chosen for its quality and because it’s shipped by boat, reducing the carbon footprint. Shipments from China are consolidated into a single journey, rather than several separate shipments. The company also tries to curb waste by printing T-shirt designs on-site in Wales, rather than in bulk in Turkey. T-shirts are printed daily in order to prevent waste from surplus stock. By the fall, the brand’s offering will be entirely organic, which is far more important to the company than slavishly following trends. “We are not trying to be too trendy because we want the garments to last. We want to wear them until they wear out, not just until they go out of fashion so they aren’t wasted. So we try to keep it classic,” said co-founder David Hieatt.

Loomstate co-founder Scott Hahn agrees. He said the key to sustainability is understanding the product life cycle. “You [have to] start looking at indirect costs and the environmental impact of your business model,” he said. “Are you polluting? What’s your carbon footprint? What’s the environment of your facility? It could be anything from the products in the bathrooms to the paint on the walls.” Other keys to sustainability include understanding a business’ social impact. “What are the sociological costs to what you’re putting into the market?” Hahn said, noting that these factors can include moral issues, employees’ wages and whether team values are being communicated.

Loomstate is committed to a certain supply chain that “starts at the farm with soil fertility and sourcing organic cotton,” Hahn said. “There are the terms of engagement with the factories. Enforceability is leveraged through contracts. We’re small so we have less leverage, but we’re a marquis brand in the sustainability context. It’s a sexy brand and celebrities are wearing it. When we started, there was no organic cotton denim. We built a culture around this.”

— With contributions from Marcy Medina, Miles Socha and Lucie Greene