Unfolding A ‘Story For All Women’

Bagatelle International, Inc. recently convened press, influencers, and retail executives to celebrate Avec Les Filles, the trend-driven lifestyle fashion brand, as it continues to showcase “fashion that makes women feel empowered and excited to dress.” Entering the next phase of the brand’s evolution, the event explored the Avec Les Filles’ “Past, Present, and Future.”

Avec Les Filles, or translated “with the girls,” was originally a story told by one woman but under Bagatelle International Inc. has since grown to represent a story for all women. At the event, guests experienced the history of the brand beginning with Joyce Azria and explored the brand’s beloved coats of the present. To showcase the future of the brand, guests were introduced for the first time to the Avec Les Filles Girl Army and given a preview of Avec Les Filles first ready-to-wear collection.

Coco Rocha, Tyler Cameron, Hannah Godwin, and Rachel Vallori were among the guests at the bustling event, which commenced with a full step and repeat, interactive video booth, photographers, champagne, and passed macaroons. The space was filled with racks of the brand’s beloved coats, which guests were encouraged to try on.

The event culminated with a presentation of Avec Les Filles’ history, setting the scene with footage of founder, Azria, in Paris in 1982. Azria was quoted describing her motivation for her brand as “a distinct point of view that empowers women from all walks of life.”

The presentation quickly changed to 2019’s New York, New York. Charismatic girls in Avec Les Filles outerwear were seen chatting and exploring the city together. “As girls, we are all ultimately connected and the same. We believe that pieces exist in your wardrobe year after year.”

The brand’s future took the display off-screen as Avec Les Filles introduced ready-to-wear for the first time. Models styled in looks from Fall/Winter 2020 marched forward with fearless tenacity, giving guests an early look at what is to come.

Jamie Litvack, executive vice president at Bagatelle International, Inc., tells WWD Studios about the introduction of the Avec Les Filles Girl Army, shares why Avec Les Filles is making the jump into ready-to-wear, and the inspiration behind a new collection.

The Avec Les Filles Girl Decides What is Relevant

“The Avec Les Filles ready-to-wear line is going to release drop deliveries throughout each season. The preview presented at the event is the new design direction for Avec Les Filles. Starting with one powerful woman, Joyce Azria, to now being inspired by all women past, present and future.”

“She’s influential, educated, and inspired, with a deep appreciation for art, music, and culture. She respects the past and how it shapes her present, from the clothes she wears to the music she sways to.
She’s aware and involved, actively designing her future and evolving into the best version of herself. Seeking out beauty, newness, and inspiration is an innate part of her life. She’s fearlessly expressive, passionate about style, and in love with the possibilities each day brings. She chooses Avec Les Filles because she can find the trends that excite her without falling into step with the masses.
While her personal style is always evolving, she maintains a sense of sophistication, femininity, and individualism.” 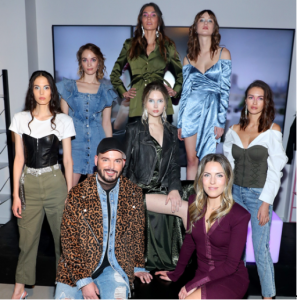 “The customer’s response to the outerwear has been very successful so naturally we want to offer her a growing lifestyle brand. Design-wise it will be an ever-evolving brand inspired by women and their lifestyles, but always staying true to the DNA of Avec Les Filles aesthetic which is retro, street, runway.”

“The first drop titled ‘Antoinette,’ is an introduction to the Avec Les Filles Girl Army,” said Bradley Mounce and Sofia Wahlberg, co-creative directors at Avec Les Filles. “The collection is made of strong powerful looks that still have a playful, femininity and softness to them.”

“There is a combination of two design elements, the 18th-century woman of Versailles and military uniforms throughout cultures and history,” the co-creative directors said. “Strong structured pieces are combined with soft fluid fabrics and corseting details. It is the juxtaposition of the two worlds that push a modern point of view. Satins and feminine prints are layered with broken down denim, washed cotton, and vintage leathers. The choice of this blurring the lines inspiration is to celebrate women, having them feel powerful, edgy and forward but still have wearable ease that embraces femininity and today’s modern woman.”

Consumers are able to shop Avec Les Filles current collection of fashion-forward outerwear, featured at the event, at aveclesfilles.com and find styling inspiration through the brand’s Instagram.