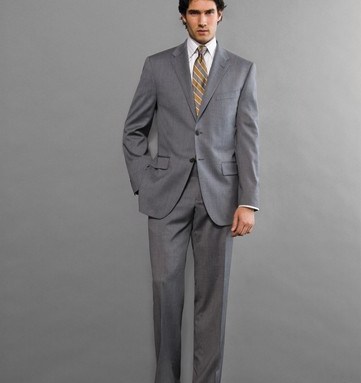 Men’s wear companies are working on their core.

Picky consumers, risk-averse retailers and a cutthroat adherence to the bottom line have prompted many vendors to focus on heritage, brand-identifying products as they downplay product extensions or ancillary classifications.

JA Apparel, the company that operates the Joseph Abboud brand, is farming out major categories to licensees in order to focus on its classic clothing business. Luxury outerwear maker Belstaff beefed up its core offering of iconic waxed motorcycle jackets by creating an in-stock program. And island lifestyle company Tommy Bahama has seen a renewed vigor for its camp shirts, the product that helped establish the brand.

“With so many brands in so many classifications, it’s a matter of how many collections you can show on the floor,” said Mario Bisio, owner of Mario’s in Portland, Ore., and Seattle. “You have to decide and make sure you’re balanced.”

When brands branch out beyond their core, they’re going up against new competitors, many of which are experts in their particular categories. “You’ve got to look at [a brand extension] in reference to the rest of the market,” he said. “There are only so many dress shirts you can sell, so you have to determine who does it best.”

Across the board, men’s wear brands and manufacturers are retrenching as retailers adopt a buying strategy that allows little room for error. The result of this sink-or-swim approach: Fall assortments are heavy on tried-and-tested merchandise and key items that amount to brands’ greatest hits.

“From a fashion perspective, it’s good for a brand to present a holistic view,” said Eric Jennings, vice president and men’s fashion director for Saks Fifth Avenue. “But you can’t hold onto a business unless it’s profitable. At the end of the day, we’re retailers, and it has to sell.”

Jim Jergens, national sales director for Tommy Bahama’s men’s, agrees: “Where retailers used to buy shallow and wide, they now look narrow and deep. The bottom line is that they are looking for key items that can drive their businesses.” For Jergens, that means buyers are assigning more dollars to products that are “identifiably Tommy Bahama,” like print camp shirts, casual knits and easy-fit denim bottoms.

Similarly, Italian company Belstaff has worked to broaden its appeal beyond its iconic jackets via accessories and designer sportswear. But the company said retailers have become increasingly interested in the motorcycle jackets that made it famous, and created a in-stock program to feed the demand.

The merchandise strategy also has impacted preppy accessory and sportswear maker Vineyard Vines, which has funneled resources to its core neckwear collection rather than investing in new categories. Co-founder Shep Murray said the brand’s expanded selection of woven and striped ties should help drive sales with otherwise cautious consumers. “People buy what brands are best known for, but in order to drive business, you need new things,” explained Murray. “Our solution was to make new things within our strongest category.”

The trend toward core products is reshaping JA Apparel’s business. Best known for tailored clothing — which it produces domestically — the brand has decided to license two major categories: sportswear and dress furnishings.

“As business has toughened, it’s harder to compete for shelf space with companies that specialize in these businesses,” said Marty Staff, the company’s chief executive officer. Staff said the deals with the licensing partners are not finalized and declined to name the companies.

However, the move, Staff said, will enable the company to do what it does best: suits and sport coats. It’s launching a private label tailored-clothing program this fall — a company first — and may look into manufacturing for other brands under license.

While the changes will bolster JA Apparel’s position as a suit producer, they also reflect forces that are coalescing in the marketplace: the rise of the specialists.

“The strong are getting stronger,” said Staff. “Those companies in solid positions in a particular category are gobbling up market share. Retailers aren’t going to play around with suppliers in 50 doors. They want players they can do business with.”

Retailers’ drive to focus on the strong and few is good news for classification behemoths like Phillips-Van Heusen, which, even before the market crashed, owned much of the furnishings business. Its share, according to company sources, has only increased since then.

“Department stores are designed to partner with those who give them opportunity to maximize their business,” said Steve Correia, president of PVH’s branded dress shirt group. “We have the scale to leverage workload, expertise and manpower to drive business. To increase your turn, you need critical mass.”

That reality has affected the brands within its portfolio, too.

Major shirt brands — like Van Heusen, which is returning to the former Macy’s Florida and Macy’s West divisions after a long hiatus this fall — have garnered more floor space, but some of the company’s premium shirt brands that have less penetration have lost some placement, according to the company.

“Not everyone can support the co-op, can’t take the margin,” said Mitch Lechner, the president of the company’s designer shirt group. “It’s difficult for smaller players.”

At the better end of the market, Canali said this guarded approach to buying has decreased the adoption rate for its new categories, which include a revamped sportswear line and hosiery. “This has not been the season to launch new categories,” said Giorgio Canali, U.S. president. Instead, the Italian luxury brand has focused on bolstering its heritage suit business by retooling its price structure and offering more options below $2,000 retail. “Business will pick up, but retailers are less likely to try new things in a big way,” said Canali.

That doesn’t mean there aren’t men’s brands that have successfully broadened into lifestyle labels — Polo Ralph Lauren and Giorgio Armani tops among them. Ermenegildo Zegna, which has nailed its move into a variety of categories, also is pointed to by most stores as the poster child for brand extensions, while Paul Smith has a full complement of products, from underwear and shoes to outerwear. And even some of the younger men’s labels continue to add more product categories.

“I feel very positive about brand extensions in general,” said David Fisher, executive vice president and general merchandise manager of men’s wear for Bloomingdale’s. “But it takes time for a brand to become good at a lot of different categories.”

The bottom line, he said, is that all categories “have to match and be compatible” — which can sometimes be a challenge when they’re licensed to other companies.

Fisher said a lot of brands have experienced growing pains. Theory, for example, has “terrific” sportswear but struggled at first with its tailored clothing and dress furnishings. “But they’ve got it down now,” he said.

Same thing for Michael Kors, Fisher added. And Canali needs to improve its design and sourcing in sportswear for it to have more of an impact.

“I do believe in brand extensions, but when they’re well thought out,” he said. “It can be meaningful, but a company has to be committed and keep plodding along at it.”

Tommy Fazio, men’s fashion director for Bergdorf Goodman, said Tom Ford has probably done the best job of all the newer designers in creating a lifestyle collection. Michael Bastian and Thom Browne also have had success. And he believes that Kiton and Brioni moving into sportswear is a potential opportunity for these brands and their retail customers.

Brand extensions “finish the circle,” he said, noting that it gives a manufacturer a chance “to grow the business and reach out to a different customer base.”

“Customers are always looking for something new from a strong brand, even in a down economy,” said Bob Mitchell, co-president of Mitchells/Richards. But it boils down to “execution. It’s like retailers in the men’s wear business wanting to get into women’s. You need the right people [to pull it off].”