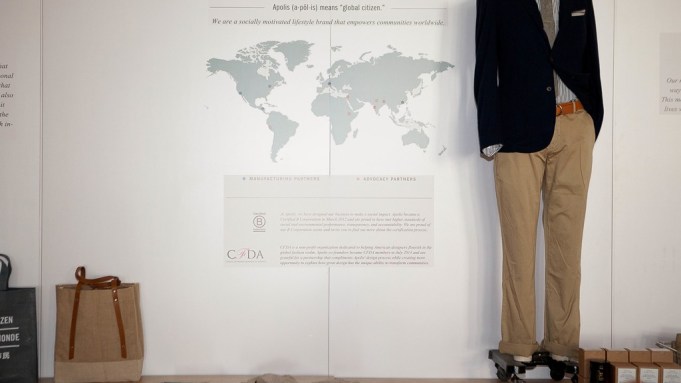 LOS ANGELES — Who would have thought that a toilet could play a role in launching a socially responsible fashion business?

Lee Kimball, chief operating officer of a Pittsburgh-based textile supplier called Thread, was finishing a three-week process last year to become certified as a benefit corporation, or B Corp, when he was stumped by a question determining if his five-person company used a toilet with low water flow. He snapped a photo of the contraption, sent it to the auditor at the nonprofit organization B Lab that was administering the stringent assessment, and waited to get his score to determine whether he would join Patagonia, Warby Parker and Seventh Generation in a growing circle of socially responsible businesses. He passed with a score of 99 compared to a median of 80.

Since receiving its certification in November 2013, Thread, which recycles plastic bottles collected in Haiti and other developing countries to manufacture into textiles in the U.S., has identified around 10 companies interested in buying fabric from it partly because it’s a B Corp. It’s also using its assessment score as one criterion to raise more capital beyond its angel investors, potentially from the U.S. Small Business Administration, Renewal Funds, SJF Ventures and other funds targeting companies that make a positive social and environmental impact.

“For us, it’s a philosophical belief that businesses can be the thing that changes and evolves the world,” Kimball said. “We found that [B Corp status] makes a tangible difference.”

As interest in domestic manufacturing and social compliance increases, especially in the aftermath of factory disasters in Bangladesh and Cambodia and alleged worker abuse in India, a growing number of designers and executives are seeking to integrate practices that improve their employees’ working conditions and the environment with accountability and transparency by becoming benefit corporations.

The B Corp certification is to business what the U.S. Department of Agriculture organic seal is to milk and what the LEED environmental standard is to architecture and construction. As of Dec. 10, there were 1,177 certified companies in 121 industries in 37 countries, including the U.S., Australia, Argentina, Brazil and Portugal. Consultants, lawyers and other service-based occupations represent 64 percent of the businesses that received certifications from B Lab. Companies in apparel, home and personal care and textile sectors make up 8 percent of total certifications.

“The largest hurdle is awareness,” said a spokeswoman for Wayne, Pa.-based B Lab, which started in 2006. “The movement is young, and while many companies have acknowledged that it’s time for a change, few realize that there is a certification that looks at not just the product, but the company.”

Following certification by B Lab, a company has the option to change its legal status to a benefit corporation from a limited liability one, a C corporation or other business structure in 27 states. In California, which legally recognized benefit corporations in 2011, Patagonia became the first company to convert from a C to B corporation. Yvon Chouinard, who founded Patagonia and owns it along with his wife and two children who work at the company, even traveled from his base in Ventura, Calif., to the state’s capital in Sacramento for the legislation signing.

“Yvon Chouinard is getting older and wants to make sure their legacy continues,” said Jill Dumain, director of environmental strategy at Patagonia. “They felt this was the best tool at their disposable to make sure what they want to stay in the company stays there.”

By going through B Lab’s assessment, companies open themselves up to a certification process that some members describe as “invasive,” covering everything from the toilets to recycling bins, paid vacation days and the difference in salaries between the c-suite and rank-and-file workers. If a company manufactures more than five percent of its goods, it takes the manufacturing track of the assessment, answering questions about the environmental and social impact of its factories. For the retail track, a business addresses the social and environmental impact of its suppliers’ factories, as well as that of its retail space. All these steps prove that making a profit isn’t their ultimate goal.

“It’s all about thoughtful commerce,” said Raan Parton, creative director of Apolis, a men’s wear label that received its B Corp certification in March 2012 after a two-year process.

At Apolis’ store in downtown Los Angeles, Parton and his brother, Shea, who serves as chief executive officer, display their B Corp certification badge next to their Council of Fashion Designers of America membership insignia, surrounded by jute bags made by a co-op in Bangladesh and chinos produced in Los Angeles.

“In a way, our generation has information at our fingertips,” said Shea Parton, 30. “This is a smart business decision. You give people information.”

In return, benefit corporations receive tips from B Lab for improving their performance. Dogeared Inc., a Culver City, Calif.-based jewelry brand that became certified as a benefit corporation in August 2011 and changed its legal status to such a year later, implemented a minimum two-week vacation for its 90 employees upon learning that some workers who were paid to craft jewelry by the piece didn’t take days off lest they lost income. It also began offering paternity leave and shifting its sourcing to local companies from New York-based firms. Taking responsibility as a corporation boosted its profile among potential employees and customers. Last year, when it searched for a new social media manager, Dogeared listed its B Corp status in the job description and received close to 1,000 applications for the position. The certification also helps convince customers who are deciding whether they should shell out $700 for an 18-karat gold pendant necklace from Dogeared.

“Having these points of differentiation are enough to sway people to buy Dogeared,” said Dogeared ceo Merlin Clarke.

Joining the B Corp ranks also brings certain advantages. Yael Aflalo, founder and ceo of Reformation, first heard about B Corps two years ago but had to prioritize shipping boxes to support its rapid growth over completing an assessment. The Los Angeles-based fashion brand received its certification in September. With 104 employees in manufacturing, 60 in corporate, 22 staff members in its three retail stores and $30 million in sales, it now can seek tips and advice from other B Corps who are members of the same Google Plus and LinkedIn groups.

“The idea of sustainable fibers is tricky and hard to find sources,” said Kathleen Talbot, Reformation’s sustainability manager. “If you have a tech challenge or if you have another challenge, who else in B Corps can help?”

Not all companies with a social mission fit the B Corp mold. Toms, the footwear company that expanded its one-for-one social entrepreneurship concept to coffee, handbags and, through a Target tie-in, apparel, is neither a B Lab-certified company nor a benefit corporation. A spokeswoman for Los Angeles-based Toms said becoming a B Corp is not part of the company’s current business plan.

Still, government officials are so keen to entice more businesses to jump on the B Corp bandwagon that they’re considering offering incentives for them to do so.