This is part of a comprehensive sustainability and social responsibility strategy, said ceo Nicolas Girotto in his first interview since taking the helm of the company in May.

As part of a comprehensive sustainability and social responsibility strategy, the Swiss luxury brand is launching the Peak Outlook initiative to preserve the mountain environments and their communities, and the first clean-up expedition targets Mount Everest.

“We are cleaning the more extreme mountain areas that are more difficult to access, but that are seeing an increasing number of expeditions and, as a consequence, a proliferation and accumulation of waste,” said Bally’s chief executive officer Nicolas Girotto in his first interview since taking the helm of the company in May. As reported, Girotto was promoted to the role from his previous one as chief operations officer, succeeding Frédéric de Narp, who is now vice chairman of Bally. Girotto underscored that “it was natural” for Bally to support this initiative, given the brand’s history and Swiss heritage. The 2019 season alone saw some 1,200 climbers pass through the storied campground that leads to the world’s highest peak. 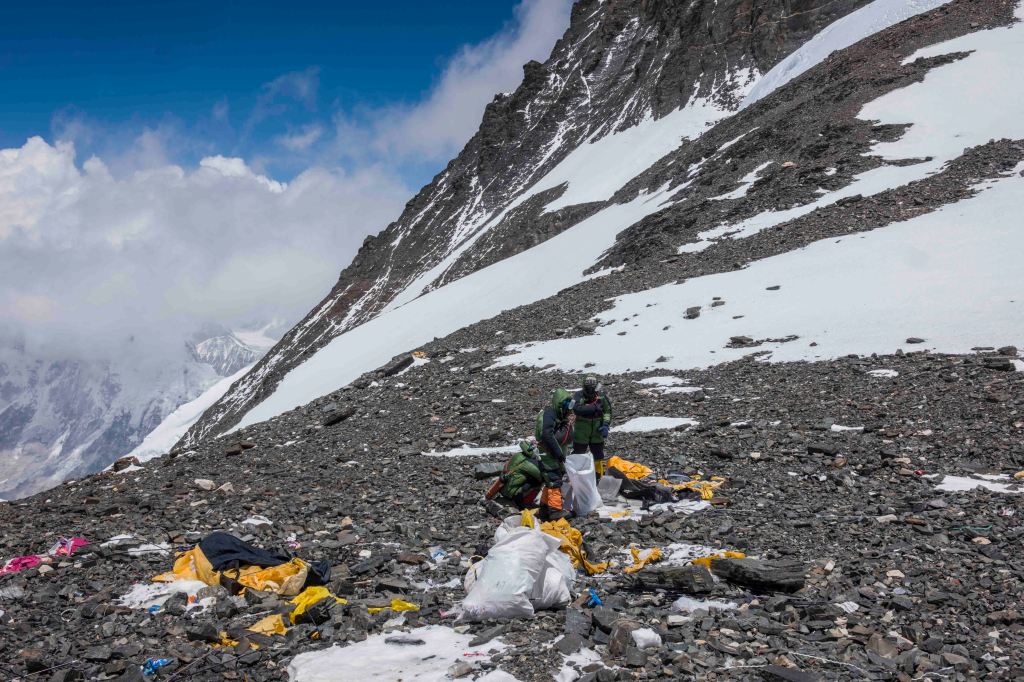 While the company will only start communicating the project today, the Peak Outlook initiative was launched last spring, reaching the summit of Mount Everest on May 21. The mission has removed two tons of waste, of which the first ton was collected during the climbing season, over half within the zone above 8,000 meters, dubbed “Death Zone,” where available oxygen is a quarter of what is needed to sustain the body at sea level. A second ton was collected at the end of the season, after the final expedition teams. This is the first time that a clean-up expedition has been initiated at the end of the season.

Led by Dawa Steven Sherpa and his team, the expedition has helped to restore the landscape between Everest Base Camp at 5,380 meters and its peak at 8,848 meters. Previous clean-ups have been limited to areas between base camp and the mountain’s midpoint at Camp II at 6,400 meters.

Bally’s ties to Mount Everest date back to 1947, when the luxury brand supplied the Swiss Expedition with custom, rubber-soled footwear.

Although Girotto declined to detail the financial amount invested in the project, he underscored this was a long-term commitment and “the biggest in terms of our CSR.” Carl Franz Bally, who founded the company in 1851, was an innovator not only in terms of technology, but also in promoting social responsibility, remarked Girotto. “He was the first to create a pension fund in Switzerland, he had a bridge built to ease the trip to the factory for his employees, he installed a company kindergarten and he wanted to pay corporate income tax. He had a social approach that we as management have a responsibility to continue.”

Girotto is clearly deeply involved, and said Bally asked a consultancy to prepare a roadmap to improve the company’s footprint. “We cannot say we don’t know what the fashion industry does to the environment. Millennials and Gen Z want this commitment and I know that my children would not understand it if their father has not done anything about it,” he said.

Under Girotto’s watch, a flagship will open in Milan on Aug. 27 and it will then be feted with an official celebration in October. Unveiling a concept by CMK, succeeding a previous blueprint by David Chipperfield, the three-level, 6,480-square-foot store will be modeled after a residential apartment and reflect the brand’s shift from aspirational to entry luxury.

Located on the corner of Via Montenapoleone and Via Manzoni, the flagship signals the importance of the Italian market. This flagship — along with a presence in 97 multibrand shops — creates 98 doors in the Italian market. “This is a key moment for us,” said Girotto. There has been an increased emphasis on Milan and the Caslano, Switzerland-based headquarters after De Narp moved Bally from London back to the European continent in 2017. Production is split between Caslano and, for leather goods, in Scandicci, near Florence.

Girotto noted it has become easier to recruit digital-savvy employees and “more interesting profiles” in Milan now, compared to the past when London was the main hub in this sense.

Bally’s online business, which covers 34 countries, is a priority and a redesign of the site with Wednesday will be ready in September. “The focus before was on transactions, but now it’s important to have content, too,” said Girotto. The channel is key in the U.S., where the company has 10 stores in main cities, with two flagships in New York on Madison Avenue and in Los Angeles on Rodeo Drive.

Girotto believes the U.S. is underdeveloped. “We are expanding there because that market is still number one in luxury. We’ve listened to our partners and developed dedicated capsules and exclusive collections, reviewed our price positioning, and we are seeing the results,” he said, pointing to an increased market share with additional doors with the likes of Neiman Marcus and Nordstrom, for example.

Bally adjusted prices globally by 20 perecent across product categories to anchor the brand at the entry-luxury level.

China remains Bally’s most important market, though, said Girotto. To further boost the region, a store opened at Beijing China World last April. “This is one of the most impressive luxury malls,” he said. Bally was a pioneer entering China directly early on, in 1986, and now it has more than 50 directly operated stores in the region. Given this storied presence, the executive cited a study that ranked Bally as the fourth men’s wear label in terms of brand awareness in the country.

In May, Bally also launched on Tmall’s luxury pavilion. “We expected added visibility but it’s also been a commercial success,” enthused Girotto.

Bally’s direct-to-consumer sales represent 65 percent of the total, composed of brick-and-mortar and e-tail.

Although the executive declined to provide sales figures, as reported the company has delivered strong financial performance with a 35 percent operating profit increase in 2018, matched by operational progress, which has seen a visible demographic shift toward a younger, more affluent customer.

Last year, Chinese textile and apparel giant Shandong Ruyi Group said it would take a majority stake in Bally, although discussions are ongoing “with an aim to closing the transaction as soon as possible.” Shandong also controls SMCP and Hong Kong’s Trinity Group, and has said it wants to transform Bally into a global force in fashion and apparel.

The China-U.S. trade war has had a “significant impact on operations, with a fall in the number of transactions and investments outside China, ” said Girotto, explaining that majority shareholder JAB continues to be “totally supportive” of Bally’s strategic plan, its execution and its management. “Bally is fortunate to have had JAB as a majority shareholder for over a decade and they have reiterated their full commitment,” said Girotto.