Lee’s name has been bandied about as a favorite to lead Barneys practically since his exit from Gucci. 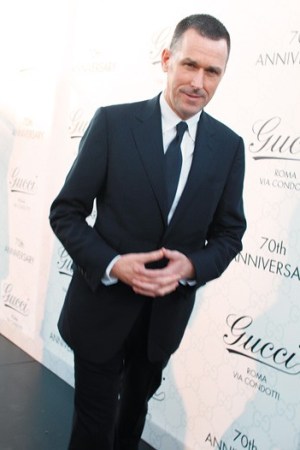 Barneys New York might have a chief executive officer at last.

Mark Lee, who stepped down as Gucci’s president and ceo in December 2008, is in advanced talks to become ceo of Barneys, according to market sources. Lee’s name has been bandied about as a favorite to lead Barneys practically since his exit from Gucci, which came only a few months after Howard Socol stepped down as the store’s chief in July 2008, leaving it without a ceo ever since.

It is understood a contract has yet to be signed, but executive search circles are abuzz that Lee — one of the most admired and sought-after executives in the industry — is the clear front-runner.

Lee was traveling Wednesday and could not be reached for comment. A Barneys spokesman did not respond to a request for comment by press time.

His appointment would certainly electrify the American retail scene — and heighten the competition in New York at a time when Saks Fifth Avenue continues its turnaround and Bergdorf Goodman is undergoing management changes, with president Jim Gold, come October, splitting his time between Dallas and Manhattan when he becomes president of Neiman’s specialty retail division, which includes Neiman Marcus stores as well as Bergdorf’s.

Should he decide to take the Barneys job, Lee would be faced with reenergizing a legendary banner that has seen its momentum slow in recent years. Barneys units that opened in Dallas, Boston, Las Vegas and Phoenix over the past three years have not gained traction, raising doubts about the portability of the brand and its stable of high-end, often esoteric designer labels.

But the recruitment of Lee would be another sure sign that Barneys’ owner, Istithmar World, is solidly behind the struggling asset and eager to improve its fortunes as the U.S. economy rebounds from the recession. The retailer, which reportedly is due to lose up to $60 million this year, has been dogged by rumors for the last two years that it might be sold or forced to close some doors.

The Dubai-based investment firm bought Barneys from Jones Apparel Group Inc. in 2007 for more than $900 million, but Istithmar’s parent company, Dubai World, became engulfed in financial difficulties of its own, rocked by the collapse of the real estate market and debt burdens. Istithmar is understood to have put out feelers about selling Barneys, but could not get the price it wanted and has had to pump in about $30 million over the last year to shore up the company’s balance sheet, which is weighed down by about $500 million in debt. In August 2009, Barneys retained Perella Weinberg Partners to advise on restructuring the debt.

A large portion of the debt is owned by Ron Burkle’s Yucaipa Cos. and Perry Capital, headed by Richard Perry. Both are said to have bought the debt in case Barneys defaulted and they could pick up the asset on the cheap.

In June, Standard & Poor’s Ratings Service took Barneys off CreditWatch but maintained the “CCC” rating of its debt. At the time, the agency said it believed Barneys’ valuation had declined in the last three years.

Barneys has made several runs at Lee ever since he left Gucci, but was always rebuffed. What could have helped this time around is that last January, David Jackson, ceo of Istithmar World, stepped down and was replaced by Andy Watson as interim ceo. Jackson was seen by many as a stumbling block to the recruitment of a high-caliber ceo since he is said to have insisted that he would retain primary control over the retailer and that no major changes could be made to Barneys’ stores or staff. For a while prior to Jackson’s departure, Istithmar even called off a search for a ceo to succeed Socol at Barneys, leaving the retailer to be run by a committee of top executives.

Helming Barneys would cap off a stellar career that took the American-born Lee to the helms of some of the biggest and most prestigious designer companies in Europe. He built his reputation as a strong merchant and leader during his tenure at Gucci, the largest brand in Gucci Group’s portfolio. As president and ceo, he grew the Gucci division’s revenues 46 percent and ramped up its presence in Mainland China. Before joining Gucci, Lee led a radical overhaul of French fashion house Yves Saint Laurent, which is also part of Gucci Group.

Lee was born in San Francisco and started his career in 1984, when he joined Saks as assistant buyer of European designer collections. He held positions at Giorgio Armani and Jil Sander America before joining Gucci in 1996 as worldwide director of ready-to-wear.