CEO Massimo Renon hailed the concept as “unique in the world and setting the benchmark for the future of retail,” with interiors made with new materials created from textile industry scraps.

The new Benetton store in Florence

MILAN — United Colors of Benetton is introducing a new store concept in Florence, which chief executive officer Massimo Renon hailed as “unique in the world and setting the benchmark for the future of retail.”

The flagship marks a new phase for the company, Renon said. “We could have opened it anywhere but choosing Florence has a highly symbolic, almost romantic value, since it’s the city of the Renaissance — one that we see for the brand, too. In addition, Florence has strong links with fashion, from housing the headquarters of Pitti Immagine to those of brands including Gucci and Salvatore Ferragamo.”

Renon was previously CEO at Marcolin, joining Benetton in April last year. Past experiences include executive positions at the eyewear division of Kering Group, Safilo, Ferrari and Luxottica.

Touting Benetton’s potential, Renon said he has also been impressed by the “enormous manufacturing power” and the company’s massive retail network, counting 5,000 stores in the world. That said, since his arrival, he has been streamlining the retail chain, closing some underperforming stores, especially outside Italy. He underscored, however, that the company is planning to further develop business and is not on the retreat, on the contrary mapping out the opening of more directly operated stores. 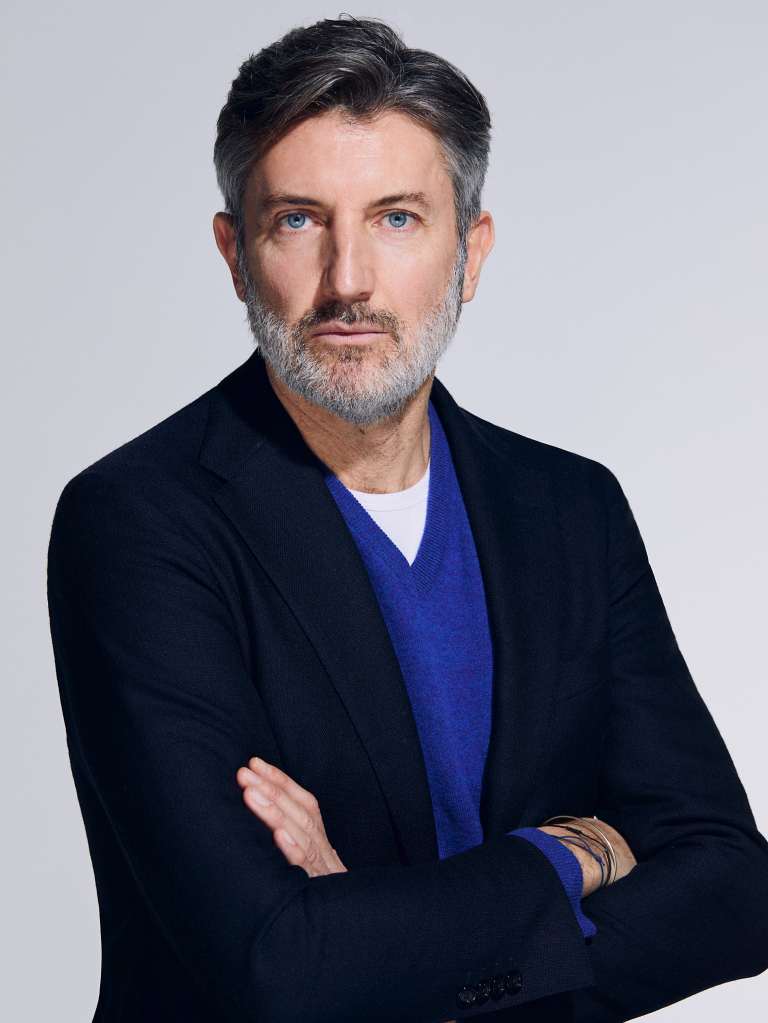 Covering 1,728 square feet over one floor, the Florence boutique, opposite the Santa Maria Novella train station, makes abundant use of upcycled natural materials. The floor is made with gravel from the river Piave in the Veneto region, which houses the Benetton headquarters, as well as waste wood from beech trees knocked down by the destructive Vaia storm that hit the region in 2018. Future store openings will be modeled after this blueprint, Renon said.

The walls are treated with a mineral paint, which have antibacterial and anti-mold properties that can also reduce pollutants in the environment.

The interiors are made with new materials created from textile industry scraps. Platforms and bases of the display stands are made with a compound created from used buttons, which Renon said are generally difficult to dispose of, mixed in hydro-resin. 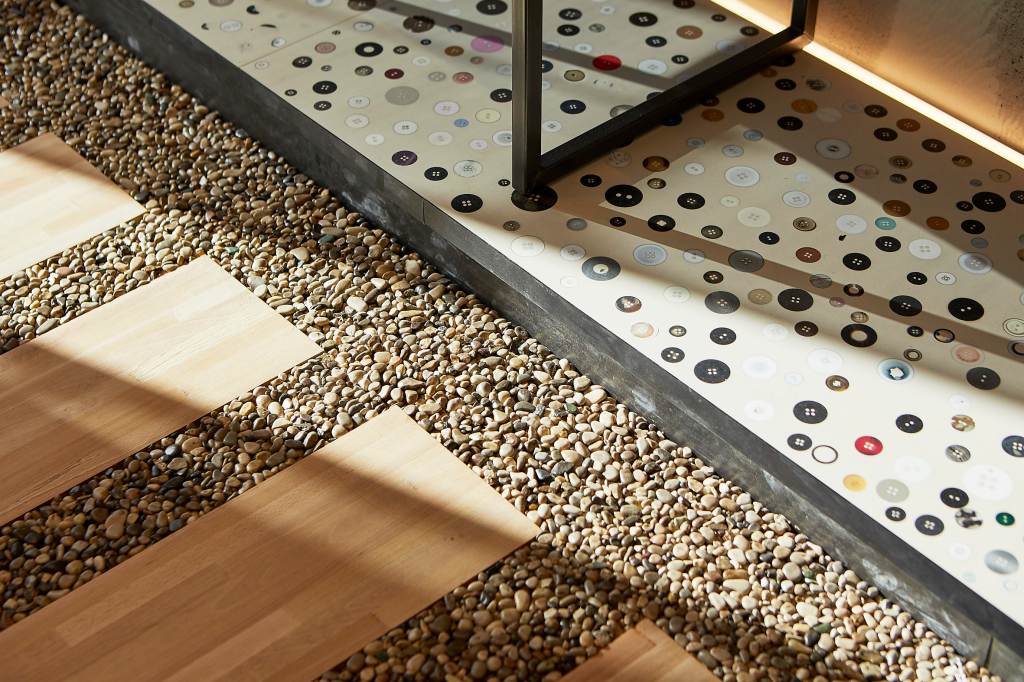 Recycled wool in its raw wick state is reused in the design of the perimeter lining and as decoration for the curtains of the dressing rooms.

Shelves, display bases and mannequins are made in “rossino,” which is a material created from upcycled, mixed textile fibers.

The Florence boutique uses 20 percent less energy than a standard store. A system based on small sensors, artificial intelligence and data analysis maximizes the energy efficiency, automatically adjusting store temperature based on the amount of customers in the store.

Renon also pointed to the sustainability of garments in organic, recycled or Better Cotton Initiative cotton, regenerated nylon, or natural fibers such as linen. 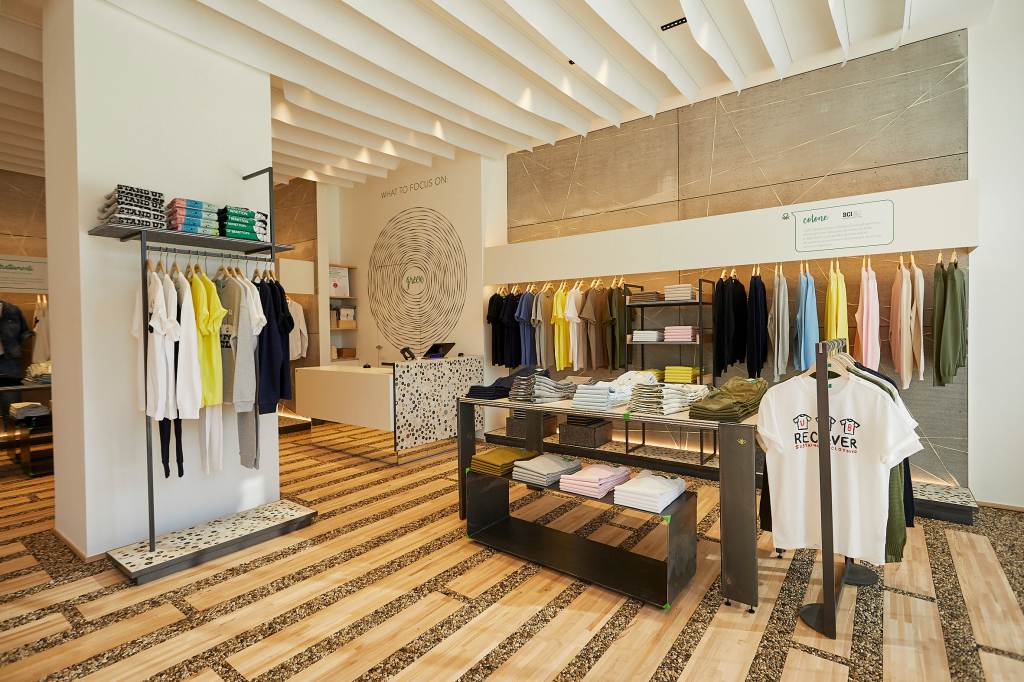 Inside the Benetton store.  courtesy image

Shopping bags are in either washable, easily recyclable organic cotton bags or in paper bags made with materials sourced from Forest Stewardship Council-certified forests.

“Customers really want to know about the clothes, where they come from; they check the labels and their traceability,” Renon said.

Renon trumpeted Benetton’s longstanding efforts in terms of sustainability. “Green, digitalization and product are the pillars we are building our future upon,” he said.

In 2017, Benetton Group was the first European fashion company to join the International Wool Textile Organization and it has also been a member of the BCI, the world’s largest program dedicated to the sustainability of cotton, since that year.

The goal is by 2025 for the collections to contain only 100 percent sustainable cotton. The company procures organic cotton from certified supply chains, and recycled cotton comes from pre-consumption scraps (remains from production) and post-consumption scraps (finished fabrics and pieces at the end of their life cycles).

In 2017, the group obtained the Responsible Down Standard certification and since then it has been part of the Sustainable Apparel Coalition, the largest sustainable production alliance. As a member of the SAC, Benetton Group has adopted the Higg Index, a means of measuring a company’s sustainability performance and involving suppliers in a process of continuous improvement relating to environmental management systems, the use of water and energy, atmospheric emissions and the use of chemicals.

In 2020, for the second year in a row, the brand achieved the highest score among all Italian brands and was placed among the top 10 globally of the Fashion Transparency Index. Among the categories analyzed by the index, traceability is the one in which Benetton excelled with a score of 73 percent, the fourth best result worldwide.

Renon touted Benetton’s “incredible brand awareness,” and he believes that the label reminds customers of “quality, comfort and values.” With the help of Jean-Charles de Castelbajac, who was named artistic director in 2018, the company has been rejuvenating its product offer, with a fashion edge, working to attract a young customer and modernize its image, creating “quality and comfortable products with the right positioning,” Renon said. In fact, with de Castelbajac, Benetton held its first runway show in February 2019 in Milan. The brand skipped Milan Fashion Week this season, but Renon said the designer is preparing a capsule collection to be launched shortly.

The designer was tapped by Luciano Benetton, who returned to helm his family-owned firm in January 2018.

As reported, in December, Benetton launched its new online store and website. The brand’s e-commerce tripled its business in the past 12 months, Renon said.

While the company is mapping out a physical return to the U.S., the region is a strong online business, the executive said. 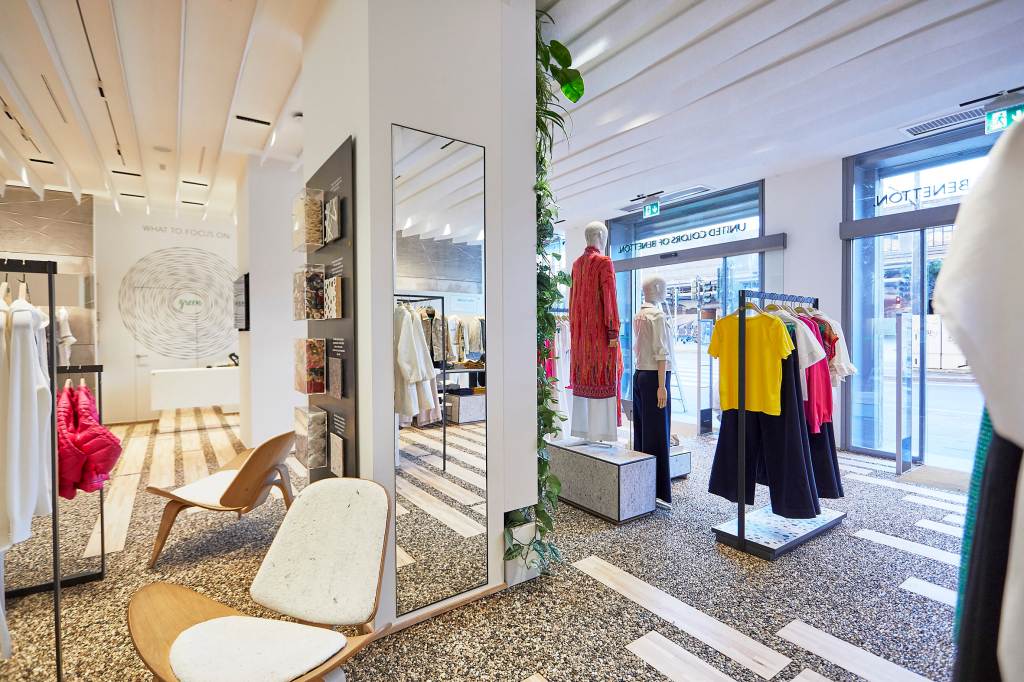 Inside the Benetton store.  courtesy image