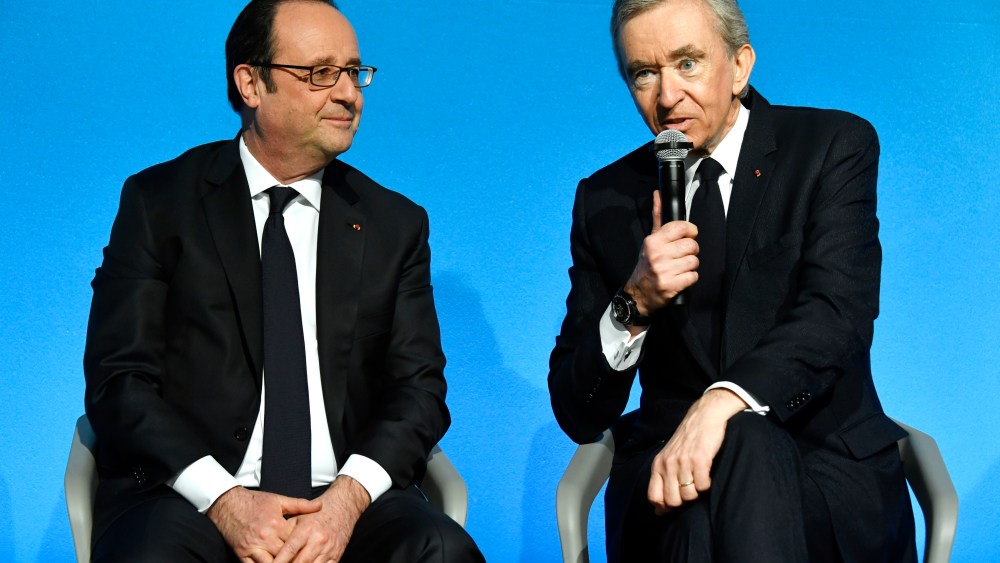 The luxury magnate was joined on Wednesday by French President François Hollande, Paris Mayor Anne Hidalgo and architect Frank Gehry at a press conference unveiling the creation of the venue, to be called La Maison LVMH/Arts–Talents–Patrimoine, near the Fondation Louis Vuitton.

Dedicated to artists, live performances and the applied arts, it will be located in the Bois de Boulogne in the former Musée des Arts et Traditions Populaires, which has been closed since 2005.

Gehry has been charged with renovating the building, originally designed by French architect Jean Dubuisson, a student of Le Corbusier and winner of the Prix de Rome for architecture.

“Paris is about to gain a new cultural hub, and this is good news for the mayor of Paris and for France, because it considerably boosts our country’s attractiveness,” said Hollande.

“This is an extraordinary asset for our city,” echoed Hidalgo. “This building was falling into disrepair and of course, it made no sense to let that happen.” The city of Paris owns the property, but renovations had been delayed due to the complexity and high costs of the endeavor.

The building currently spans 162,000 square feet on eight levels. After its renovation, it will house a concert hall with a capacity of 2,000 to 4,000 people, as well as exhibitions of very large art works; a second room for smaller events or exhibitions; artist workshops; an academy of fine arts and craftsmanship, and a top-floor restaurant with panoramic views of Paris.

Arnault said it would provide a platform for exchanges between artists, craftspeople and the apprentices enrolled in the Institut des Métiers d’Excellence, a vocational training program the group launched in 2014 to guarantee the transmission of skills and promote careers in traditional craftsmanship among young generations.

“The idea is to create a melting pot of creativity and experience with the dual aim of benefiting those apprentices and preserving this artisanal know-how, which is a national treasure and at the root of the success of the LVMH group and its 70 brands,” said Arnault, chairman and chief executive officer of LVMH Moët Hennessy Louis Vuitton.

Declining to disclose the estimated cost of the project, Arnault said construction was scheduled to begin in September and should be completed within two years. Hollande said the state would contribute 10 million euros, or $10.5 million, toward the renovation, including the removal of asbestos.

“I just hope it will take less time than the foundation and that we will run into fewer problems,” Arnault said, noting that the Louis Vuitton Foundation took a decade to complete because of regulatory hurdles and attempts by neighborhood and conservation associations to block its construction.

Since it opened in 2014, the foundation has exceeded forecasts for visitor numbers, with a record 1.2 million people taking in a recent exhibition of 130 major works from the collection of one of the greatest art patrons of the early 2oth century, Sergei Shchukin.

Arnault’s new project comes less than a year after his arch-rival François Pinault revealed he would showcase part of his vast art collection at the Bourse de Commerce in central Paris. The 150,000-square-foot building is scheduled to open at the end of 2018.

Gehry has enlisted Thomas Dubuisson, the grandson of the original architect, to work on the renovation, which will be respectful of the initial design.

“I think the foundation building has its own character, and to use any of the ideas of that on this new building would be denigrating to both buildings, so it’s much better that it stands on its own. It has its own history, its own life, its own future — and it’s a good partner with the foundation,” he said.

“I don’t think it was appropriate to mess with it. It just wouldn’t occur to me to do that,” Gehry added.

The Paris municipal council will examine on March 27 a proposal to grant LVMH a 50-year concession for the building. LVMH will pay the city an annual fee of 150,000 euros, or $158,000, and a variable fee of between 2 percent and 10 percent of revenues.

The project must also be approved by the French Environment Ministry committee on heritage sites. Subject to these approvals, the venue is expected to open in 2020.

Arnault said it was too early to say what sort of concerts and exhibitions the institution will host, though he made a couple of intriguing suggestions.

“I was in Australia 15 days ago looking at a company that we’ve taken a stake in that makes boots crafted out of a single piece of leather,” he revealed. “So perhaps we could invite those craftspeople to France for six months to share their know-how with French craftspeople, because this is a very successful firm in Australia that we are going to try to develop a little bit everywhere.”

Arnault was referring to Adelaide-based heritage outfitter R.M. Williams, in which he owns a stake via L Catterton, the private equity firm formed from the merger of LVMH’s investment arm L Capital and Catterton.

Arnault also suggested the venue could host cutting-edge technologies, such as the connected suitcase that Louis Vuitton is working on. “We are open to everything,” he said.