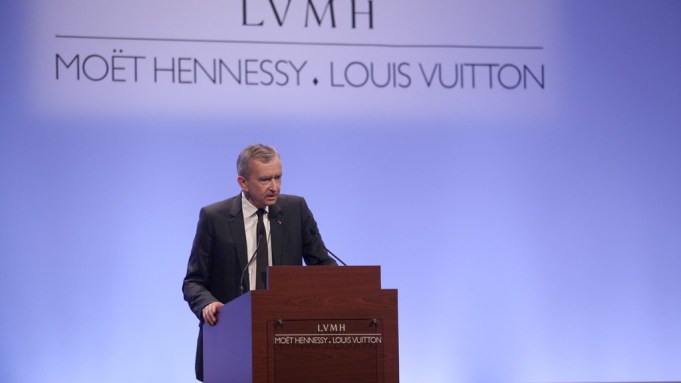 PARIS — Louis Vuitton will accentuate quality, not quantity, to solidify its position in the marketplace, and to ensure future growth.

That’s the word from luxury titan Bernard Arnault, who elaborated on “adjustments” in Vuitton’s “elitist” strategy as he disclosed a 12 percent bump in 2012 net profits at LVMH Moët Hennessy Louis Vuitton — and voiced confidence about the group’s prospects for 2013.

“In some cases, Louis Vuitton has no competitors capable of producing the same quality of leather goods,” Arnault asserted during a results presentation at LVMH headquarters on Thursday. Sounding relaxed and confident, he stressed that it was “vital to heighten the quality lead.”

In a wide-ranging address, Arnault said Vuitton would rein in store openings in 2013 as it did last year, instead focusing efforts on refurbishing and upgrading existing units and providing “superior” customer service.

He said LVMH would continue to resist two quick, but potentially treacherous avenues to accelerate growth: marketing less-expensive, logo-driven products and rolling out stores in secondary cities in China, whose economy is expected to grow at 8 percent this year.

Asked by an analyst to quantify the split between Vuitton’s popular monogram canvas and its leather handbags, Arnault declined to give a breakdown, but said, “Leather is growing significantly faster than the rest, and that’s deliberate.”

Characterizing strong results at LVMH as the natural consequence of quality products and satisfied customers, he alluded to unnamed competitors who continue to roll out stores at a rapid pace. “That’s at their own risk: Short-term it works; longer term it’s questionable.”

LVMH said Vuitton continued its double-digit pace in 2012, and Arnault ensured continuity under the management helm of Michael Burke, who succeeded Jordi Constans at the end of last year after Constans resigned suddenly due to a health condition.

“I’m extremely confident…. I’m absolutely convinced that Michael will be able to drive Vuitton forward into the future,” Arnault said.

“We’re not going to change a strategy that’s successful,” he continued. “We keep the teams that are there and that are successful. They’re motivated and they are passionate about working for this iconic brand.”

Notwithstanding volatile currency fluctuations that will create headwinds for exporters like LVMH, and require price increases in Japan starting Feb. 15, Arnault said his outlook for 2013 is positive, citing a recent “bounce back” in the U.S. and Asia.

He allowed that Europe remains a trouble spot, but “we are selling a lot to visitors so we’re less affected by the economic stagnation than other segments.”

“I believe we can be confident for the overall business climate because the world is growing,” Arnault continued, trumpeting the group’s “exceptional performance” in 2012, headlined by a slight acceleration in sales growth in the fourth quarter, despite a challenging economic context.

In the fourth quarter, sales advanced 12 percent to 8.2 billion euros, or $10.68 billion, versus 7.4 billion euros, or $9.92 billion, in the prior-year period. Dollar figures are converted from euros at average exchange rates for the periods to which they refer.

In organic terms, revenue growth stood at 8 percent, compared with a 6 percent increase in the third quarter. By region, revenues in the fourth quarter gained 12 percent in the United States, excluding Hawaii; 10 percent in Asia; 7 percent in Europe, and 6 percent in Japan.

While LVMH stopped short of giving any sales or earnings guidance for the year ahead, Arnault singled out Fendi, Céline and Berluti among future growth stars.

The latter brand, an elite cobbler being transformed into a luxury men’s lifestyle label by Arnault’s son, Antoine, is expected to generate “several hundred millions of euros” in a few years and, “I believe in three years it will be profitable,” the elder Arnault said.

Investments in Fendi’s expansion, Berluti’s relaunch and Vuitton communications were cited among factors explaining the modest bump in operating profits for fashion and leather goods: 6 percent versus double-digits for all other business divisions.

Pointing to screens overhead showing a scene from Vuitton’s current television, print and cinema campaign in which model Arizona Muse rides in a striped air balloon, Arnault remarked, “It’s less expensive than Brad Pitt.” The allusion to Chanel’s controversial ad for No.5 starring the “Fight Club” and “Moneyball” actor elicited a round of chuckles.

By business division and in organic terms, sales advanced 6 percent for watches and jewelry; 7 percent for fashion and leather goods; 8 percent for perfumes and cosmetics; 11 percent for wines and spirits, and 14 percent for selective retailing, which includes the DFS and Sephora banners.

LVMH’s figures come on the heels of other company results suggesting the Asian locomotive is running out of steam and that the luxury sector won’t be able to keep up its blistering pace. Last week, Compagnie Financière Richemont reported a slowdown in sales growth in its fiscal third quarter, saying sales in the Asia-Pacific region were flat year-over-year on a constant-currency basis.

During Thursday’s presentation, Arnault waved off a question about his controversial quest to seek Belgian citizenship, preferring to tout the luxury goods sector as a principle driver of the French economy, and pointing out that LVMH hired 2,000 workers in France last year as it opened more workshops.

He also trumpeted the group’s entrepreneurial spirit, likening his “command teams” at various brands to “drones, not 747s loaded wall-to-wall with accounts.”