Boden Blazes a Trail in the U.S.

In the 17 years since Johnnie Boden launched his upscale mail-order clothing business, he's managed to change the image of the category in the U.K. from... 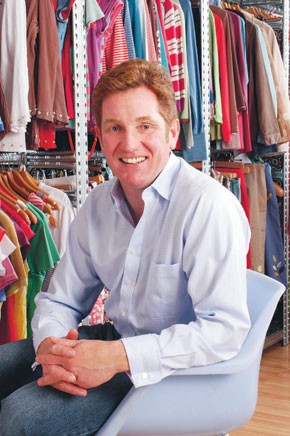 LONDON — In the 17 years since Johnnie Boden launched his upscale mail-order clothing business, he’s managed to change the image of the category in the U.K. from mass market to something distinctly more patrician.

Inspired by L.L. Bean, J. Crew and Lands’ End, which he admired while working as a stockbroker in the U.S. in the late Eighties, Boden launched his eponymous catalogue in 1991. At first he sold a capsule collection of men’s clothing. In 1994 he added a women’s collection.

Now the brand is known for its classics with a twist, good quality fabrics and bold use of color. The spring catalogue features items such as floral print jersey wrap dresses, chunky woolen knits in a rainbow of colors and skirts with large flower appliqués.

Boden’s catalogues are packed with shots of smiling models in chic locales such as London’s Notting Hill, seaside towns on England’s South Coast and haute European resorts such as Capri and Santorini.

The brand has even earned the Eton- and Oxford-educated Boden a mention in last year’s sequel to the Sloane Ranger Handbook, “Cooler, Faster More Expensive: The Return of the Sloane Ranger,” thanks to Johnnie Boden’s posh credentials.

“If you’re in the catalogue business, you are by definition selling a lifestyle of sorts,” Boden said from his spacious office in the company’s West London headquarters. “You want to look at the catalogues and say, ‘Well, I’d like to be her,’ and think, ‘Ooh, that’s the sort of holiday I like having too,’ so there is an element of the dream there.”

Now Boden is promoting his brand in the U.S. Boden has been shipping his wares to the U.S. since 2002, but this month the brand opened a distribution and call center in Pittston, Pa.

“We sent our first catalogues to America in 2002, and we had no idea how successful business was going to be,” Boden said. “We had thought about what to do if it failed, and how much money we’d lose, but we hadn’t worked out what we’d do if it was successful, and we’ve been playing catch-up right from the start.”

Boden said U.S. customers — most of whom are concentrated in California, New York, Texas, Pennsylvania and Illinois — first picked up on the company’s Mini Boden children’s line, which includes floral print dresses for girls and cargo pants for boys. Mini Boden makes up 50 percent of the brand’s U.S. sales.

Boden added that women’s wear has grown considerably in the U.S. since 2002, and the bolder, printed dresses and skirts are particularly popular.

“What I think American customers really want, what I think isn’t done so well there is color, print, embroidery and decorated product…the clothes in America are quite neutral tones, quite plain, so there’s less competition there,” Boden said.

“The Americans, dare I say it, seem to think the Europeans are better at taste, and Boden is an opportunity for them to buy into that at quite a good price.”

However, Boden is eager to underline that he doesn’t see the brand as part of the U.K.’s fast-fashion cycle.

“We’re not in that game of copying runway styles,” he said. “Customers are so well served now, they increasingly want innovation in product — but that doesn’t necessarily mean ripping off the catwalks.”

Boden is considering expanding the brand farther afield. The company has launched its Web site and a women’s catalogue in Germany in August, and he has more territories in mind.

“I think you could argue that we could carry on growing the U.K., the U.S. and Germany, and that would keep us busy,” Boden said. “We’re growing at a rate of 20 percent, so it’s not as if we’re running out of ideas at the moment.”