Sheertex offers a solution for the growing volume of discarded pantyhose ending up in landfills after only one or two wears.

At least a billion pairs of pantyhose end up in a landfill every year — after only one or two wears.

And this fact, coupled with a penchant for problem-solving, led to the creation of pantyhose that are literally too tough to tear. “Why do we have self-driving cars and phones that can pay our bills, but we don’t have pantyhose that can actually get you through the day?” That’s what inspired Katherine Homuth, founder and chief executive officer of Sheertex, to develop and engineer “totally life-proof” pantyhose.

Sheertex, also the name of the firm’s proprietary sheer stretch knit technology, was blended with the world’s strongest ballistic polymer and resulted in virtually unbreakable pantyhose. Launched in 2017 under the name Sheerly Genius, Homuth eventually changed the company name to Sheertex to reflect the name of its technology. Headquartered about two hours north of Toronto in serene Muskoka, Canada, Sheertex’s textile innovation lab is a 6,000 square-foot space that is home to its product development, manufacturing and training facilities. The firm was initially funded via Kickstarter, and closed its campaign with over $200,000 of funding in under a month.

“I really wanted to start with a problem first, and let the technology come second,” Homuth told WWD. “After a few months of pretty intensive research, we became sure that there was a way to do this not just a little bit better, but really fundamentally change the way pantyhose are made today.” Through the blending of Lycra with ballistic and bulletproof fibers that were not traditionally used for everyday apparel, Homuth and her team developed pantyhose that are lightweight, anti-microbial and feature a non-slip waistband. Its polymer technology naturally exhibits white color, but Sheertex’s products are not dyed; the color is instead engineered at the polymer level, and blended with some dyed Lycra materials. The pantyhose are available in black, light, medium and dark tones. 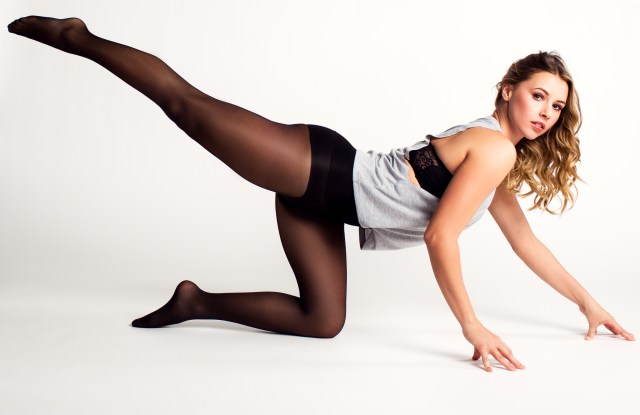 The virtually unbreakable hosiery is a blend of Lycra and ballistic and bulletproof fibers. (Photo courtesy of Sheertex.)

Homuth told WWD, “We make all of our pantyhose from scratch using the world’s strongest polymer, so a polymer that has never been used in pantyhose let alone apparel ever before. It’s a miniaturized version of a fiber that’s been used in ballistic applications, things like climbing equipment, but never made so fine or in colors that you could achieve an apparel knit, let alone a super sheer pantyhose knit.” She continued, “It’s not a fiber that’s never touched the skin before, it’s just a fiber that’s never been made for consumer-level apparel,” adding that “the apparel world had never talked to the ballistic fiber world, essentially.”

Sheer, fine and unbreakable seems like an impossible combination, but the stretchy, ultra-high tenacity fiber is the real deal. And Sheertex is not just a solution for daily apparel; it also serves as a panacea for wedding season woes. The firm recently launched an exclusive, limited-edition Bridal Party collection, which teases, “It’s time to walk — no runs! — down the aisle.” Its bridal collection features fine details, such as back seams, lace, sheer-to-waist design, and “a little something blue in the form of a delicate ‘X’ hidden in the product detail,” the company noted.

“We see Sheertex starting in hosiery, but eventually could see it as a more durable, lighter-weight, essentially fabric, being used in a variety of industries from outerwear — it’s super light, naturally cool to the touch, hydrophobic and super strong — you could even look at footwear, gloves, etc., and really take this polymer that has so much potential to produce higher-quality, longer-lasting products, with pantyhose being a very obviously broken part of the fashion industry.” Homuth added, “You can go through the day with a pair of [our pantyhose], and you go, ‘Oh, I was wearing pantyhose, I didn’t even think about it.’”