It may be the ultimate in aspirational design and marketing: Vera Wang has signed a long-term agreement with David’s Bridal. 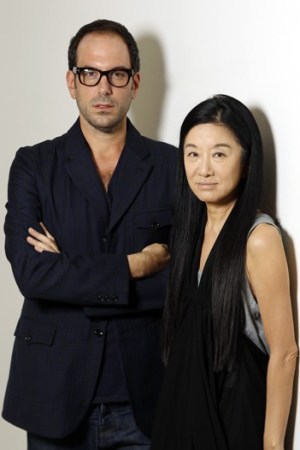 ThredUp Vs. Poshmark Vs. RealReal on Wall Street

“Vera, do you take brides on a budget to swath in chic folds?”

It may be the ultimate in aspirational design and marketing. Vera Wang, high priestess of high-profile, ultratony wedding glamour, has signed a long-term agreement with David’s Bridal, mainstream mecca for the proletarian bride. The pact promises to bring the designer’s renowned bridal aesthetic — and the magical aura that comes with the best kind of celebrity endorsement, the genuine kind — to a mass audience. The name of the collection remains under wraps until its trademark is secured.

Wang, who has dressed countless movie-, music- and social-star brides — Jennifer Lopez, Uma Thurman, Kate Hudson, Ivanka Trump, to name a few — maintains that, while the high end of bridal is lovely, there’s much to be said for an ecumenical scope. “It’s ginormous,” the designer offered of signing with David’s. She and company president Mario Grauso sat for an interview at their headquarters on Thursday afternoon. “There’s a big market out there that we could never take advantage of [before].”

While clearly focused on the bottom line, Wang acknowledged the emotional significance of this deal for consumers. She paraphrased a line from her tome, “Vera Wang on Weddings” (Harper Collins, 2001). “I said, ‘Most of you can never wear a Vera Wang dress.’ My book is me talking through all my years of experience of going to weddings, helping girls with [their own] weddings, being in weddings, all of it. Now I can do the dress for these girls — something we could never do on our own.”

For his part, David’s Bridal president and chief executive officer Robert Huth noted that signing Wang amounts to a major coup. He spoke by phone from company headquarters in Conshohocken, Pa. “Vera is the name in bridal,” he said. David’s had long been interested “in adding a recognizable brand [to] provide a halo effect to the company, one that would not only drive incremental traffic, but would offer our customers a value they’re looking to get from an aspirational brand. When you start looking around at who would fulfill that, there’s no question.”

Spread across all 50 states, David’s 308 mostly mall-based stores currently feature the collections of Oleg Cassini and Galina as well as its own extensive private label. Gowns range from $299 to $1400. Wang’s offerings will run from $600 to $1500, with most under $1200, and will, like all David’s collections, run in sizes zero to 30. (David’s is owned by Leonard Green & Partners, also the owner of Priscilla of Boston, which is sold in its own brand stores across the country.)

The Wang-David’s union was not entered into in haste. “They’d spoken to us over the years, as they have with our competitors,” Wang said. Things turned serious after Grauso returned in September to the company at which he had worked years ago. “I focused on closing the deal,” he said. “Vera came to me when I started and said, ‘This is something that we’ve been considering. What are your thoughts?’” As it turns out, he had plenty, some rooted in his concern over bridal’s overall “diminishing distribution channel in the U.S.”

Wang then interrupted that thought to chime in: “We lost 16 doors between Neiman’s and Saks in one week. I believe it was on a Monday, Saks closed eight doors and on a Friday, Neiman’s.”

The issue, though now acute, has festered for years, according to Grauso. “Vera and I learned together when this company was young that distribution is one of the most difficult things with bridal,” he said. “There’s not that many stores to sell to, and it’s been slowly, slowly eroding. [In the current market] we’re seeing only a nominal number of stores. So I said to Vera, not only am I interested in offering your dresses at a lower price point, but how nice to have distribution.”

By Huth’s accounting, David’s owns 30 percent of the U.S. bridal business. In addition to bridal attire including bridesmaids and accessories, it offers prom and special occasion fare, as well as gifts and stationery. The firm’s Web site boasts more than 40 million unique visitors annually. Although Huth declined to articulate how large the Wang business might become, he is clearly thinking big. “Vera wants to sell a lot of dresses, and that’s what we want to accomplish,” he said. “As she designs we’re going to be on the other side, trying to balance her enthusiasm and her design with the realities of our customer.”

One such reality is the mass bridal customer can barely help but be obsessed with the notion of a Vera Wang dress. “A show like the Kardashians, [Khloe] was talking about having a Vera dress and who wouldn’t want to have a Vera dress,” Huth said. “I mean, how many stars do you have, or [famous] people, who want Vera Wang to design [their] wedding dress? You look at our customer who’s mainstream America, and how many of these woman would say, ‘Geez, I’d do anything to have a Vera Wang gown?’ That’s the whole premise [with] Vera: She is the queen. For us, it’s going to further validate the value of what we give our consumer.

“‘I’d like a Vera Wang dress, but I can’t afford it’ — we hear that frequently,” Huth continued. “We do an awful lot of consumer work and when we were looking at different brand options, hands down, she was the one that they wanted.”

For her part, Wang insists that those women will get more than her name on a label, a statement supported amply by precedent: her far-flung collection for Kohl’s, the design of which traces back clearly to the artful approach she takes to her own ready-to-wear. “I said then, ‘I’m not going to Kohl’s unless I can make good product that I’m proud of, or if it’s not true [to my aesthetic],” she said. “At David’s I think I will be able to bring a taste level. I’ve been doing this for 20 years in September, and whom can I reach? With all the development, with all the draping, trying to push the vocabulary of bridal ahead every single year, what is the point if I can’t share all this work [via] a brand that is reliable and credible to people, if I can’t bring it to another audience?”

Asked whether she’s concerned about the inevitable downgrade in fabrics, Wang took issue with the premise of the question. She maintains that at least when it comes to classic fabrics — crepe de chines, for example — she and other top-tier designers source from the same mills as many designers further down the food chain. “Even for my lower price point of ready-to-wear, I do the basic CDC program,” she said. “We do wash it, and we do things to it….The truth is, we’re all using [certain] fabrics. And by the way, a lot of the [designers] who do those [mass] chains use the same fabrics, only they get them directly from the mills in China. You can’t compete unless you have a big company behind you because, let’s be honest, they’re not going to pay the same for the fabric. The truth here [is that] most of us in America who are upper-end designers use Symphony. [For David’s] I will be using Symphony and other things. I’m sure there are poly versions [of various fabrics] — which a lot of designers on the upper end [of bridal] use, too.”

The collection’s initial range will feature about 20 bridal gowns, which will hit the stores next spring. Beyond that, a number of fine (and some not so fine) points remain to be fleshed out. For example, Wang and Grauso indicated the launch would be across all doors, likely in March, starting with bridal gowns only with bridesmaids to follow. Wang also said she would love to do children’s wedding attire. Huth said he expects to start with “150 doors, give or take,” launching with bridal and bridesmaids, as early as late January: “It’s a matter of how quickly we can get both lines together.” And he’s not anticipating Vera Kids.

All agree that this could develop into something huge that could well change the vocabulary of mainstream bridal across the country. And while none of the three key players would bite when asked if the business is intended to go after J. Crew and the upcoming Urban Outfitters foray into bridal, it certainly sets the stage for “Bride Wars” of the retail sort.

Then of course, there’s the matter of high-low, and whether a customer for one of Wang’s elaborately hand worked lace creations from the luxe end of her signature collection, which could cost upwards of $15,000, might not like that another bride can get her own Vera for three figures.

“Our modern girls are not going to be turned off because we do something less expensive,” Grauso said. “That’s not something people today are embarrassed by.”

Besides, the design will be worthy of the label. Notes Wang, “If I couldn’t raise the bar, I wouldn’t do it.”