The ailing Cath Kidston will shut all of its U.K. stores, with 900 job losses, and become a "digital-led" business, while online fashion retailer Boohoo had a bumper year.

Inside the Boohoo.com U.S. headquarters on Melrose Place.

LONDON — Many wonder what the British high street could look like after the coronavirus lockdown begins to lift. While no one is certain, the fall of Cath Kidston and the rise of the online fast-fashion retailer Boohoo.com could provide a clue — and the outlook is grim.

Earlier this month, Cath Kidston was placed into administration, the U.K. equivalent of Chapter 11, and this week its owners, Baring Private Equity Asia (BPEA), purchased back bits of the business with plans to transform the British clothing, homeware and accessories retailer into an online-only proposition.

As a result, all 60 of its U.K. shops will close, including the vast — and once-buzzy — flagship on Piccadilly, near Fortnum & Mason and The Royal Academy.

Some 900 workers have been let go, and just 32 have been retained to operate the online business. Not all of the Kidston stores were as large as the Piccadilly one; many were small, located in town centers and pulsing with the vintage floral, toy and polka-dot prints for which the brand is known. 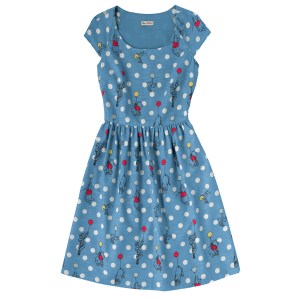 Not too long ago, the retailer, which was founded in 1993, had the most lucrative shop, per square foot, at San Pancras train station in London, the Eurostar’s gateway to the continent. Cath Kidston also had an enormous following in Asia, where its quaint British aesthetic resonated, and where many of the stores also housed cafés offering tea, scones and cakes.

It once counted more than 200 units in 15 countries throughout Asia and the Middle East, with the bulk of its business outside the U.K.

A division of BPEA will continue to operate the brand’s e-commerce platform, franchise and wholesale businesses, and the administrators made clear that Cath Kidston will now be a “brand-first, digital-led business.”

The administrators, Alvarez & Marsal, are now dealing with the disposal of the U.K. store portfolio. The brand is one of many troubled retailers to have fallen into administration following the onset of COVID-19 and the resultant lockdown measures. Laura Ashley, fashion retailers Warehouse and Oasis and the department store Debenhams, which has 142 units in the U.K., are among the others.

On Wednesday, Gordon Brothers purchased Laura Ashley’s brand, archives and related intellectual property from the group’s U.K. administrators. Gordon Brothers said its future strategies could include retaining a “streamlined portfolio of retail stores” in key markets within the U.K. and Ireland. It also intends to place a strong emphasis on building e-commerce, developing more strategic wholesale relationships, and expanding the portfolio of licensees and franchisees globally.

“It’s definitely a challenge to preserve stores under a historical retail model. From our standpoint, we passionately believe that bricks-and-mortar retail has a role to play in building a brand and a business, but it’s not the be-all end-all.”

He said that companies have to be smart about determining their goals for retail, “and having them work together seamlessly with all the other business initiatives, be it wholesale or franchising or licensing. We think a business model that has some of all of that is the healthiest kind of business model.”

Toubassy added that Gordon Brothers is going to be spending “time and energy to try and find ways to find a store model that works for us. Because we definitely think if we can make it work, it will be important for the broader rollout of the brand.”

Debenhams administrators, meanwhile, have vowed to adopt a “light touch” while the stores remain closed and said they are working with the existing management team to trade through “as many stores as possible” again after lockdown is eased. In the meantime, Debenhams’ Irish business has been liquidated with the closure of 11 stores.

Melinda Paraie, Cath Kidston’s chief executive officer, said while the company was pleased that the brand’s future had been secured, “this is obviously an extremely difficult day as we say goodbye to many colleagues. Despite our very best efforts, against the backdrop of COVID-19, we were unable to secure a solvent sale of the business.”

A spokesperson for BPEA said the company was “disappointed” that the COVID-19 crisis resulted in the cessation of the retail store network, and impacted many employees.

While the pandemic has been devastating for many bricks-and-mortar businesses, it’s had the opposite impact on online fashion businesses, which are already ahead of the game, paying far less tax in the U.K. than their physical counterparts.

Indeed, the tax issue is an ongoing one, with bricks-and-mortar chains complaining bitterly about the often onerous business rates they’re having to stump up — especially in London — compared with their digital competitors.

During the lockdown, the British government has eased up on those taxes — temporarily — but the underlying problem that physical retailers face remains.

In contrast to the situation at Cath Kidston, sales growth at Boohoo.com beat consensus estimates on Wednesday, with a 45 percent sales uptick in the second half and a 44 percent rise in year-end revenues to 1.23 billion pounds.

Bernstein pointed out that, as usual, Boohoo will not pay a dividend: Instead, it wants to retain cash for reinvestment in growth — not as a shield for any damage from COVID-19. While Boohoo’s sales took a hit in mid-March due to the coronavirus, they improved in April. Both Zalando and Asos saw a similar pickup in sales this month.

Profit before tax for the year was 92.2 million pounds, and the group has a strong cash position with a net 241 million pounds and no new debt. The distribution network is operational with social distancing in place, the company said.

Boohoo specializes in fast fashion aimed at Gen Z, and also owns the PrettyLittleThing and Nasty Gal online fast-fashion businesses. As reported, in fiscal 2020 it also bought the digital brand MissPap, and the online businesses and intellectual property of British retailers Karen Millen and Coast for 18.2 million pounds.

In line with its model, Boohoo did not buy any of Karen Millen’s or Coast’s high street stores and concessions. In the U.K., those two brands operated 177 concessions and 32 stores.

On Wednesday, Boohoo said it has been able to leverage its flexibility through the COVID-19 crisis, maintain a low cash burn rate and a strong balance sheet. It is also standing by its suppliers, with prompt payments and emergency financial support.

There is no doubt the stark contrast between physical and digital retail will only intensify — at the cost of high streets up and down the country.

According to the Centre for Retail Research, some 20,620 stores in the U.K. will shut this year, 27.1 percent more than last year. The CRR said job losses caused by a combination of store closures and businesses slimming down their workforce should total 235,704, 61.5 percent higher than in 2019.