LONDON — The coronavirus is proving costly for governments and retailers alike: In the U.K., those sectors — and countless others — are struggling to control the financial damage caused by a frozen economy and a downturn in consumption.

On Wednesday, Britain’s Chancellor of the Exchequer Rishi Sunak pledged even more government money to help mitigate the impact of COVID-19 on the economy, promising 750 million pounds to the U.K. charity sector.

The government has also promised to match “pound for pound” a BBC charity appeal that will take place on April 23.

On March 17, Sunak unveiled a 350 billion pound fiscal relief package for businesses, including a pledge to pay 80 percent of workers’ wages if companies promise to keep them on payroll throughout the lockdown.

During a government news briefing on Wednesday, Sunak would not say how many companies were taking advantage of the offer, nor would he confirm media speculation that the furlough salary program would cost up to 40 billion pounds over the next three months.

Sunak called the government’s offer “unprecedented,” and declined to estimate or how large the employment scheme could be.

The 750 million pound charity pledge, Sunak added, is earmarked for local and national, large and small, organizations that are working on the frontline with the National Health Service or “supporting the social fabric” of the country. The U.K. has a total of 170,000 charities, most of which have had to furlough staff.

Sunak was leading the daily government briefing as the country’s death toll reached 7,097. According to medical experts here, the mortality growth curve appears to be flattening, but there will be no changes to current lockdown measures for now.

Sunak also said Prime Minister Boris Johnson remains in intensive care in the hospital, but is “improving” and “sitting up in bed and engaging positively with the clinical team.”

Asked about the progress of the Brexit trade negotiations with the European Union – Johnson has said the U.K. will definitively exit the EU with or without a deal on Dec. 31 – Sunak said that talks are continuing to take place.

“Work is ongoing and we will continue to negotiate through April and May,” he confirmed.

The British government is not alone in trying to chart a way out of the COVID-19 crisis. Almost every company in the U.K., including retailers, is trying to determine how to get through the pandemic – and what shape the economy will in when they do. Retail has been among the hardest-hit industries as most stores in the U.K., as in other countries, remain closed.

On Wednesday, Asos confirmed that it has raised 247 million pounds through a placing on the London Stock Exchange in order to bulk up its cash reserves. It placed 15.8 million new shares at a price of 15.60 pounds a share, or nearly 19 percent of its ordinary share capital. Some 95 percent of those shares were purchased by existing shareholders.

Asos has been leaning on its lenders for credit, and Bernstein said in a report Wednesday that the online fast-fashion retailer will have “sufficient liquidity to weather the storm,” given its expectation of a recovery in Europe in the next months.

Asos has also applied for access to the Bank of England’s financing facility.

Asos’ chief executive officer Nick Beighton said the company had been “significantly impacted by the COVID-19 outbreak,” and is “focused on keeping our business delivering for customers whilst implementing a series of actions to mitigate the sales impact we have been experiencing.” 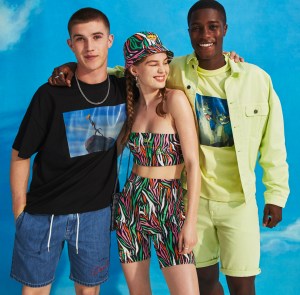 He said the COVID-19 crisis “is clearly going to continue to be tough for everyone and the short-term outlook remains highly uncertain, but the measures we have taken ensure we are able to be clearly focused on making sure that Asos emerges as a stronger and better business.”

The coronavirus crisis is hitting the strong and weak alike. While Asos managed to enrich its balance sheet, Cath Kidston is still looking for help.

As reported last month, the troubled retailer Cath Kidston is currently exploring strategic options, and it has now taken a first step toward filing for administration, or bankruptcy protection. It has filed a Notice of Intention to Appoint Administrators, meaning that the company will go into administration if it cannot find a buyer or investor.

A Cath Kidston spokesperson said Wednesday the notice “forms part of the process by which Cath Kidston is continuing to work with Alvarez & Marsal to explore all options for the company in the current climate.”

The brand has been “actively implementing a new business strategy to support growth while managing the many pressures in the retail sector,” including dealing with the outbreak of COVID-19, “which has been impacting the business globally since the beginning of the year.”

Earlier this week, in a move aimed at keeping creditors at bay, the British department store chain Debenhams also took a first step toward bankruptcy protection.

The retailer stressed that its decision resulted from enforced store closures due to the coronavirus pandemic. It confirmed that it plans to resume trading in earnest once COVID-19 has abated and the U.K. lockdown is lifted.

The retailer filed a similar Notice of Intention, saying the move would protect it from the threat of legal action that “could have the effect of pushing the business into liquidation while its 142 U.K. stores remain closed, in line with the government’s current advice regarding the COVID-19 pandemic.”