BEIJING — Brooks Brothers may have been in China since the early Aughts but a new flagship in the capital is ushering in a new look and feel for the American heritage brand.

The store, which opened on March 24, is located in Beijing’s Oriental Plaza, and is the result of a joint venture with Walton Brown Group, which began in January of last year.

The 10-year deal followed the decision to not renew its license with Dickson Concepts, which had previously sold the brand throughout Hong Kong, Macau and China.

Andy Lew, Brooks Brothers’ president of international and wholesale, said the move will give the firm greater control over the brand, largely through store presentation. The new store is slick, wood-adorned and classic – designed to set the tone of the store upgrades and openings beyond the capital.

“It’s a new, fresh look,” said Lew. “It’s the largest store we’ve opened [in China], it says we’re back, with ownership…we’re bringing in many landlords from all over China to see the concept and what we’re all about.” 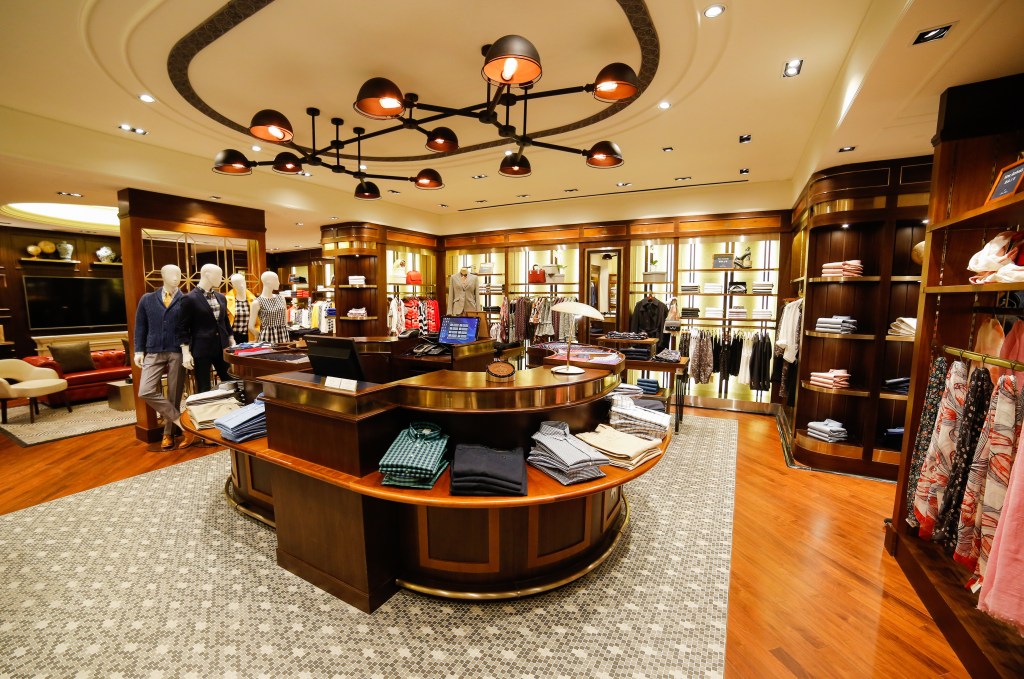 Overall, the company is planning to increase the size of its store network in China from the 110 stores it had in 2015 to between 130 and 140 locations. It is closing some of its stores in the meantime in order to open in more valuable retail spots.

Lew said that “double-digit growth, continually” was the aim. His target is to increase Brooks Brothers’ China sales from around 5.5 percent of the company’s total sales to 20 to 25 percent.

There are nods to Brooks Brothers’ heritage in the form of old-style maps of New York and piled-up leather suitcases. The brand is following a customer habit switch by focusing on malls in China, rather than department stores. Beyond its own directly operated stores, it will continue to work with a small number of franchise partners in China, with 24 franchise points of sale beyond tier-one cities such as Beijing and Shanghai.

Around 30 percent of Brooks Brothers’ U.S. sales are made online, but Lew admitted that its online sales in China represent “not even a percentage” of its total sales in the country. However, a Brooks Brothers online store will open on TMall, China’s enormously popular e-commerce site, in the fourth quarter. A store on WeChat, China’s ubiquitous messaging app, is also in the works.

The company is historically known in the U.S. for men’s wear, but because of its short history in China, this association is not as evident. As such, women’s wear sales have accounted for a bigger overall slice of sales in China than the U.S.: around 24 percent compared with 19-20 percent respectively.

Zac Posen was appointed creative director of the brand’s women’s wear in 2014 and the hope is for his designs to help drive up women’s wear sales. “If we do our job well, utilizing Zac, our goal is to get it up to the 40 to 50 percent mark in China,” said Lew.

Lew said that Brooks Brothers enjoyed a year-on-year sales hike of over 15 percent in 2016 – the partnership’s first full year – and that for the first quarter of 2017 sales were up double digits year-on-year.

Western-style suits are vastly more common than Mao suits on the streets of Beijing these days — but brands such as Brooks Brothers still have work to do to make them even more common.

“The work uniform in China is still developing,” said Lew. “Sure, there wasn’t this historical backdrop, ‘Oh, you have to wear a suit and a shirt and tie,’ but there’s an evolution now, which is kind of fun. We can help create that style of what is appropriate to wear to work, be part of that storytelling.”