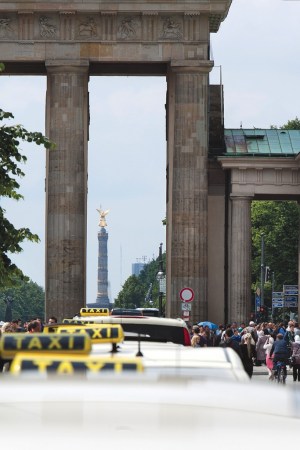 The Other ‘Satan Shoe’ Drops: Lawyers Size Up Nike’s Settlement With MSCHF

FedEx Discusses Learnings After a Year in Peak Shipping

With an estimated 150,000 to 200,000 trade visitors thronging to Bread & Butter, Premium, Capsule, Panorama, The Gallery Berlin, Show & Order and the rest of Berlin’s 10 trade shows and assorted platforms each season, no one can say there aren’t any retailers in the German capital.

Nonetheless, for Germany’s emerging designers and fashion labels — which now make up the core of Mercedes-Benz Fashion Week Berlin’s runway action and interest — buyer attendance in the tent and off-site shows is sparse. Getting a foot into German stores remains designers’ greatest hurdle, and with retail conditions expected to remain challenging in the season ahead, designers as well as fair organizers say that’s not going to change anytime soon.

Bad weather, starting with a warm 2012-13 winter, snow over Easter and now nationwide flooding, has dampened sales and pressured margins, but perhaps even more unsettling are the spectres of steadily growing online sales and declining consumer traffic in stores.

Not that German consumers are pulling back on spending. Nuremberg-based market research firm GfK reported improved income expectations and virtually no change in willingness to buy — both at high levels — for May, and noted Germany’s consumer climate “is continuing on its upward trend.” While the nation’s economy registered only marginal growth in the last quarter of 2012, GfK said “only private consumption provided positive momentum.”

As Olivia Zirkel, owner of Cologne specialty store Simon & Renoldi, summed it up, “Germans have lost their fear of spending. People are eager to spend their money, because they don’t know what to do with it otherwise,” given low interest rates and mistrust in the financial markets.

How and where they’re spending it, however, is harder to predict. All agree consumer habits are changing and that retailers must change along with them, but as the director of the German Apparel Retailer Association, Jürgen Dax, commented, “Nobody can say where it will all lead” — other than to a more nervous retail environment, and German buyers already have a reputation for supreme caution.

“There’s a bottleneck at retail,” said Magdalena Schaffrin, organizer of the Green Showroom and Ethical Fashion trade platforms, both of which continue to grow. “Retail has to move forward, but we don’t know how to convince retailers to change. They aren’t doing that well, and taking risks and picking up new names is even harder in difficult seasons.”

Designers are having more trouble than ever “breaking in,” she said. “But there are consumers for these labels, especially in green fashion,” she asserted. Many are considering direct distribution, opening their own online or studio shops, she noted, but added that investment capital is extremely hard to come by.

“It’s really not been a good season for retailers, nor was the previous one,” said  Mirjam Dietz, international brand development and communications director for the Igedo Co., which organizes The Gallery Berlin. “But if retailers don’t wake up and put aside 15 percent of their budget for risk — that is, new collections — they won’t be able to differentiate themselves from the rest of the market. And that’s crucial. We need to encourage them to look for something new.”

Berlin, she continued, “offers an opportunity to make discoveries in a great surrounding. MBFWB is a designer showcase and retailers should save time for it, but all the commercial trade fairs take their time away.”

Some of the exhibitors at The Gallery will also stage independent runway shows at the expansive new Opernwerkstätten venue.

There are 52 designer shows and presentations on the official MBFWB lineup, as well as 30 to 40 more under the auspices of Showfloor, Lavera, The Gallery and other platforms. In keeping with most of the trade shows in town, the Berlin runway focus is now clearly on contemporary labels and the younger generation of design talent.

Indeed, some of Germany’s larger and more established fashion players, like Hugo Boss and Rena Lange, are passing on Berlin for spring, and Escada already pulled out last January, saying shows in emerging markets took precedence. Boss is now eyeing a New York fall runway debut under its new artistic director, Jason Wu, while Lange said it’s just sitting out this season in light of the house’s reorientation under new owners and new designer Annick Gorman.

When MBFWB kicked off in July 2007, experts suggested its main role would be as a photo op, and as the Web’s influence has spread, the event’s runway photos have proved to be an effective communications tool for designers. As Jarrad Clark, global director of productions, IMG Fashion Events and Properties, pointed out, the show visuals provide Web and social media content that have a lifespan long after the show.

“It’s a way to communicate to buyers who may not have been in the tent and to create new introductions,” he said, adding that when he travels, “Everyone talks about Berlin and there’s a real desire to know what’s happening. So while they may not always be attending [the shows], they’re always watching.”

At least that’s what Thomas Bentz, managing director of Achtland, is banking on. After three seasons of doing a private showroom in Hotel de Rome, the Berlin-based label, which won the German luxury association Meisterkreis’ “Zukunftsmeister,” or Future Master,  award, is staging its first runway show in Berlin in July. “We think it’s important to show the clothes in a less static way,” Bentz said, “and to get the pictures up. Runway pictures fare better in the online world.

We know retailers are watching us,” he continued. “We also know it’s stressful for buyers to fit us into their calendars with pre-collections and men’s going on at the same time. But more relevant is that they [retailers] lack a certain confidence in pushing young German designers. They want to see international success, some sort of seal of approval first. We’ve been told it won’t work to hang us next to Céline or Givenchy at this stage. Consumers are too conservative. But at the same time we get e-mails from consumers asking why we don’t sell in Cologne or Frankfurt.”

How to get around it? “We need to develop the collection in a way that attracts international buyers and press. Berlin is a fantastic platform to launch a German brand, and there’s a lot of curiosity and support from the German press. But it’s not quite there yet as an international platform,” Bentz said. Achtland was one of 23 local collections to participate in the Berlin Senate-funded Berlin Showroom in Paris last January, and will return to the City of Light with the spring collection. “Even German buyers come to Paris to buy, as opposed to Berlin.”

“There are wonderful young German designers,” said Klaus Ritzenhöfer, founder and co-owner of Cologne’s designer-studded concept store Apropos, which will open a fifth door in Hamburg in August. The store has featured designers like Dawid Tomaszewski and Kilian Kerner in its Düsseldorf store windows during market week to help give them more domestic exposure.

“I admire the consistency of their vision and their passion, but those who’ve had more success, like Lala Berlin or Kilian Kerner, have learned to be somewhat more commercial. In the high end, it’s really difficult [to feature unknown designers] in a time when retailers have access to all the big names and the huge marketing apparatus behind them. We do have very informed customers who are prepared to experiment, but that’s about 5 percent. The rest need the security of buying a well known label.”

His advice: Take Italy’s MSGM as a model, and start in the midprice range and then work upward, not vice versa.

Leyla Piedayesh, who founded Lala Berlin in 2004, sells her knit-centric collection to some 60 to 80 doors in Germany, plus retail customers in Austria, Switzerland and now Denmark. She also has a Lala store in Berlin, which opened in 2006, and the label’s online shop. The line has sales agents in Milan, Paris and Copenhagen and a new showroom in Benelux. These are commercial milestones that labels with a shorter history in business are still struggling to achieve.

Her background might have helped, she noted, having taken an international business versus a fashion degree. And while she admonishes many German designer collections for being “far too high-priced or doing things, even if beautiful, that nobody needs to have,” she also suggested “fashion is not taken seriously in Germany” by investors or banks.

Premium cofounder and director Anita Tillmann’s strategy proposal for young designers is “to approach online stores first or create your own online community. You have to be proactive, and to be an entrepreneur on an everyday basis.”

“I’m a retailer, too,” she added. “It’s not enough to just send a catalogue. You have to make a real effort, keep calling and calling, and then maybe we’ll help you. If you want to be special, then act special. Every single day.”

IMG, organizer of Mercedes-Benz Fashion Week Berlin, is also stepping up its efforts to help young designers face their obstacles. The Stage, which can accommodate audiences of between 150 and 270, will replace The Studio in the main tent venue. Besides housing static presentations, designers who don’t yet have the financial means for a full-fledged show can take advantage of a shorter Stage runway, IMG’s Clark explained.

IMG recently held its first designer workshop in Berlin, which is “a new part of our global strategy to work with designers 12 months a year,” he reported. “And not only regarding the local market, but to help them get traction internationally. We have offices in six countries, we can introduce them to other trade fairs and events, help them evaluate, for example, if they have the right p.r. to enter a new market.”

At the same time, he pointed out, designers don’t necessarily have to leave their homelands to broaden their reach. “They can spread their wings with e-commerce without leaving their own backyards. Or, if they open a new shop, they can reach a half a million followers via our social network.”