Burberry Sales Rise 7 Percent in Half 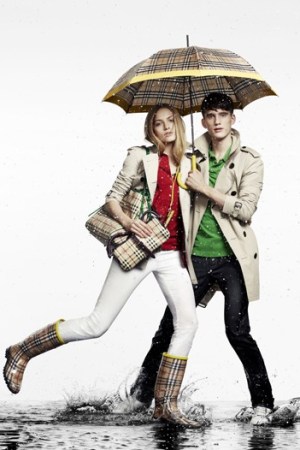 LONDON — Burberry has taken a decidedly British institution — the rainy weather — and turned it into a commercial opportunity. The brand, which on Tuesday reported a 7 percent increase in second-half sales to 707 million pounds, or $1.1 billion, will today unveil a new capsule collection called April Showers.

This story first appeared in the April 21, 2010 issue of WWD. Subscribe Today.

The 30-piece line is aimed at keeping customers shopping until the first fall deliveries drop in June. The items include clothing and accessories built around Burberry’s iconic products. Umbrellas, wallets, iPod holders and rubber boots with the classic Burberry check have been given shots of green, yellow, blue, or red borders and details.

“The idea was conceived in January for delivery now. It’s a way for us to react and be dynamic about the way we sell, and to ensure that sales don’t stall in April or May,” said Stacey Cartwright, Burberry’s chief financial officer.

She added the collection would be distributed worldwide in Burberry stores, and was just one part of the firm’s rallying call to staff to “get out there and gain market share.” She said the company had not yet decided to do a similar capsule collection for fall.

All dollar figures have been calculated at average exchange rates for the respective periods under review.

Cartwright said bestsellers in the period included all types of outerwear, as well as nonapparel including shoes, scarves and small leather goods. She added that a further engine for sales in the period was Burberry’s digital drive, including the recent broadcast of the fall show worldwide in 3-D.

“We believe our digital initiatives are driving awareness, and traffic into our stores and helping us outperform our peers,” she said.

The decline was due to a 20 percent fall in wholesale revenue during the period, caused partly by the closure of specialty store accounts in Europe and the weakness in the Spanish market, where Burberry plans to withdraw the local collections it had traditionally sold and to introduce its global collection.

Angela Ahrendts, Burberry’s chief executive officer, said in Tuesday’s statement the sales figures showed “a stronger finish to the year than we had anticipated in both retail and wholesale.” She added she expects the company to deliver pretax profits “slightly above current market consensus,” when Burberry reports its full-year results May 26.

Analysts were upbeat about the results: Deutsche Bank said Burberry beat its fourth-quarter forecast by 4 percent, while HSBC said first-half sales beat its estimate by 1 percent. Shore Capital called the fourth-quarter performance “excellent,” while Dennis Weber of Evolution Securities said the revenue performance at the end of the year was of “high quality.”

The outlook is bright: Burberry said wholesale revenue, including the negative impact of Spain, is set to rise 10 percent in the six months to Sept. 30. The brand is set to increase retail space by about 10 percent, weighted toward the second half. Between 20 and 30 mainline store openings are planned, mostly in the Americas and Asia-Pacific region.