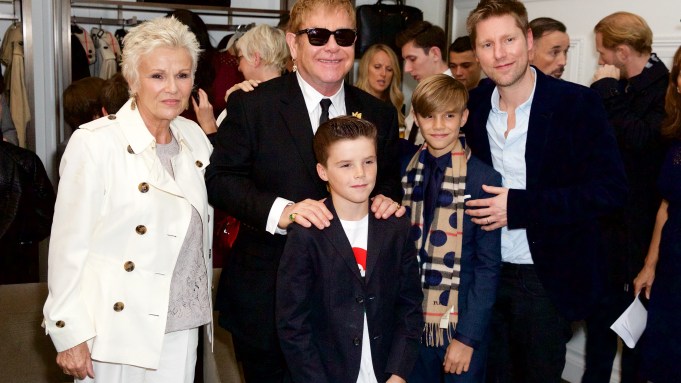 LONDON — Burberry is consolidating and updating.

In a major strategic shift under chief executive officer and chief creative officer Christopher Bailey, the British brand will merge its Prorsum, London and Brit collections under a new, single Burberry label. The move means the end of the strategy begun under former ceo Rose Marie Bravo and continued by her successor, Angela Ahrendts.

No jobs will be lost in the process of melding the three labels, which is due to be completed by the end of next year. Items with the single, new Burberry label will begin landing in stores in the summer.

Bailey revealed the change at a press conference Tuesday before the unveiling of the company’s holiday ad campaign, which riffs on the classic British film “Billy Elliot.” The Burberry ad features a string of celebrities trampolining to music by T-Rex. The campaign, unveiled to a crowd of 700 during a cocktail at the brand’s Regent Street flagship, marks the 15th anniversary of “Billy Elliot.”

As for why it is merging its three labels into one, the company said the change acknowledges the way in which luxury customers like to experience the brand online and off-line.

Bailey said by unifying the three lines under one label, Burberry can also offer “a much more consistent experience of the collections. Those categories were created when Burberry sales were 70 percent wholesale and 30 percent retail. Now it’s the opposite, with retail sales that are bigger. The key is to present a cohesive brand experience.”

He said the change would drive productivity and create a simple, more intuitive experience for the customer.

In September, following the spring ready-to-wear show, Bailey told WWD that he took the liberty of mixing up clothes on the catwalk, with pieces that cut across different seasons and various Burberry collections. He said social media now gives everyone “an instant global view,” and that people no longer care about boundaries or seasons in a world that is half-hot and half-cold all year-round.

“It’s about blending,” said the designer, adding that he even mixed pieces from Burberry Brit, the house’s contemporary collection, into the show.

In addition to the launch of the consolidated label, Bailey said the company plans to build a state-of-the-art factory in Leeds, England. The initial investment in the factory will be 50 million pounds, or $77.2 million at current exchange. The brand has already found the land, and plans to open the new factory by 2018, with construction work set to start next year.

“It will be a major new weaving and manufacturing facility for our most iconic product — the trench,” he said. “We’re calling it Project Artisan and it reflects our massively important heritage of weaving and producing the trench in England.”

The project will also mark the company’s upcoming 160th anniversary.

Bailey said the two factories in Yorkshire that make the heritage trenches have reached maximum capacity, and are today producing double the number of coats compared with five years ago.

He said the company planned to transfer existing staff in the two Yorkshire factories to the new facility, which will weave the fabric and make the coats. Burberry will also bulk up its apprenticeship program and add some 200 jobs. The new facility isn’t far from the two older Yorkshire factories, and within striking distance of a new, high-speed train line that’s being built.

Bailey said the factory would allow Burberry to double the capacity of its trench production, expand other outerwear categories and undertake more sustainable production.

George Osborne, Britain’s Chancellor of the Exchequer, or chief finance minister, said Burberry’s decision “to base the new center in the heart of Yorkshire, creating hundreds of new jobs in the region, is a massive vote of confidence in our plans to build a northern powerhouse.”

The trench has consistently been a top performer – even in the brand’s troubled second quarter that saw a surprise contraction in same-store sales. During the three months, from July to September, heritage trenchcoats, ponchos, scarves and the Banner handbag bucked the downward trend, and it’s clear that Burberry is further feeding a cash cow.

Holiday is a key season for Burberry and it’s pushing out themed merchandise with gusto. “It’s our most important trading season,” said Bailey, who created the three-minute film, which is accompanied by print ads shot by Mario Testino.

“Christopher is a great friend of mine and it is such a lot of fun helping to celebrate such a special film alongside a brilliant bunch of Brits,” said John.

Campbell added: “When we got there, we saw all these trampolines and had an amazing choreographer teaching us how to do it and it went so smoothly.”

Rosie Huntington-Whiteley, who bounces in the holiday film in a belted trench, said before the screening that she drew the line at wearing heels during filming. “They asked me to put heels on, and I said, ‘You are out of your mind.'” They all compromised on an altered over-the-knee boot that allowed the model to vault as she pleased without the threat of breaking her ankles.

She admitted that it was her first shoot with her little brother Toby, and that during filming she “stood up in the eaves, watching him bounce, a proud sister from afar. The set was so big, a mega-mega set as big as any movie set.”

Asked why she accepted the encore for Burberry, the model, one of Britain’s best-known and in-demand, said: “They put me on the map. They shot me first on my 21st birthday, and have been very loyal to me since then. It was the ultimate job when I started modeling. If you were a Burberry girl, you’d made it.”