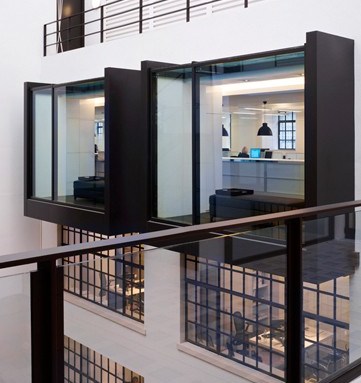 LONDON — Burberry has a new home for the first time in more than 100 years, a high-tech tower of oak and marble just a few steps from the Thames River and from MI5 — Britain’s version of the FBI.

Horseferry House, a 160,000-square-foot former government building with views of Big Ben and the river, houses 850 employees and is meant to offer the ultimate Burberry experience.

“We wanted our staff to have the same brand experience as our customers when they walk into our stores,” said Burberry chief executive officer Angela Ahrendts from her top-floor corner office, which includes energy-efficient lighting and views of the Houses of Parliament.

Indeed, the sleek, streamlined interior of the new headquarters — built in the 1930s and gutted and redesigned by London’s Gensler architects — is similar to those of the brand’s newly refurbished stores in Knightsbridge and Beverly Hills.

“What we’ve done, you see, is move our employees into a big Burberry store,” Ahrendts said.

The new space unites Burberry’s five former Haymarket offices (near Piccadilly) under one roof, and means staff members no longer have to cross busy London streets for daily meetings.

Designed by creative director Christopher Bailey, the new building boasts a light-filled central atrium that connects seven floors of open-plan offices. The showrooms and a full photography studio are on the lower floors.

The color palette is soothing and neutral: a mix of Corinthian gray marble and dark oak floors, polished black chrome fixtures, and chocolate brown, bespoke midcentury modern-style furniture. “This office became a bit of a labor of love for me, and I’m very proud of it,” said Bailey. “Horseferry House is so much more than a building: It’s very symbolic of the company — we have so much momentum and energy bubbling over right now.”

The building also features technology aimed at saving Burberry time and money. Although the company has not disclosed the total investment in the new offices, a spokesman said the move was earnings neutral.

In 2007, Burberry sold its Haymarket headquarters for 15.1 million pounds — $31 million at the time, or $22 million at current exchange. It is renting the current site.

There are LED screens in common areas for beaming runway shows or Webcasts to staff, Halide lighting that switches off if rooms are unoccupied, and video conferencing facilities so clear that staffers can make out the weave of a fabric.

Ahrendts said the video conferencing — which Verizon provides for free — will contribute to a 25 to 30 percent reduction in company travel expenses. She said that, overall, costs at the new headquarters are 40 percent less per square foot than Haymarket.

Next up for Burberry is an encore performance, in Manhattan at 444 Madison Avenue. Burberry’s new headquarters there will span 68,348 square feet over four floors. The building, a 42-story tower built in the 1930s, also has a rooftop sign that will read “Burberry” in bright lights when the company moves in early April.