What to Watch: Buy, Buy Britain: Pre-Brexit Pound Could Be a Boon for Buyers

Uncertainty ahead of the Brexit deadline of Oct. 31 is putting pressure on the pound and fueling exports.

LONDON — Halloween, an American export, isn’t a big deal in the U.K. It’s a marketing and Instagram opportunity, a chance for retailers up and down the high street to peddle chocolate and plastic daubed in orange and black.

This year, Halloween will be unforgettable here, with or without mini Snickers bars, because Oct. 31 is the day Britain is set to leave the European Union, whether or not it has managed to strike a new, viable exit deal with the EU.

The new Conservative prime minister, Boris Johnson, who replaced Theresa May in July, has promised Brexit “do or die.”

While he’d like to renegotiate May’s unpopular deal with the EU, he is unafraid of a “hard” and potentially chaotic Brexit, leaving the bloc with no agreement on Oct. 31. It could be disastrous for the economy and for the pound in the short to medium-term.

Members of parliament who want a deal — or who want to remain in the EU — are prepared to fight him on the no-deal front, so this autumn in Britain is going to be a hot one.

Parliamentarians return from their summer break on Sept. 3, and there’s a good chance they’ll call a vote of no confidence in Johnson’s government, and try to bring it down.

If they succeed, there could be another general election, but it will be up to Johnson to decide the date and — guess what? — he’ll make sure it’s after Oct. 31, after Brexit, hard or soft, has already happened.

There is also a chance the October Brexit deadline could be postponed once again, or that the U.K. revokes its decision to leave, although those two scenarios are unlikely given Johnson’s and the Brexiteers’ determination to leave. 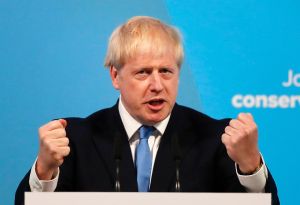 Boris Johnson speaks after being announced as the new leader of the Conservative Party in London.  Frank Augstein/AP/Shutterstock

The Conservative Party, which now has a whisper-thin majority in parliament, believes Johnson will be the person who makes Brexit happen once and for all, following May’s fruitless months of tug-of-war with the European Union and a series of inconclusive votes in Parliament.

Conservative Party members also backed Johnson as May’s replacement because they believe he’s the only candidate who could win a future general election and knock out the left-leaning Labour Party leader Jeremy Corbyn.

Although Johnson may have the backing of fellow Tory party members, come September he’ll be presiding over a divided, squabbling Parliament. Over the summer, MPs from Labour, the Liberal Democrats and even the Conservatives were cooking up plots to oust him and block a no-deal Brexit.

None of this will be easy as Johnson has popular appeal. And, let it not be forgotten, a majority of the British public voted for Brexit in the summer of 2016. There are a lot of Britons out there who are angry that the country hasn’t left the EU yet.

“The people of this country are trusting in us to get Brexit done in a new spirit of can-do, and believing in ourselves,” Johnson told fellow Conservative party members during his upbeat acceptance speech in July at the Queen Elizabeth II conference center in London.

He said the mantra of his early summer leadership campaign would never be forgotten: “Deliver Brexit, unite the country, defeat Jeremy Corbyn. That is what we’re going to do. With energy. We are going to energize the country.”

While the run-up to the Oct. 31 deadline will likely be the most stressful few weeks the U.K. has witnessed in decades, there will be an upside for bargain hunters. The pound is already low — and is likely to fall further.

Between May and early August, the British pound fell 6 percent against a basket of currencies, while some economists foresee it falling as low as $1.05 if the U.K. “crashes out” of the EU without a deal. Before the Brexit referendum in 2016, the pound was trading at $1.50.

For retailers, this is an opportunity to buy more British fashion, which will now be cheaper.

Many small fashion businesses have already put measures in place to protect themselves against a chaotic no-deal exit, transferring manufacturing and picking and packing operations to Continental Europe in a bid to avoid future World Trade Organization tariffs on imports and exports, post-Brexit.

Some brands have also switched their accounting from pounds to euros, and remain hopeful the U.K. will be able to strike deals — quickly — with the likes of the U.S., Japan, Canada, Australia, New Zealand and Mexico once Britain leaves the old EU trading bloc.

With contingency plans already in place, many fashion businesses have grown tired of talking about, and preparing for, Brexit. They want to move on.

“I’m not worried. We’ll all muddle through,” said one designer who prefers to focus on her already thriving business rather than dwell on the consequences of a hard Brexit.