CAA Fashion is headed by Christian Carino, a self-styled kinder, gentler agent, who is looking to elevate models to the realm of Hollywood talent in pay and personal brand-building and create more opportunity for them in the entertainment space.

He is offering a more generous commission structure based on the 10 percent Hollywood standard rather than the 20 to 40 percent model industry standard and proactive business development outside of fashion.

“We are making a commitment to represent these people the same as we represent musicians and actors, by building a team not just to service their business in fashion, but to service and monetize their passions and full potential…the same way we operate for Katy Perry,” said Carino, who forged a strategic partnership with fashion pr firm KCD in August.

He’s also wrapping in a message of diversity and self-empowerment for these activist times.

“We started with the idea that we could leverage our influence as an agency to make things better for women in the fashion business who have been historically underrepresented and undervalued. But we realized we also had an opportunity to celebrate all races, genders, LGBTQ and even those with disabilities….This isn’t a celebration of inclusion for the sake of, it’s with an eye on making everyone the powerful business people they deserve to be,” Carino said.

Indeed, modeling’s reckoning with abuse and exploitation is far from over, as evidenced by sex-trafficker Jeffrey Epstein’s shady dealings with his MC2 agency, and recent news out of France that Gérald Marie, former European chief of Elite Model Management and now head of the Oui agency, may face investigation over charges he raped and sexually assaulted three models decades ago.

Carino is urging his clients to be spokespeople for change.

“I’ve been looking for an agent who is willing to embrace the future, learn from the mistakes of the past and be the perfect blend of business and fashion. Christian understands the institutional problems within the modeling system, and he and CAA are on a mission to use the collective influence of our voices to change the industry,” Schiffer told WWD in an e-mail. “I want to be not only a voice in this movement, but a mentor for the next generation.”

Now that traditional retail and media revenue streams are shrinking, creating opportunities outside of fashion is also key to the CAA Fashion strategy, ironically.

“The traditional modeling agencies are largely paralyzed because that’s not what they do, and if traditional transactions stop, there is no backup for them or for their clients. Now more than ever, our clients see the need to not be totally reliant on the industry to support them. Every one of them should have a business that’s their own,” Carino said.

“I wanted somewhere to create and go into different ventures,” said Harlow, adding that CAA sought her out. Since signing, she has started development on her own skin-care brand.

If some of what CAA Fashion is doing sounds familiar, it’s because rival Hollywood agency WME-IMG has been doing it since 2013, working across IMG Models, The Wall Group and Art + Commerce styling agencies, the Lens photography agency, and its fashion week events. WME-IMG operates offices around the world, and represents several of the highest-paid models, including Gigi and Bella Hadid, Karlie Kloss and Hailey Bieber along with up-and-comers such as Maty Fall Diba. It has also engaged in brand-building, helping to launch Lily Aldridge’s Parfums, Millie Bobby Brown’s makeup line and Selena Gomez’s Rare Beauty.

When William Morris Endeavor acquired IMG Worldwide in 2013 for $2.2 billion, it promised synergy between the entertainment and fashion divisions. But some clients have complained the two compete more than collaborate, and that it can mean losing out on money and opportunities.

The coronavirus has created more uncertainty for the entertainment, sports and fashion firm, which is carrying so much debt from its acquisitions, reportedly $5 billion from IMG, Ultimate Fighting Championship, Frieze Art Fair and others, that some industry watchers are anticipating it may have to begin spinning off assets to stave off Chapter 11 bankruptcy. In May, the company secured an additional $260 million loan.

Comparatively, CAA Fashion is a start-up in the space, albeit one that is working within the agency rather than from a separate company, and without being saddled with a live events business. Carino has assembled a team of 14 agents and executives, including former IMG model agent Josh Otten, who rose through the ranks from assistant. CAA has signed several names away from WME-IMG, including Hosk.

“Josh completely transformed what my experience in the fashion industry was. Working with him, I began incredible relationships with fashion houses. But when Josh left that experience changed,” said model-actor Indya Moore, who is Black and trans. “There were several times I had conflicts in the industry, where I was disrespected, and I didn’t feel represented or protected or believed. I felt like people were placing relationships with corporations over the relationship they had with me, and they weren’t taking my identity in consideration,” explained the “Pose” star, who followed Otten to CAA.

Moore opened the Jason Wu show at September’s New York Fashion Week, appeared in the Fenty x Savage Amazon Prime special (a show that was sold, incidentally, by WME-IMG’s Endeavor Content wing) and has a fragrance in the works. “I’ve been getting opportunities I never would have been considered for before,” they said.

Carino has also added to his roster designers Kerby Jean-Raymond, whom he represented in elevating his relationship at Reebok to global creative director; Tommy Hilfiger, and Prabal Gurung.

“He looks at me not just as a designer but more,” said Gurung, who hopped from WME-IMG, adding that he “has nothing but respect” for his former agency. WME-IMG did not respond to a request for comment on clients who have left for CAA.

CAA has made moves in the fashion industry before. In 2011, after hiring a key executive from Ford Models and Modelinia, the agency signed several designers, including Rag & Bone’s David Neville and Marcus Wainwright, Derek Lam and Catherine Malandrino, and represented New York Fashion Week venue MADE. Some of those clients are now represented by WME-IMG, illustrating the movement that often happens between agencies.

This time, Carino is taking a more holistic approach to the business. A 16-year veteran of CAA, he began studying the fashion space two years ago, specifically the differences in how models were being represented compared to acting and music talent. In today’s world of commercial endorsements, where a personality’s value is based on social media currency, top-tier models and designers have as much or more “value” than actors and musicians, and he questioned why they weren’t being paid the same.

“It was the most ripe business for disruption I had ever looked at,” he said. Some modeling agencies have operated on a 40 percent commission structure — 20 percent of which comes from the model directly, and 20 percent a service fee from the buyer. “So if Prada has a $1 million budget, $400,000 is ending up at the agency,” Carino said, explaining how his 10 percent commission structure puts more of a brand’s budgeted fee into the pockets of models.

“Especially for people of color, it’s notorious we are underpaid, and he wants to change the wage gap. There’s no reason why models shouldn’t be getting paid celebrity rates when there is that kind of exposure,” said Dominican-American model-actor Dilone, who will play Pat Cleveland in Ryan Murphy’s upcoming “Halston” miniseries.

While an agency running on smaller commissions would certainly entice new clients, it seems like a strange business plan now, when fashion marketing budgets have been slashed and Hollywood agencies themselves are being historically challenged by the pandemic’s shutdown of so much film, TV and commercial production. Nearly every one, including WME-IMG, CAA, UTA and Paradigm, has had to lay off staff or institute pay cuts. One industry source questioned how CAA Fashion plans to get its new clients enough work in the current environment.

“I don’t think the influence of this body of people has changed,” Carino said. “The business opportunities that would naturally come through inbound phone calls to modeling agencies have slowed and stopped for a time, so it reinforces the value proposition of building out business opportunities not just within fashion and beauty but outside it.”

He believes his strategy will pay off by increasing models’ voices and value in the marketplace. “I don’t want to sign anyone who doesn’t want to be a spokesperson for change, because the only way we’re going to get change is if enough people stand up,” he said, crediting Lady Gaga (the two were romantically involved a couple years back) with instilling his sense of social justice. “She understood how to leverage the influence she had, to stand up for people that were marginalized…”

He’s counting on the payoff over time of building longer-lasting, personal brands for fashion talent, much the same as Hollywood stars and musicians have pivoted to launching their own liquor labels, clothing lines, beauty brands and media platforms, which are often more lucrative than their primary work. (Claudia Schiffer Chardonnay, perhaps?)

Carino is also prepared to toe the line: “It’s about saying ‘no’ to things we don’t feel are at an appropriate valuation. That’s the hardest part. But what changes the business is if you can’t access talent at the rates you’re accustomed to paying.” 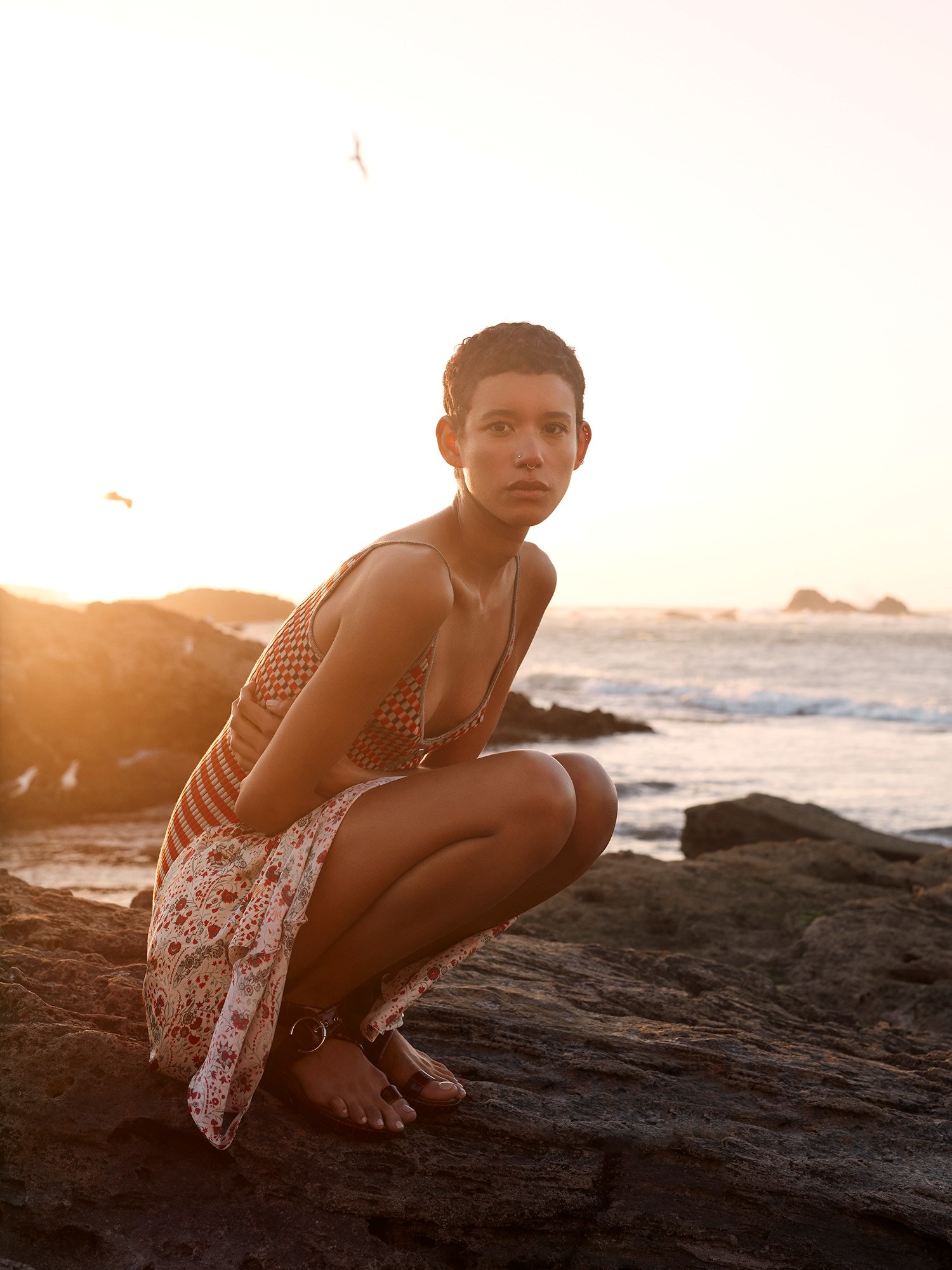