“Probably for the last 10 years there has been nothing so striking,” the executive said of the Clash de Cartier collection.

PARIS — Cyrille Vigneron is obsessed with Asia — though not in the way one would expect the boss of the world’s number-one jewelry brand to be.

No doubt, he is tracking the behavior of Chinese Millennials as closely as the next luxury competitor. But the French executive, who has spent a large portion of his career in Japan, is genuinely passionate about the region, as the decor of his office at the Cartier headquarters here attests.

He points out an Issey Miyake-designed lamp in a corner; a set of penguin vases by Takeshi Kitano; a signed work by Chinese artist Cai Guo-Qiang, and his own photographs of Japanese forests, hanging above his desk. “Everything in here is Asian,” he remarked. “I feel at home in China, Korea and Japan, in particular.”

His return coincided with a crisis in the watch industry — the result of a Chinese government crackdown on gift-giving and a devaluation of the renminbi, resulting in a glut of expensive watches on the market. Richemont took the painful decision to spend millions on buying back its own products — and then destroying many of the watches to keep them out of distribution.

Vigneron’s next step was to redefine Cartier’s territory, positioning an offer in a market crowded with novelties. “Beauty is more important than newness. Be true to who you are — it’s what really matters at the end of the day,” he said of his brand philosophy. 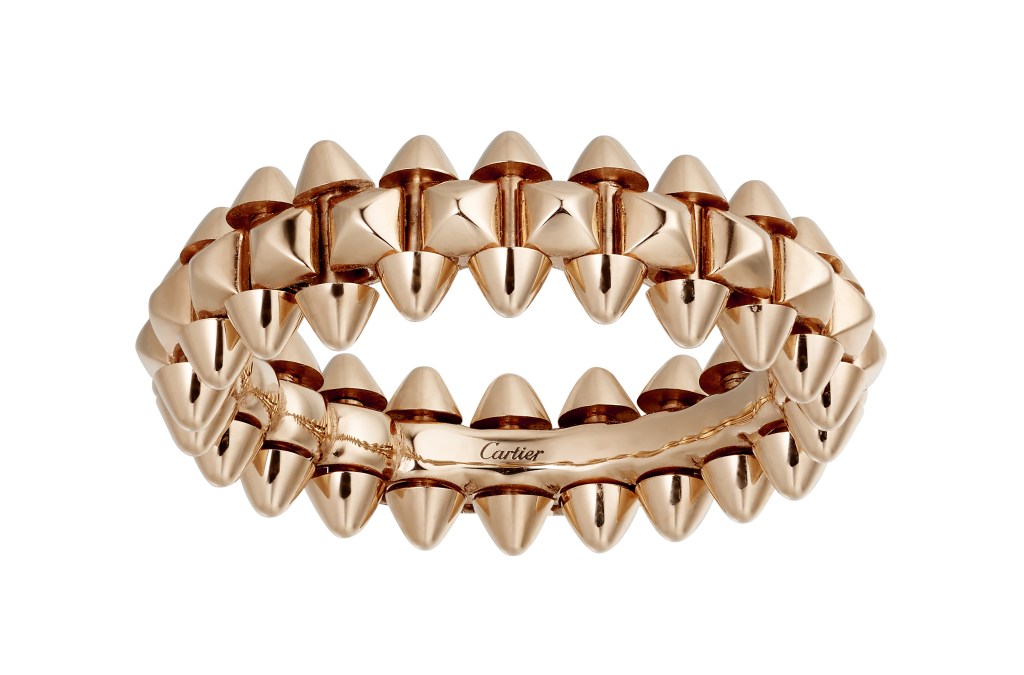 A ring from the Clash de Cartier collection.  Courtesy/Vincent Wulveryck

In line with Cartier’s existing collections — including Love, Juste un Clou and Écrou de Cartier — Clash is “both bold and feminine at the same time,” Vigneron said, with a design based on house codes such as picots, beads and “clous carrés,” or rounded studs.

“Probably for the last 10 years, there has been nothing so striking, and strikingly different,” boasted Vigneron, who compared the jewelry design to Valentino’s Rockstud shoe. “There is this trend for women to express femininity and power at the same time. We think this would perfectly fit in that perception.”

He noted the design was “not too sweet. It has spikes. It has character. It has strength.” The 18k rose gold pieces feature mobile elements that Cartier hopes will be addictive to the touch, making it a signature collection with multiregional, transgenerational appeal.

“It doesn’t look like any other brand. It’s not a copy of someone, it’s something truly original, and when you see it, it’s also immediately Cartier,” said Vigneron. “We don’t have to shout, to put a logo on it: you wear it and you see it’s different. It’s technically difficult to make, so it will also be difficult to copy.”

The line is competitively priced, with rings starting at $2,120, hoop earrings at $3,900 and necklaces at $2,370. The most expensive item is a limited-edition yellow gold and coral bracelet that retails for $52,500. “We think the price range will have a lot of attraction,” Vigneron said.

Scodelario is due to attend a gala dinner in Paris, as part of three days of launch events, including a pop-up restaurant run by U.S. culinary collective Ghetto Gastro. The half-British, half-Brazilian actress, best known for her role in “Pirates of the Caribbean: Dead Men Tell No Tales,” was chosen for her assertive personality.

She joins Jake Gyllenhaal, recruited by Vigneron last year in a departure for Cartier, which had not previously featured famous people in its ads — though he’s no fan of celebrity for celebrity’s sake. “If you work with ambassadors, they should have something to say, be talented for a reason, not just because they have millions of followers and nobody knows why,” the ceo said. 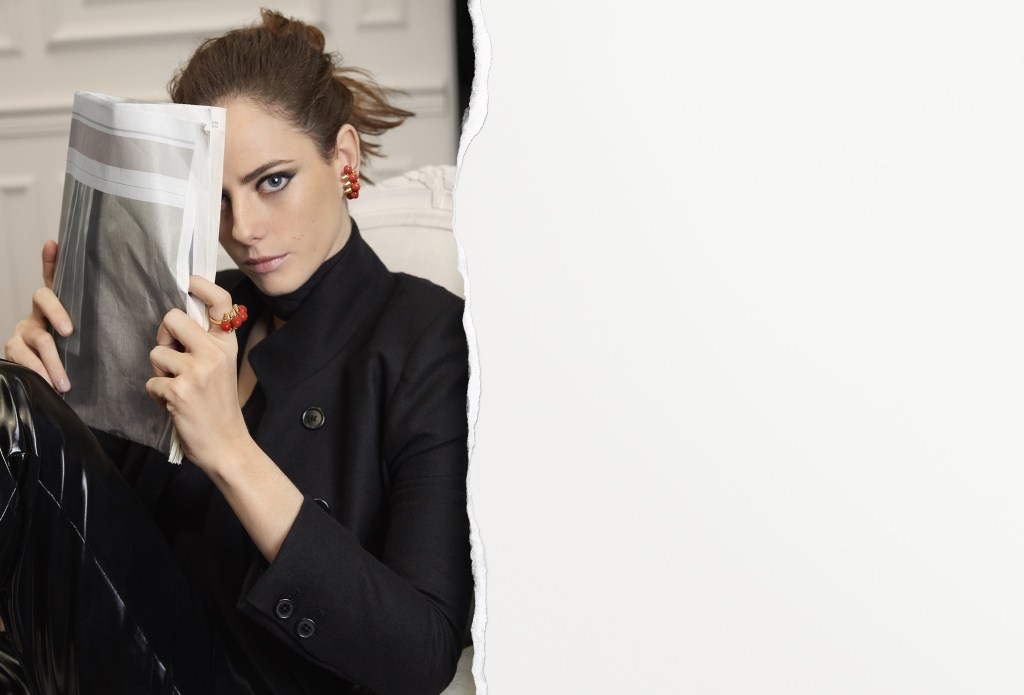 It’s part of a broader communications push for the house, which plans a series of events this year, including “Beyond Boundaries,” an exhibition of 850 pieces at the Palace Museum in Beijing’s Forbidden City, set to run from June 1 to July 31.

Vigneron noted that the majority of luxury customers in China are Millennials, given that they are the first generation with access to luxury goods.

“The former generation was not in luxury, so it’s a thing where you constantly need to build the brand. To give you an example, when three years ago we relaunched the Panthère, in the U.S. or Europe or Japan, it was a rebirth. For China, it was new. It had never been seen,” he said of the watch, originally introduced in 1983.

But the house is equally active in mature markets. A second show, “Crystallization of Time,” is scheduled to open in October at the National Art Center in Tokyo, with a scenography by artist Hiroshi Sugimoto. Cartier also plans to stage high jewelry events in London in June and in the U.S. in November.

With almost 300 stores worldwide, the brand has been equally busy on the retail front, opening new boutiques late last year in Zurich and Stockholm — the first Cartier boutique in Scandinavia — as well as a revamped London flagship on New Bond Street.

These were followed in mid-March by a gleaming new store at The Shops & Restaurants at Hudson Yards in New York City, in addition to the brand’s renovated flagship at 23 Place Vendôme in Paris. 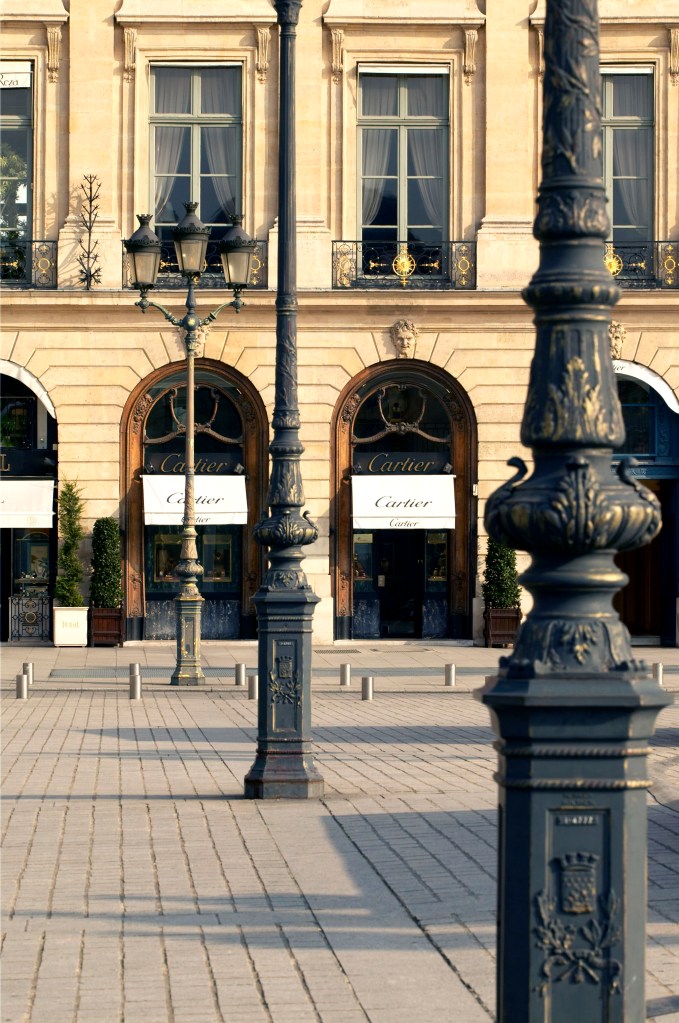 Vigneron believes that each store should be anchored in its location. “Place Vendôme is a theater by itself and the facades are all classified [historically protected], so you are limited in what you can do, but when you are inside, you should feel like you’re in a theater, so the way we’ve decorated this one is very different,” he noted.

The Hudson Yards store, by contrast, features a transparent, inviting facade and even has a foosball table inside, while its Cannes boutique can be converted into a lounge space for live performances — reflecting the needs of different customer groups.

“We have to constantly be attuned to how people want to interact and what they expect. Finding also that the world is more diverging, and people behave in different ways and use different tools and technology, if we do something centrally, it will always be a bit wrong,” he added.

To that end, Cartier opened its first retail innovation lab a year ago in Brooklyn. Another is bowing this month in Shanghai, and a third in Tokyo in October. “We plan to have another one in Europe, probably in Paris, probably next year,” Vigneron said.

“Retail labs can help either to identify what can be the special pain points that customers can have in one store and how to solve them, or how to interact with them,” he explained, noting that the company’s Monaco store, for instance, often communicates with clients via WhatsApp.

Online sales are also growing fast, following the launch of the Panthère collection on Net-a-porter in May 2017. “It’s increasing rapidly and it’s a faster growth than the rest, starting from a small base, especially in the U.S. and China,” said Vigneron, noting that e-commerce now accounts for around 10 percent of U.S. revenues.

“We see the growth of pure online transactions progressing quite rapidly, but we don’t see it replacing physical retail — it’s just that we have to adapt our retail to be connected to that part,” he added, citing the importance of increasingly personalized online marketing efforts, combined with in-store events.

“You must have something in the online interaction that makes their life easier, and on the other side have something happening [in the store] which is a positive surprise,” he said.

Cartier is also testing a host of new services, including loaning out pieces from its Cactus de Cartier jewelry collection in the U.S., and introducing a credit purchase facility on a pilot basis. The brand plans to sell a selection of vintage pieces in its historic flagships in Paris, London and New York, alongside re-editions of historic designs.

Still, Vigneron doesn’t see Millennials’ well-documented aversion to ownership extending to jewelry. “So far, we see that it remains quite personal and so the fact to own it, and to be the only one to own it, still means a lot. We’ve seen the emergence of a secondhand market for watches much faster than one for jewelry,” he remarked.

“When we see some attraction for sharing or transmitting, it’s inside the family and it has some meaning,” he said, noting that young women brought in their mother’s old Panthère watches to be repaired for free as part of the relaunch of the timepiece.

“Before we were transmitting more furniture, tableware and that kind of thing. We don’t do that anymore,” said Vigneron. “So we see an increasing role in transmission, but for that, you must have a brand that keeps its value over time.”

While the executive declined to comment on Cartier’s recent performance, citing the blackout period in the run-up to Richemont publishing its annual results on May 17, the company’s most recent trading update shows revenues at the group’s jewelry brands rose 9 percent to 5.4 billion euros between April and December 2018.

Growth in the group’s retail channel slowed in December due to a strong comparative base for high jewelry, as well as the impact of the gilets jaunes, or yellow vests, protests in France, which led to store closures for six consecutive Saturdays. 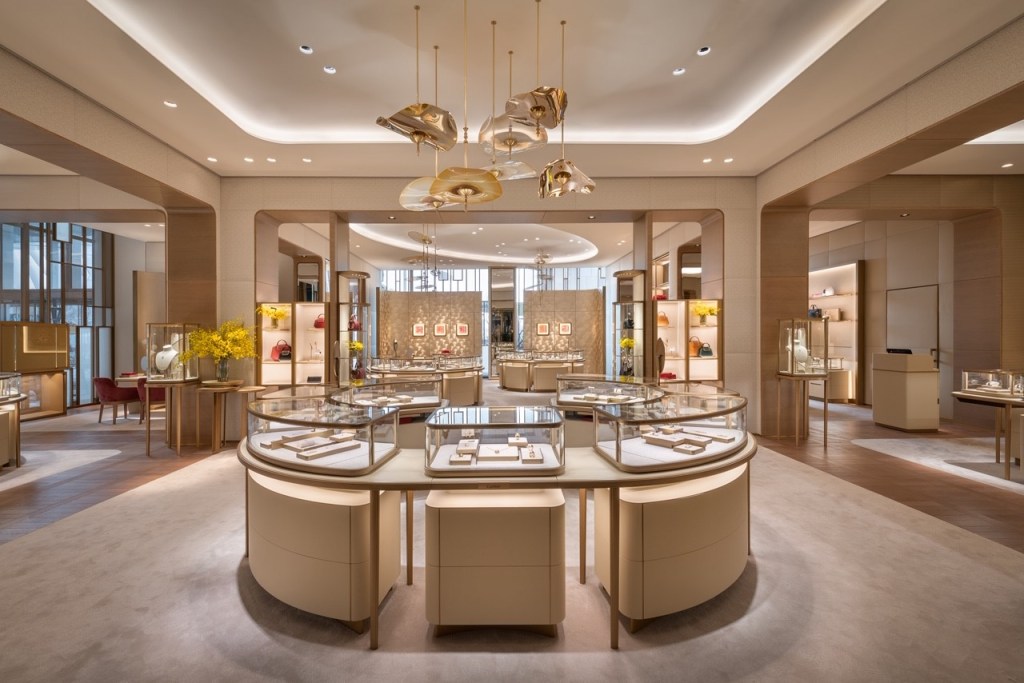 The interior of the Cartier store at Hudson Yards in New York City.  Courtesy

Still, the long-term trends are favorable, as millions of people join the middle class in China and elsewhere. “This trend doesn’t seem to be stopping so far, so we are quite confident that this in the long run can [work in our favor],” Vigneron said. “Brands that are clear about their own DNA will continue to be strong and to grow.”

He recalled a conversation he had with Italian architect Mario Bellini and navigator Giovanni Soldini as part of a pop-up presentation of the Santos watch at the Salone del Mobile in Milan last year. The talk explored what it meant to break rules.

It’s the reason, he said, that Cartier will never make a connected watch.

“We can’t make something which is made to be obsolete. It has to keep its value, so it’s something which is not us. Watches and jewelry are connected to our feelings. My Love bracelet for my 10-year anniversary connects me with my wife every day,” he said, proferring his wrist.

“We have to respect who we are, and not follow the trend just because everyone is doing it, but on the other hand, we make something that nobody else has made, by respecting the rules of jewelry. By being truly ourselves, we can make things which are truly different,” he concluded.