The Brunello Cucinelli company won't play defense in the post-COVID-19 scenario and will continue to invest on its retail network.

The experience of becoming a father might teach a fashion executive much more than management gurus or prestigious MBAs. “When my child was born, I realized that as a human being you have to accept that you cannot always keep everything under control. When you face critical phases, you have to be aware that specific difficulties of the moment won’t affect the value of the overall project.”

It’s not by chance that that the man behind those words is Luca Lisandroni, the co-chief executive officer of Brunello Cucinelli, a company that in the spirit of its founder has always highly valued the human touch and experience in the building of its business success. “We tend to be seen as incurable optimists, but there are many reasons why we look at the future with faith and hope. We are very grounded,” Lisandroni said, expressing the company’s approach toward the crisis generated by the coronavirus pandemic.

As reported last month, the namesake founder of the company confirmed his decision to take a step back, first revealed last year, and to pass the baton to two co-ceo’s.

Cucinelli retains his role as executive chairman and creative director of the luxury firm, and Lisandroni is flanked by Riccardo Stefanelli, who is in charge of product and operations. Lisandroni joined four years ago from Luxottica and his role extends to markets.

The company is launching yet another positive message with the opening of a new store in London only a few days after the end of the local lockdown, relocating into a two-story space on New Bond Street. Previously, Cucinelli had a smaller store on Burlington Gardens.

“It’s a fascinating store, for both its configuration and the quality of the building,” said Lisandroni, referring to the fact that the unit is located in a palazzo built in 1876 to house the legendary Grosvenor Gallery and which in the 20th century was used as a recording studio, as shown by the image of a lyre appearing on the large tympanum above the portal.

Inside, the store spans two floors where classic materials, including natural stone and chestnut wood are matched with modern metallic touches.

“The goal was to create a space [that] immediately reflects our identity but that at the same time has its unique personality and is deeply linked with its location,” Lisandroni explained, citing for example its Victorian green columns as symbols of the London aesthetic. “Our retail network is still relatively small and we like to focus on few openings but very personalized. Our ultimate intent is to bring our personal taste around the world, but creating a harmony with the place we approach.”

Brunello Cucinelli, which operates a network of 136 stores, saw a 2.3 percent drop in preliminary revenues in the first quarter as COVID-19 spread first in China and then to the rest of the world.

Here, Lisandroni discusses the strategy of the company and explains why Brunello Cucinelli will continue to grow over the next two years. 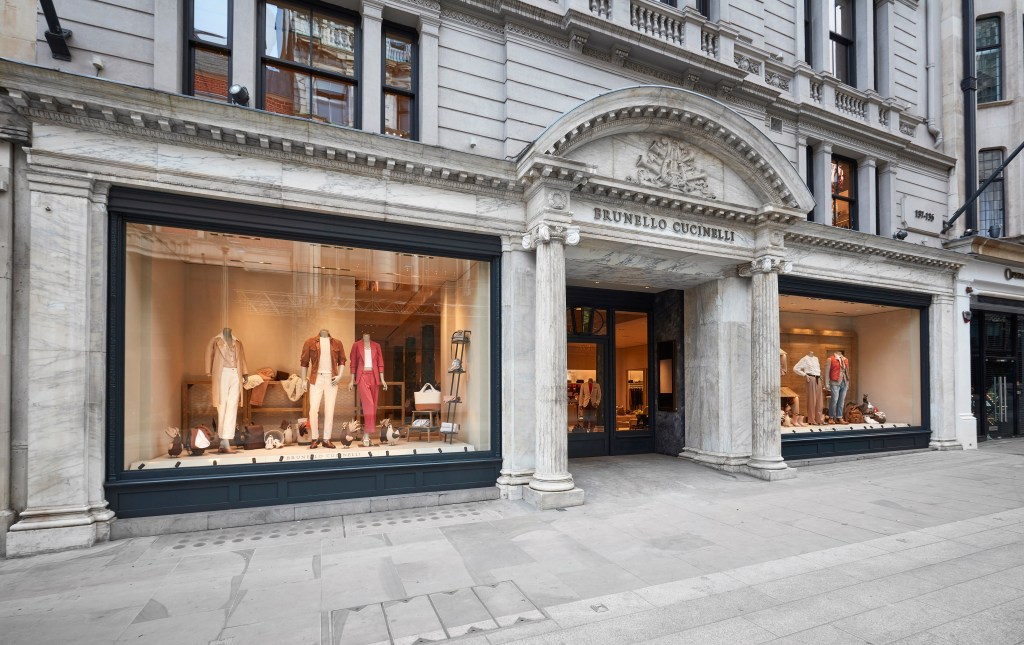 WWD: What’s the strategy behind this new store in London?

Luca Lisandroni: I think that the new store is a wonderful implementation of our idea: we feel positive about the upcoming months and about the next year. We believe luxury won’t change and it’s fundamental to continue to have important outposts in the most prestigious cities. Probably, to date, this London store is one of the most prestigious in our retail network and this opening wants to telegraph a message of faith.

WWD: Is the U.K. a key market for the company?

L.L.: London is the most international city in Europe. There, we have two stores, this new one in New Bond Street and one in Sloane Street, which is more of a classic neighborhood shop, as well as we have two important collaborations with Harrods and Selfridges, offering two different perspectives on our collections: the former more quintessentially luxurious and more traditional, the latter edgier and more irreverent. Many of our final customers frequently travel to London, and sometimes they discover the collections there and then they finalize the purchases in other stores around the world. This means that the British market is surely relevant in terms of business, but it also serves as a fantastic window for an international audience.

WWD: Are there more store openings in your pipeline?

L.L.: In the second semester of 2020, we will also relocate the Paris store moving into a bigger space on Avenue Montaigne. In other geographic areas, in Japan, early next year, we will open a shop in Tokyo’s Omotesando area and, in the second semester of 2021, we will relocate the Saint Petersburg boutique moving to Nevsky Prospect. Then, in the U.S., we are working to expand the store on Madison Avenue between the end of 2020 and the beginning of 2021. We believe we have great potential for both organic and inorganic growth, but instead of focusing only on new openings, we want to enlarge and relocate our already existing shops. Instead of entering second- or third-level cities, we prefer to maintain our exclusivity by consolidating our presence in the most prestigious locations.

WWD: What do you expect from the post-COVID-19 era?

L.L.: During this complicated period, we tried to deeply analyze the market. Let me say that it’s probably still too early to have a clear idea about what’s going to happen by the end of the year. However, we focused on the definition of a strategic project for the next two years. We feel optimistic about the future for several reasons. First of all, the emergency didn’t change anything in our structure in terms of creativity and people, which means we can continue to nourish our project of growth. Second, in China, which is probably the most important market for all the luxury players, consumers, post-COVID-19, are showing to have the same desires for beautiful things and honestly nobody would have imagined that they would have returned to buy so quickly. Third, the coronavirus crisis only accelerated processes [that] started to emerge in the second semester of 2019. Consumers are more and more focused on conscious buying, which means that they want to know how products are made and who made them. Even if in general companies talk more about environmental sustainability, for us human sustainability has always been a pillar of our brand and people are fully aware of this, giving us a competitive advantage. At the same time, after years where fashion has been dominated by a certain flamboyancy and boldness, it seems that consumers are now more attracted by a more sober elegance, which is what defines us.

WWD: It seems you are not planning to play defense in the upcoming months…

L.L.: This dramatic emergency definitely brought pain to people’s life. We are all aware that our daily life will change, we will definitely travel less, but we truly don’t think that consumers’ desires will radically change. For example, I don’t believe that people will renounce the idea of living a true experience in the store, treating themselves with a little pleasure. For sure, in critical moments, companies can decide to play defense, cutting budgets and investments. But I think this approach makes consumers even more resistant toward buying new products. Our strategy is to continue to express our company’s value, also through our retail plan in order to stimulate the consumers’ appetite, which might be dormant, but certainly not vanished. We definitely feel this responsibility.

WWD: Which markets do you expect to be more resilient? And which will suffer more?

L.L.: In the short term, we think Japan, Greater China and the U.S. will be the fastest recovering markets. In Italy, Europe and Hong Hong, which majorly depend on international visitors, in the next few months the business will be slower, until people gain the confidence to return to travel. We really think that people terribly miss destinations like Capri, Portofino, London, Paris, the Alps, but also Hong Kong and Macau. We are not worried about specific situations in the medium term, but we are adjusting our expectations.

L.L.: I don’t think Hong Kong is over, as many say. We are not too exposed there as other companies who mistake a city for a country. I think that right now Hong Kong has the huge opportunity to rediscover itself, stopping to promote itself only as shopping mecca, but rather also as an art hub and a holiday destination with a beautiful nature to offer.

WWD: Tell me about your e-commerce. Did it support the business during the global lockdowns?

L.L.: The online store performed very well and we are confident it will continue to work. We developed it not only as a shopping tool, but mostly as an asset to communicate our brand. After the digital overdose we all experienced during the lockdown, I think consumers feel the need to return to shop in the physical stores. We believe our stores are crucial to really stimulate all the senses of those coming to visit us. In our vision, the own e-commerce, which accounts for 3 percent of our total sales, is definitely a beautiful complement to our stores, which are the places where we can best express ourselves.

WWD: Pitti Uomo, which traditionally is the peak of your season and when you can meet your global clients, had been slated and then canceled. What’s the strategy for the upcoming sales campaigns?

L.L.: There are things you cannot change, and unfortunately, Pitti had to be canceled, but I think it will return stronger than ever in January. During the lockdown, we have always stayed in touch with our clients. At the end of June, we will present them the new men’s collection and in early August the women’s one. We decided to postpone our sales campaigns a bit because retailers need a bit of time to reflect on the status of their business before returning to make new purchases. We are trying to stay close to them as much as we can.

WWD: Will you host physical appointments or will you opt for digital solutions?

L.L.: We will present the collections at our different showrooms in the world. We will definitely have a virtual showroom, but we have a preference for physical appointments because we think that the real value of our products can be fully appreciated in person.

WWD: What about the presentation to the press?

L.L.: We will present the collections to the press in September in Milan, even if we hope that the fashion week will be still held in the spirit of sobriety, since I think that the situation will be still delicate in September. It’s no time for big parties and events.