The executive touted the company's innovative business model as a new three-year agreement was inked with Safilo Group for the production of Gucci eyewear.

That encapsulates Kering Eyewear’s growth over only four years and the team’s ambition to build a luxury eyewear company from a start-up in a consolidated industry, according to president and chief executive officer Roberto Vedovotto.

During a visit to Kering Eyewear’s headquarters at the 17th-century Villa Zaguri here, about an hour away from Venice, Vedovotto spoke of the newly inaugurated logistics center — unveiled by Kering chief François-Henri Pinault during Milan Fashion Week last month — and provided an update on the performance of the company, which he set up in 2014, launching a new business model.

Today, Kering Eyewear develops and distributes collections for 15 brands: Gucci, Saint Laurent, Bottega Veneta, Alexander McQueen, Stella McCartney, Alaïa, Brioni, Boucheron, Pomellato, McQ and Puma. In March 2017, Compagnie Financière Richemont became a stakeholder in Kering Eyewear, which led to the production of Cartier eyewear. Collections for Montblanc, Courrèges and Balenciaga have been added since January. From 33 employees in December 2014, Kering Eyewear now has around 1,300 employees, of which 60 percent are women. Out of the total, 55 percent hail from countries outside Italy.

In 2018, the company reported sales of 495 million euros, up 45 percent compared with the previous year. Vedovotto said revenues climbed 21 percent to 321 million euros in the first half of 2019.

“We started from a white piece of paper, and the company was profitable after three years,” Vedovotto said of the achievement, praising Pinault’s farsightedness and support in upturning an established industry by taking control of Kering’s eyewear business. “People were skeptical it could work, and now others are following, but we were the first,” said Vedovotto — presumably a jab at LVMH Moët Hennessy Louis Vuitton and the establishment of a venture with Marcolin, called Thélios, inked in 2017.

The visit on Thursday coincidentally took place as rumors circulated about Kering Eyewear possibly looking at buying Safilo Group. Vedovotto firmly denied any interest in taking control of the Italian eyewear manufacturer. On Friday evening, at the end of trading in Milan, the rumors were silenced by a joint statement issued by Kering Eyewear and Safilo revealing the renewal of their production agreement to supply Gucci-branded glasses.

As the previous contract expires at the end of December 2020, a new three-year partnership will come into effect starting January 2021.

The agreement helps preserve Gucci’s Made in Italy production and it has significant social implications, supporting Safilo at a time of reorganization for the company and the eyewear manufacturing district. Safilo had been impacted by the expiration of the Gucci license at the end of December 2016, following Kering’s decision to internalize manufacturing, but the French group continued to work with Safilo through a production agreement. Safilo manufactures eyewear collections for a range of labels including Dior, Fendi, Givenchy, Max Mara, Marc Jacobs, Tommy Hilfiger and Kate Spade, but, as reported in July, the eyewear specialist revealed that after 23 years the licensing agreement for the Dior and Dior Men collections of sunglasses and optical frames will end when it expires on Dec. 31, 2020, in view of the Thélios venture.

“Since we started out, we had a manufacturing agreement with Safilo for Gucci. The quality and service they offer are excellent, we are very happy with this relationship,” said Vedovotto, who served twice as ceo of Safilo, publicly listing it in 2005 after turning the company around. “We do not own manufacturing facilities by choice, we do not want to buy factories now or in the future,” he noted. “We want to be flexible to obtain the best product with the best manufacturing facilities. We have a very sophisticated network of 40 suppliers, mainly in Italy, which accounts for around 65 percent of total production needs, but also in Japan, France and China. We are one hour away from our suppliers and we’ve helped revitalize the Italian eyewear district.”

Although Vedovotto declined to provide financial details about Gucci, the brand ranks first in terms of Kering Eyewear’s business, followed by Cartier, a label he defined as “super relevant, really unique in our category, with extraordinary icons.”

As part of the agreement with Richemont, Kering Eyewear took control of Manifacture Cartier Lunettes in Sucy-en-Brie and its 240 employees, renaming the production facility Manifacture Kering Eyewear. “I had never seen such an extraordinary plant. It’s unique and the level of attention to detail, the quality of the manufacturing, are extraordinary,” said Vedovotto.

Asked if Kering Eyewear could produce other brands under the Richemont umbrella, the executive demurred. “Richemont’s other brands have arrangements that are current — as things evolve, we will see,” he said, underscoring that Kering Eyewear is “open to evaluate the production of other brands, but not for the sake of it, only for those that are controlled by our shareholders. We are not in the licensing business.”

A sign of Kering Eyewear’s expansion and development, the fully automated logistics center in Vescovana, about a half-hour drive from Villa Zaguri, covers 162,000 square feet and allows the company to stock more than five million pieces and to carry out more than 4,000 shipments a day.  A greenfield project, the amount of the investment was not disclosed, but it clearly has an impact on the region, with the employment of 170 workers in logistics and quality control activities. “The hub allows us to have more control and be more efficient. Smart automation grants us flexibility, and we can offer dedicated solutions to manage different product categories and customer needs,” observed Vedovotto.

He had shortened lead time to production, now 10 weeks from the briefing to the engineering kick-off. Vescovana’s hub has obtained the Leed Silver Certification as a recognition for its minimal impact on the environment. 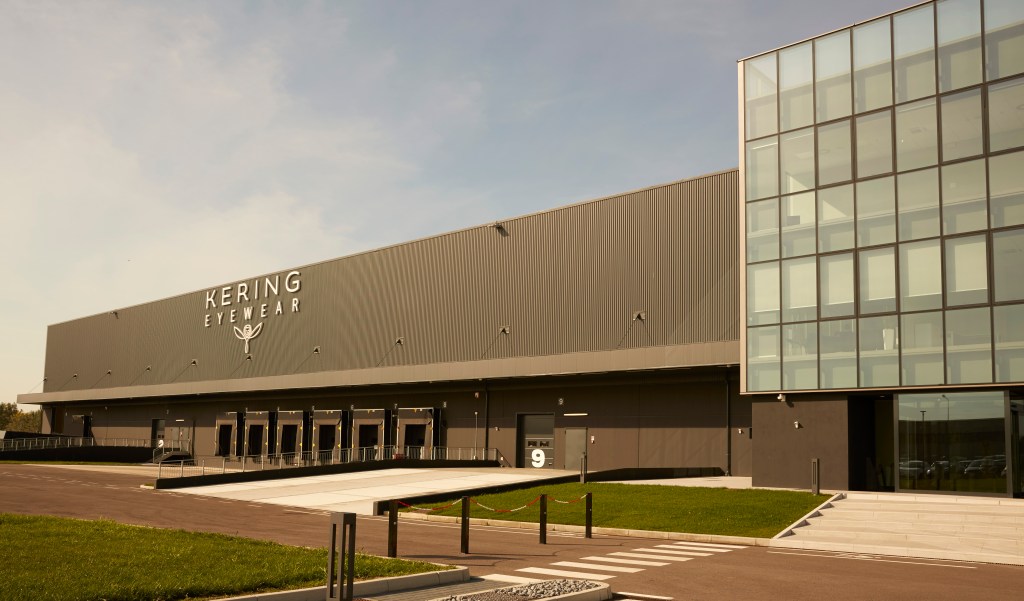 In sync with the Kering Group, sustainability is a focus for the company, which will be launching a new alternative form of packaging in the first quarter of next year, which is focused on reducing and upcycling waste. It has also invested in full traceability through blockchain. “The ambition is to create complete digital identity of frames by the first quarter of 2020,” said Vedovotto.

The ceo touted a business model that allows the company to “fully reflect the brands’ identities and fashion trends,” even closely collaborating on last-minute changes on styles shown on the runway, for example. Gucci has been emphasizing its eyewear on the catwalk and investing in dedicated communication and marketing initiatives, fully integrated in Kering Eyewear. The company’s designers are specifically dedicated to each brand, working at the fashion labels’ offices full-time, in Rome for Gucci and in Paris for Saint Laurent, for example. There is also an Asian design team for that market, attentive to specific shapes in that region. “We have a different relationship with the brands because we are not an external supplier but colleagues, and we are so much closer to what they do, the barriers are lower,” Vedovotto explained. 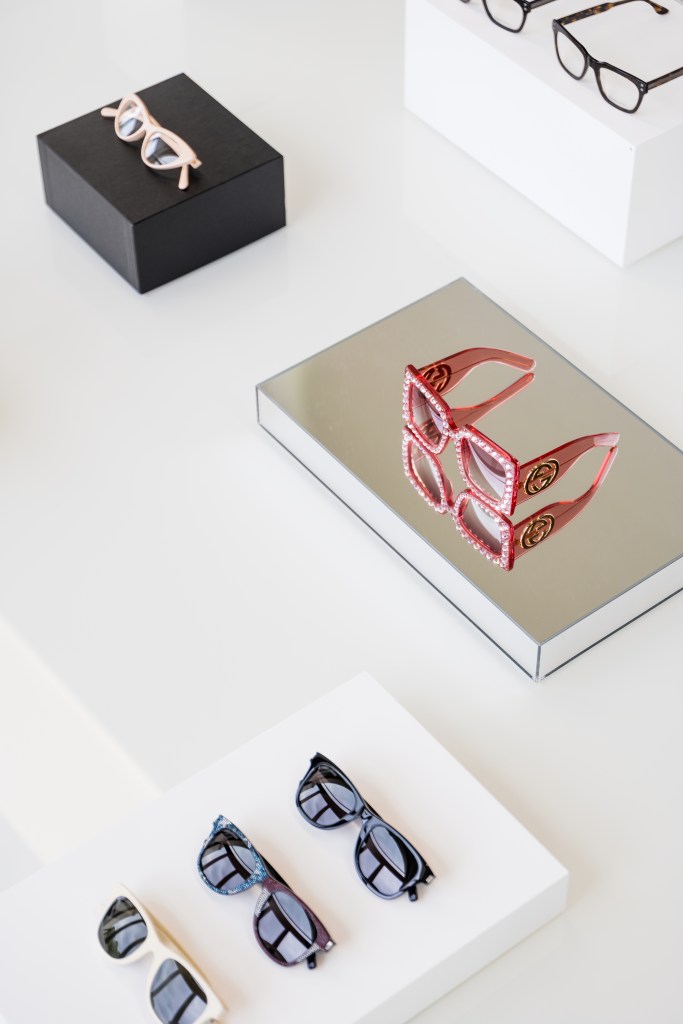 Independent opticians are the main distribution channel for the company and its business model also allows for distribution to be fully aligned with each brand’s image and positioning. Vedovotto declined to put a number on the global points of sale, but said the company had over the years cut and streamlined the number of stores by 30 percent. “Productivity has actually increased, we have a bigger business than before, as each door buys more product,” he said.

In terms of market share, business is balanced, with Europe accounting for 45 percent of sales, followed by the U.S. representing around 30 to 35 percent, and the rest in Asia. “We don’t see any market really suffering, we are having a very good run, I am optimistic,” said Vedovotto, citing Hong Kong, however, as a more “difficult” region because of the political turmoil there.

The global eyewear market was valued at 120 billion euros in 2018 and is expected to reach around 155 billion euros in 2024, posting a compound annual growth of 5 percent, said Vedovotto, citing studies by Euromonitor, Worldwide Luxury Market Monitor Bain & Co. and Altagamma. At wholesale, the high-end frames and sunglasses business is valued at around 3 billion euros.

Changes have been sweeping over the eyewear industry, driven partly by the giant merger between Essilor and Luxottica. “We work very well with EssiLux, it’s a very important client,” said Vedovotto. His belief is that “not much will change but there will be more opportunities to work better with the independents.”

Kering Eyewear accounts for around 20 percent of the luxury eyewear market. “Our mission is to be the leader — it also depends on the EssiLux strategy. In five years, we got very close, let’s see what happens in five to 10 years,” said Vedovotto. 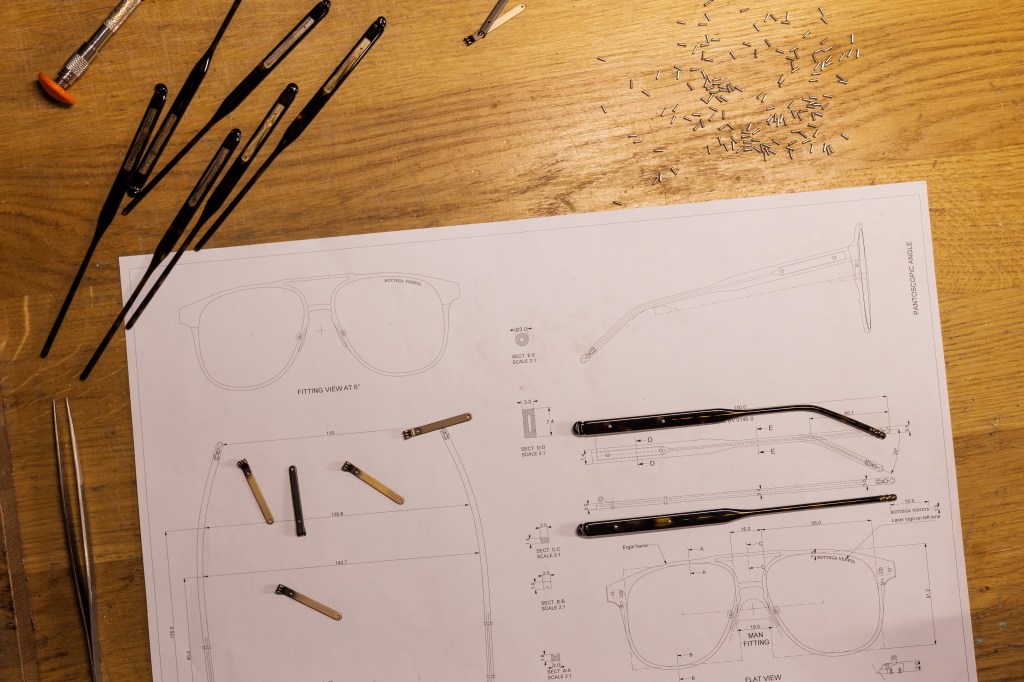