While in the midst of a turnaround of his company, Della Valle insists on staying away from "distorting" his brands, as he discusses he new sprawling Tod's Studios unit in Milan's Via Montenapoleone.

“We have grown one step at a time, without ever distorting our brand and avoiding drastic mistakes, with the goal of treating our customers well by offering the best quality products,” said Della Valle in an interview at the group’s stately headquarters here ahead of the official unveiling of the Tod’s brand’s new store on Sept. 21.

Della Valle believes in consistency. “My determination to stay clear of trends that are popular but could misrepresent our brand has cost us in the past two or three years, but it will pay off,” he admitted in his usual soft-spoken way. For example, he said he has “banned” designing sneakers that follow the most common styles. “We do them our own way,” he explained, adding that the introduction of the No_Code project last year, which includes a trademarked “shoeker” — a mix between a shoe and a sneaker — is performing well.

“New markets have a different perception [of fashion] and are very fast so you must earn their loyalty every day. But now we have opportunities we never had before, and we can sell [throughout] 24 hours across the world so we want to maintain our reputation and keep up the brand’s good taste. We have to be very clear with our message,” Della Valle said.

An “epochal” change, he said, is that “all the most important brands have started to do shoes well, and competitors are increasingly aggressive, so we must always have a reason for a customer to come in our stores, whether it’s for a shoe or a bag.”

Della Valle has over the years emphasized the link between Tod’s and the Italian lifestyle and artisanal craftsmanship. This, however, does not mean a static approach and he has been investing in a major turnaround of Tod’s, launching a new business model, including a project called Tod’s Factory, in a reference to Andy Warhol, and eyeing a younger customer through capsule drops and limited editions. This has led to an overhaul of production, design, marketing and logistics facilities, to which the group’s 5,000 employees, plus another 5,000 to 6,000 “satellite” workers, have had to adapt. “We must foresee the product, not follow it, and then build a highly precise marketing and communication strategy around it,” the ceo said.

“This is a seismic shift; we can’t think like we did six or seven years ago, everything has changed radically, our communication and our service. Mobile tools make everything old immediately. Before, a nice news story could last three months, now after three days we move on to something new.”

Tod’s Factory allows the company to “have new elements to speak about the brand in the right way, combining heritage and our vision of the future,” said Della Valle, who does not want to alienate Tod’s core customers but is also reaching out to the new 35-year-old shoppers who are “more loyal, reflective—and wealthier.”

Della Valle sees the new Milan store, covering 10,800 square feet over one floor and located on Via Montenapoleone, as one way to keep Tod’s customers engaged and excited about the brand. Called Tod’s Studios, it is the third new retail concept following the Tod’s Apartment concept unveiled in Sloane Street in London in September 2018 and Tod’s Library at Hudson Yards, opened last April.

“Just as in movie studios, where everything changes depending on the film, this store will change depending on the season, the capsule or the limited edition. Storytelling has become fundamental and we can rely on our real history,” said Della Valle, touting the store’s integrated omnichannel service. Tod’s is leveraging the integration of the Italiantouch e-commerce platform it acquired last year. The site is growing at a high double-digit rate, he said, trumpeting control over merchandise and transactions, which will continue to boost business.

“There is a jungle of products out there from who knows where, and we must be very careful, so that customers won’t ever doubt the quality of our brand,” he said. However, he enthused about the “strong relationships” Tod’s has with qualified partners such as Yoox, Net-a-porter, Mr Porter and MyTheresa, among others. 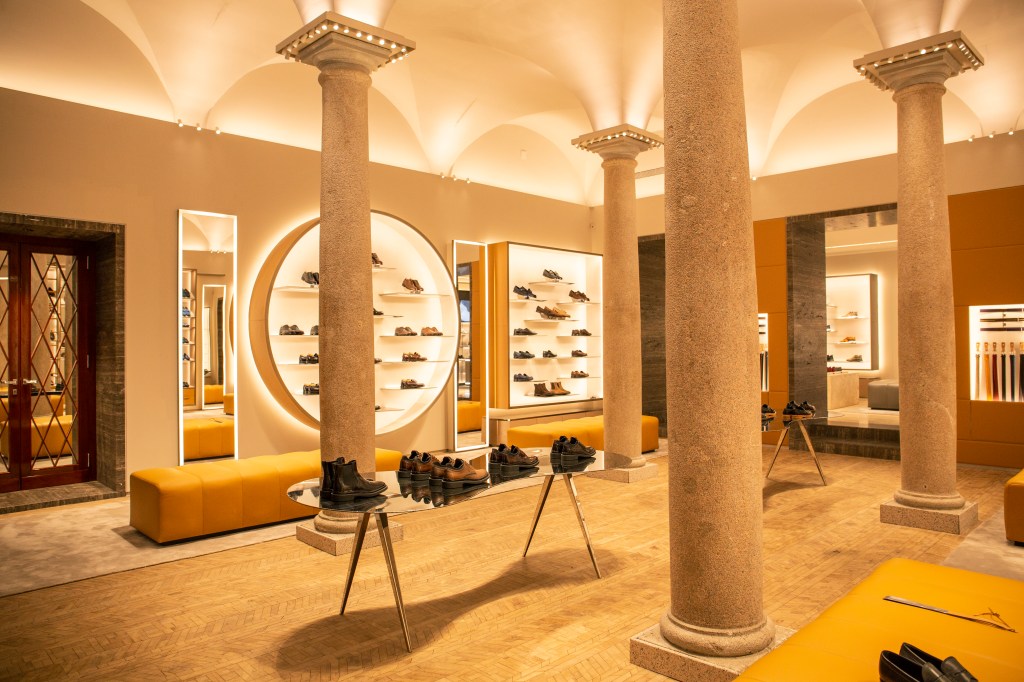 Della Valle was especially pleased with the location of Tod’s Studios, as he admitted he had long wanted a store on Via Montenapoleone, but he needed to find an expansive space on one floor. The venue needed “enormous restoration,” and the entrepreneur said the final figure for the investment will be finalized next month. “It was the highest investment ever made for [one of the company’s stores],” he added. Tod’s SpA, which includes the Tod’s, Roger Vivier, Hogan and Fay brands, is publicly listed and will report its nine-month sales on November 6.

“We expanded the doors, and set up very precise focus points, because people want storytelling but short and practical,” he mused.

The layout is marked by a certain sense of movement, as the rooms are presented in different sizes and heights, with a few steps here and there or slightly raised floors. There are curved structures and displays alternating geometric shapes. Large burnt orange leather seats punctuate the space.

There are wall units that can be moved and are interchangeable, allowing the spaces to be versatile, and elaborate oak floors contrast with travertine floors in a titanium color at the entrance. Standouts are two Ron Arad tables and Kris Ruhs graphic installations. 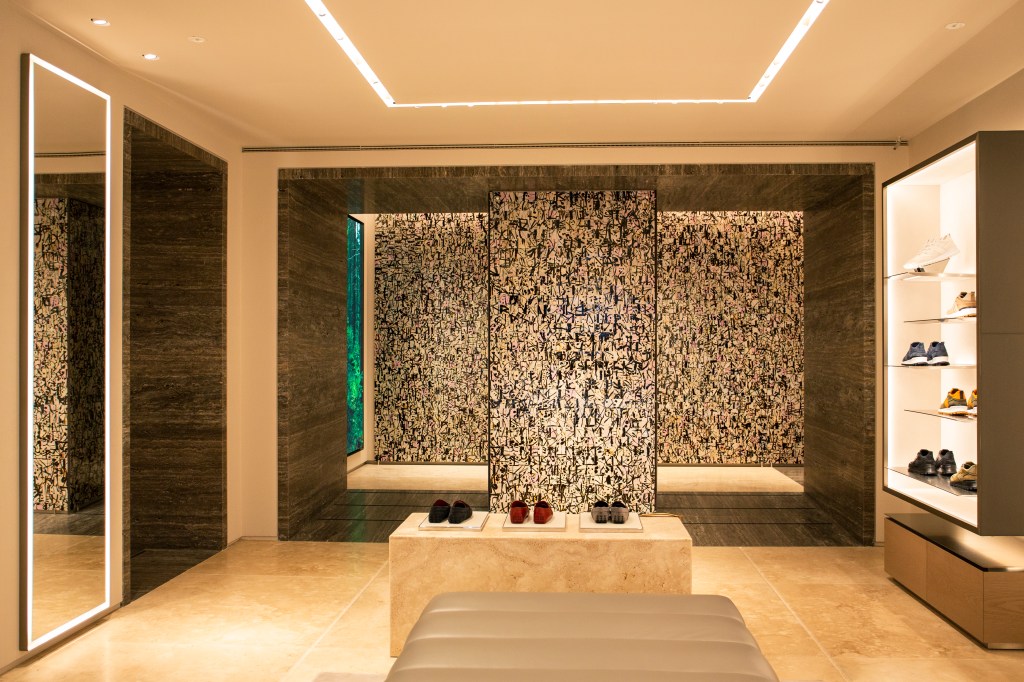 In addition to shoes and bags, the store carries apparel and accessories for men and women, including eyewear. There is a library that emphasizes Tod’s craftsmanship and custom-made Gommino loafers or D-Styling bags. One area is dedicated to the Tod’s No_Code project with walls in steel mesh. A pop-up celebrates the Tod’s Factory capsule in collaboration with Alber Elbaz, which Della Valle said is performing “very well.” Future collaborations will also be displayed with a dedicated pop-up.

The banner for the first time also includes a private club for Tod’s “most loyal customers,” where they can shop but also have a drink or eat as it includes a small separate dining room. Framed by Marquinia black marble and walls covered in walnut wood, the club features two fireplaces in black stone, suede sofas and contemporary art. For the time being, there are no plans for another Tod’s Studios.

The store’s opening in Milan emphasizes the city’s strong moment. “It’s unquestionable: Milan is growing and is showing increasing quality, comparable with other world capitals and Via Montenapoleone represents Italy in terms of global luxury shopping,” said Della Valle. Tod’s existing banner in Milan’s Galleria Vittorio Emanuele II continues to operate, while the company closed its Via Spiga store.

Although the changes and the investments, which last year amounted to 44 million euros, have dented the company’s revenues and margins, Della Valle stands by its strategy and has recently bought additional shares in the group. His family now controls more than 70 percent of Tod’s, he said. “We have all the patience we need. There’s nothing to be surprised about [increasing the stake]. We believe our shares are undervalued and we are confident in the way we operate. This is the best and safest deal and we believe in our portfolio of investments.” As reported, 2018 earnings, net of minority interests, totaled 47.1 million euros, compared with 71 million euros in the previous year, on revenues that decreased 2.4 percent to 940.5 million euros.

Della Valle also continues to be upbeat about heading a public company. “The Bourse has always been a good choice. This is a year during which we need to work without stress, checking the numbers but investing what is necessary in the respect of the investors.”

Della Valle himself has been one of the busiest investors in Italy, diversifying his business interests for years through a series of personal and family investments in a variety of international companies including eyewear maker Marcolin; motorcycle firm Piaggio; renowned coffee-machine maker Bialetti; RCS MediaGroup, which owns the daily newspaper Corriere della Sera; furniture producer Poltrona Frau, and film studio Cinecittà. Last year he sold the Italo high-speed train venture with former Ferrari president Luca di Montezemolo and other investors and, more recently, with his brother Andrea, the city of Florence’s soccer team Fiorentina. In the 2009 to 2010 period he was one of the largest shareholders in the-then Saks Inc. prior to the U.S. retailer being acquired by Hudson’s Bay Co. Inc.

Responding to the rumors that periodically resurface about his possible retirement or taking a step back, Della Valle, who will turn 66 in December, chuckled and said: “Our working ways change. I am hoping that, once completed, the structure will be the correct one and reliable, so that I will be able to work 10 and not 15 hours a day. Now it’s definitely a full-time job.” 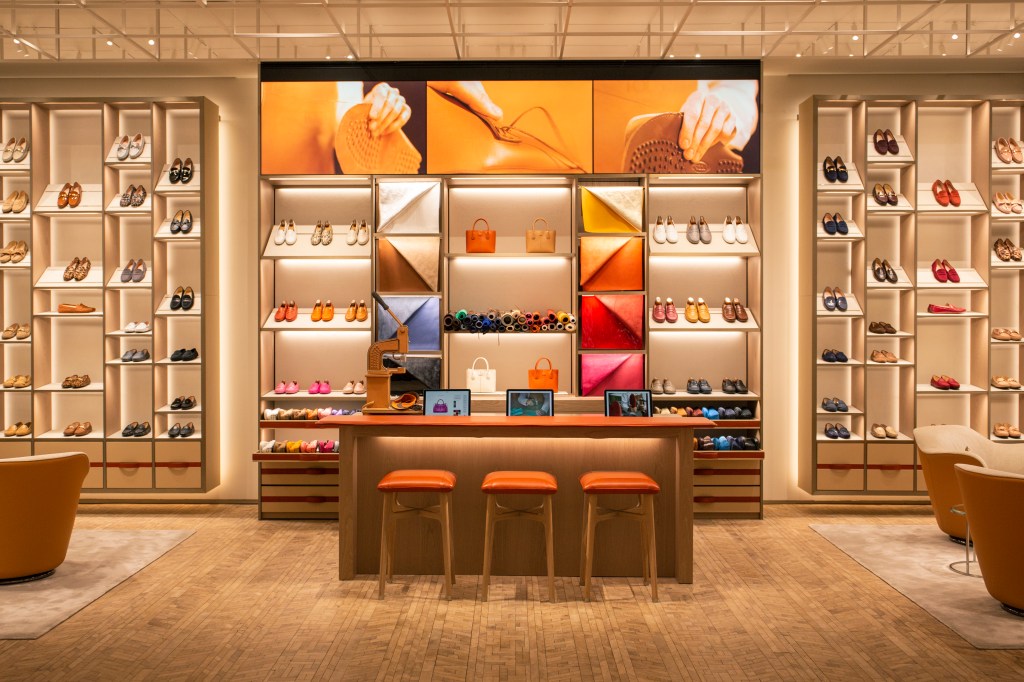