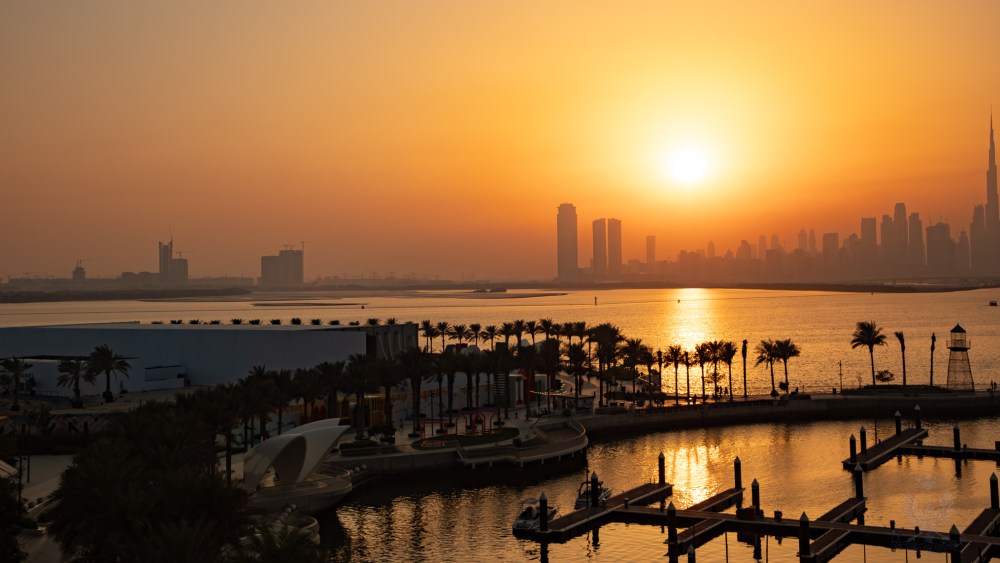 DUBAI, United Arab Emirates — “The whole world is in Dubai.” So declared a guest at Chanel’s repeat show for its cruise 2022 collection, as he reeled off the luxury brands that have held events here in recent days.

It was the latest in a series of fashion celebrations staged in the United Arab Emirates to coincide with Expo 2020, the world fair that opened on Oct. 1 after being postponed due to the coronavirus pandemic. The last 10 days alone have witnessed the return of Arab Fashion Week to its full physical schedule, in addition to events by Giorgio Armani and Cartier.

For its first overseas event since the outbreak of COVID-19, Chanel brought brand ambassador Penélope Cruz and a host of Middle Eastern celebrities to a box-like temporary structure at the waterfront Dubai Creek Harbor View Point to witness the first showing of its 2022 cruise collection in front of an audience, following its online presentation in May.

“I feel a strong connection with Dubai. I really love it, and the people are very nice,” said Cruz, wearing an ivory tweed skirt and jacket with a plunging back set off by an oversize double-C pendant. “I love the warm water, the colors, the sunsets, all of this so close to the beautiful desert — like, the combination. It’s not enough to come for three days. I think some day, I’d like to do a trip with my family that is longer.”

To coincide with her visit, the Spanish actress scored her first Vogue Arabia cover — wearing Chanel, naturally. Promoting “Parallel Mothers,” her eighth film with director Pedro Almodóvar, she will appear next January in “The 355,” an action movie co-starring Jessica Chastain, Diane Kruger and Lupita Nyong’o.

“We all are different agents, but I play a psychologist, somebody that is not used to be in the field and doesn’t want to be there, because she has a family,” she explained. “They all need each other to be able to accomplish this mission, and I love that everyone is good at something, but it’s not like one of those movies where everyone is good at everything, so it makes it more real.”

Egyptian actress Tara Emad has a packed schedule these days. The stage musical comedy “Aladdin,” in which she plays Princess Jasmine, is set to tour the UAE and Saudi Arabia, and she recently completed filming on “House of Maadi,” the Egyptian remake of the U.S. series “Why Women Kill.”

“I think the Arabic version of ‘Why Women Kill’ is going to be really cool, because I’m so excited to watch it as an audience. I look forward to see the other two sequences out there, how they’re coming out,” she said. Emad stars in the contemporary portion of the show, which is set in the ‘60s, ’80s and present day, but declined to say which character she plays. “It’s a surprise,” the former model teased.

Judging from the abundance of black and white in the audience, the mostly monochrome cruise collection, melding punk and Provençal influences, will play well to local sensibilities. Following two shows for 500 guests each on Tuesday, Chanel planned a series of activations, with the collection landing in local boutiques on Wednesday, ahead of its global launch on Nov. 9.

The looks from the line were due to be displayed at the show venue the following day, with VIP customers invited to attend Style Talks with brand ambassadors Caroline de Maigret and Soo Joo Park, who DJ’d at the evening after party, and in-house model Amanda Sanchez.

At the after party, guests posted up a storm on social media while waiting for the night’s main attraction: John Legend. The crooner, wearing a bow tie made of a black satin ribbon topped with Chanel’s signature white camellia flower, teamed up with Moroccan Canadian singer Faouzia on their duet “Minefields” and concluded with his hit “All of Me,” which had the whole room singing along.

Pavlovsky said Dubai offered a unique combination of a dynamic market and sound public management of the coronavirus crisis. The UAE has the world’s highest rate of vaccination against COVID-19, with 87 percent of the population having received two shots, according to scientific online publication Our World in Data.

“Thanks to its management of the health crisis, Dubai is virtually one of the only destinations today where you could organize this kind of show,” the executive told WWD. “The region is drawing a lot of events around fashion, art and culture because of its accessibility.”

Later this week, the fashion caravan will move on to Doha in neighboring Qatar, which is hosting several days of events including the Fashion Trust Arabia awards, the opening of Virgil Abloh’s “Figures of Speech” exhibition, and the latest installment of Dior’s “Christian Dior: Designer of Dreams” show.

Dubai was one of the first countries to reopen to tourism in July 2020, and hotel occupancy rates have risen steadily in recent months, boosted by Expo 2020 and the relaxation of travel restrictions in key countries such as the U.K. and Saudi Arabia — factors which should continue to support the tourism market into the first quarter.

“Today, it’s an important hub for trade and it’s reflected in business in our stores, which is booming, with a very different type of clientele from two years ago,” Pavlovsky said. “Before COVID-19, the region was gradually losing steam. Now, it’s bouncing back very strongly, with a very high-end customer base.”

The UAE central bank forecasts the economy will grow 2.1 percent this year and 4.2 percent in 2022, after contracting by 6.1 percent in 2020. Luxury brands are enjoying faster growth still, helped by the repatriation of spending by high-net-worth individuals during the first nine months of the year, although many have recently resumed traveling overseas.

Chanel has a dozen stores in the Middle East, with its recently renovated boutiques at Dubai Mall and the Mall of the Emirates representing the two most important flagships. There are additional locations in Kuwait and Saudi Arabia, managed by Etoile Group; and Qatar, where its local partner is Darwish.

While still relatively small compared with the U.S., French or Asian markets, it’s a growing region for the French luxury brand, despite the continued absence of Chinese tourists. “It’s a very solid market. We have a huge amount of ready-to-wear clients here,” Pavlovsky said.

In the VIP section at the after party were two of its most important local business allies, Patrick and Ingie Chalhoub, who head Chalhoub Group and Etoile Group, respectively.

Chalhoub Group, which distributes Chanel fragrances in the region, has seen a jump in spending this year, with a rise in visitors from neighboring countries as well as Western and Eastern Europe, the U.S., India and Pakistan.

“You can really feel that Dubai has opened up to the world, even though the number of visitors is much lower than it used to be,” said Patrick Chalhoub. “But the people who are coming to Dubai have more spending power than those that were here before the pandemic.”

Chalhoub Group has seen sales in Dubai rise 25 percent so far this year versus 2019, far exceeding its forecast for a 7 percent decline, he reported. People are buying less formalwear and fewer high heels, and spending more on sportswear and less classical styles for their personal pleasure, he said.

“We didn’t expect Dubai to bounce back so fast and it’s nice to see. Our problem now is how to meet that demand. We have to be careful not to raise prices, because the offer is more rare, and to continue to serve customers well so that they remain thrilled with their experience. It’s harder to do when there’s a bit more stress, but it’s a good problem to have,” he said.

Pavlovsky is similarly seeing soaring demand for Chanel handbags worldwide, leading to shortages in markets including the U.S., China, South Korea and France, although he denied reports that the company has introduced quotas. In the U.S., for example, customers are said to be limited to one bag per month, according to a source working in the resale market.

“There are no set quotas,” said Pavlovsky, noting the company has the same policy for all its stores. “Chanel’s strategy is to sell products for personal use. There are times when certain clients want more products than we have available in store, and then it’s up to our teams to perform the difficult task of matching offer to demand, which requires a lot of agility.”

While stocks were depleted by the temporary closure of Chanel’s handbag workshops due to lockdowns last year, he said this was not the main issue. “It’s not that we’re producing less, it’s that demand is much higher,” he explained. “Each year, we increase production, but we’re not going to double our handbag output. That’s not the strategy of the house.”

And price increases will keep coming, he warned, after hikes in January and July of this year. “There will be more, for the good and simple reason that prices of raw materials continue to shoot up,” he said, declining to give a date for the next adjustment.

He predicts Chanel will post double-digit growth in 2021, following an 18 percent drop last year, despite having been absent from the international events calendar for the last 18 months. Dior, by contrast, has been gobbling up market share by staging shows and exhibitions in locations including China, the U.S., Russia and the Middle East.

“Dior’s market share gains are not reflected in our numbers,” Pavlovsky said.

“Sometimes, I think it’s better to make less noise and to let things pass. During this period, our store teams have been very active with local customers to keep them engaged with the brand. Our runway shows have always been the best way to express the energy, the creativity and the strength of the brand, so we resumed those as soon as we could,” he added.

Chanel was the first to announce in May that it planned to stage a show with guests during Paris Couture Week, heralding the return of physical fashion shows in the French capital after nine months of online displays. “We’ll continue, of course, to do them overseas as well, because there’s no better way for us to connect to our customers,” Pavlovsky said.

But the executive reckons a bit of scarcity is not a bad thing for Chanel, which logged revenues of $10.1 billion last year, making it one of the biggest brands in the sector. “The idea is not necessarily to gain market share, because with our size, that’s not the objective. The idea, for us, is to continue to represent ultimate luxury,” he said.