LONDON — Chanel is going greener and shouting louder about its planet-preserving efforts, with a set of ambitious goals known as Chanel Mission 1.5 aimed at tackling climate change in line with the targets of the 2015 Paris Climate Agreement.

The overall program touches upon every aspect of Chanel’s business, which turned carbon neutral last year, from fragrance to runway, retail, sourcing and supply chain. The new program takes in emissions-busting community outreach projects, too.

Every move is aimed at limiting mean global temperature increase to 1.5 degrees Celsius, a figure set out in the Paris agreement, and addressing waste across the company.

Like most other luxury brands, Chanel has come under fire from environmentalists and the public for its perceived extravagance; its penchant for emissions-heavy events, with at least six runway spectacles taking place each year; and for producing a constant churn of merchandise from its beauty, fragrance, ready-to-wear and accessories divisions.

Under chief sustainability officer and company veteran Andrea d’Avack, Chanel plans to reduce its own carbon footprint and that of its supply chain, while also taking action outside its own business activities to help accelerate the transition to a lower carbon world over the coming decade.

Chanel Mission 1.5, which will be released today, lays out four key commitments: To reduce the company’s carbon footprint across its own operations and its entire supply chain; to shift to 100 percent renewable electricity on a worldwide basis by 2025; to “balance” residual carbon emissions, and to finance climate change adaptation, which involves working with the communities most impacted by climate change and conservation. 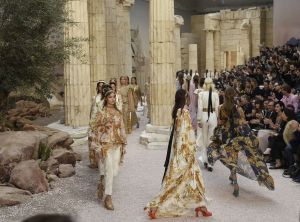 D’Avack certainly has visibility across the Chanel business: He has been working there since 1987, and served as president of Chanel Parfums Beauté before taking up the sustainability role five years ago.

In a telephone interview, he said these latest commitments were “imperative” for any luxury company.

“We have a responsibility to be at the forefront, especially with climate strategy, and we belong to the small group of companies that are leading the action. This is not a reaction to what the clients are telling us; it’s coherent with the way we’ve been working for many years,” he said. “I’ve been at the company for very long, all decisions that were made historically were driven to create long-term value, and you cannot create long-term value if you don’t integrate the environmental and social impact.

“Over the last two years, we have definitely stepped up the level of our ambitions and defined our targets. We’re not making incremental changes anymore, not just setting targets of what we are able to do, but targets that have been imposed on us. The objective is to remain within the framework of the Paris climate agreement,” continued d’Avack, noting that the most important step was to reduce emissions.

Chanel was among myriad industry players to sign the Fashion Pact unveiled by Kering at the G7 Summit in Biarritz, France, last year. As part of that pact, companies promised to eliminate single-use plastics, employ renewable energy and promote regenerative agriculture practices, among other commitments.

The brand, which is privately owned and run by the Wertheimer family, has been intensifying its sustainability efforts over the past few years.

In 2019, Chanel acquired a minority stake in the green chemistry company Evolved by Nature as part of its strategy to develop sustainable materials. Evolved by Nature focuses on designing and developing biomaterials-based products, and its Activated Silk technology, consisting of natural silk in liquid form, provides a nontoxic alternative to chemicals. 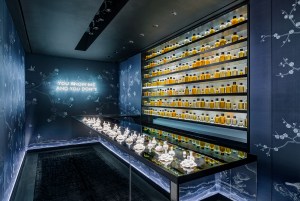 In the foreword to the new report, chief executive officer Alain Wertheimer described Chanel as a “creation-driven company” that aims to design “highly desirable products and experiences for our clients while generating a positive impact on the environment and society. As such, sustainability is a strategic priority for Chanel, and we have ambitious goals.”

In an interview, d’Avack addressed Chanel’s extravagant fashion shows and Hollywood-grade stage sets that the late Karl Lagerfeld loved so much — the purpose-built cruise liner La Pausa, the forest, the fully stocked supermarket, the airport terminal and beach with its boardwalk, dunes and lapping waves.

At a time when the public was being urged to reduce, reuse and recycle, Chanel was criticized for what many saw as wasteful extravagance. In 2018, the company was forced to respond to criticism, arguing that the cruise liner, La Pausa, would live well beyond the show. 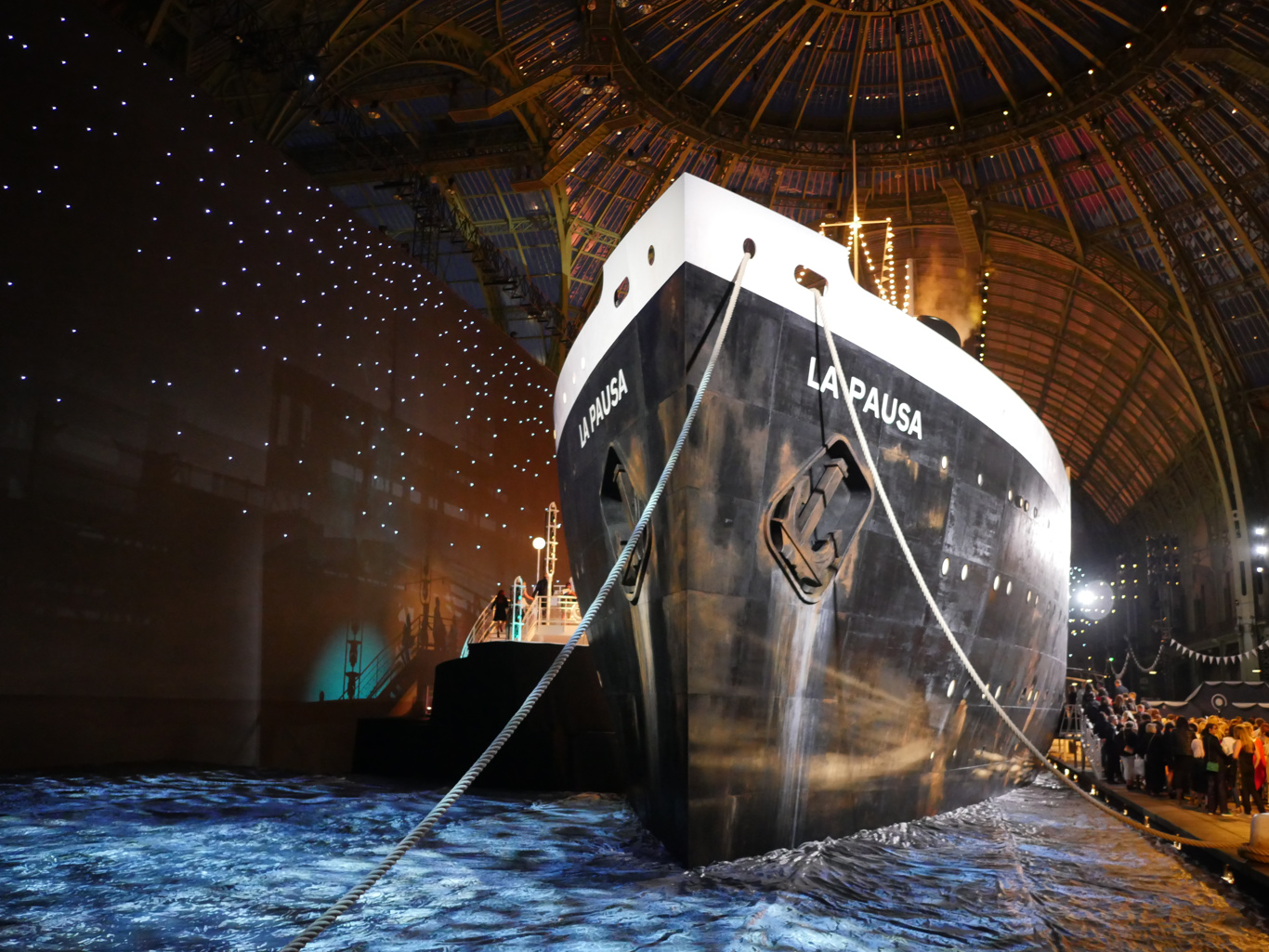 And it did: The cruise 2019 collection was displayed inside the vessel for three days for clients, staff and students to peruse, while seamstresses, embroiderers and other artisans who worked on the collection brought along family members to show them their handiwork.

“The entire set will be recycled, upcycled and repurposed,” Bruno Pavlovsky, president of fashion at Chanel, said at the time. “This reaction is not new for Chanel, but it comes after the mini controversy that followed our last show featuring real trees, which was unfair to the brand, and so we want to demonstrate our commitment.”

D’Avack responded to questions about the show sets — and the carbon emissions from all of those flights to and from Chanel events worldwide — in a similar manner.

“Shows are part of the way we can express the creativity of the brand. We are aware that there could be environmental consequences, that’s why we are really working hand-in-hand with our partners to conceive these shows in an eco-friendly way, trying to reduce the impact on the environment, making sure that we use materials that can be reused and recycled. There’s been a major push on that over the last few years, and I think it’s an important message.” 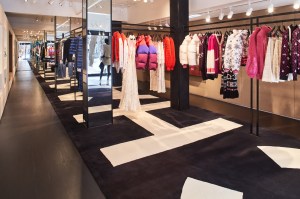 The interior of the Chanel store in Aspen.  Courtesy Photo

D’Avack also pointed out that the impact of these shows is not huge — and he’s correct. As part of the report, Chanel mapped its carbon footprint, and marketing and events account for 10 percent of overall emissions, compared with raw materials, 26 percent, and transport of finished goods, 24 percent, which together make up half of the footprint.

And those far-flung destination shows could well become a thing of the past, too, with Chanel having to balance a desire to speak to clients worldwide with the carbon emissions involved with jet-setting to exotic locales. It is set to stage its cruise 2021 collection on Capri, Italy, although that may have to be postponed given the spread of coronavirus in the country, which is now fully in lockdown.

“The fall shows happened in Paris in the framework of fashion week, so it’s less of an impact. But again, it’s really important to show the creativity of the brand, and it’s important to be near to our clients’ constituency. That’s why I think these [destination] shows are important. All of this falls within the framework of limiting our impact in terms of travel and it’s part of the journey which we’re starting on,” he said.

As part of its commitments, Chanel has taken action from a product and process point of view, working to lower sugar beet farm emissions (the natural alcohol in Chanel fragrances comes from French sugar beets); to reducing the weight and size of its fragrance packaging; to asking employees to swap work trips for videoconferencing; to increasing the renewable technologies and solar panel numbers at its plants worldwide, from New Jersey to Switzerland to Shanghai.

It is looking to invest $25 million over the next five years in projects aimed at protecting local communities from the impacts of climate change. The company is also partnering with start-ups and new tech companies to find solutions to packaging and formulations.

According to the report, it has signed a partnership agreement with a Finnish start-up, Sulapac, which has developed a bio-sourced and biodegradable packaging made from FSC-certified wood chips from industrial waste streams and plant-based materials. Chanel foresees using the innovative material for its cosmetic packaging.

D’Avack doesn’t think any of this is going to be easy: “They are ambitious targets and mean that we have to transform our whole value chain, the way in which we source, produce, distribute to the retailers and merchandisers — our product. It demands resources, dedication and the involvement of pretty much everybody in the company. That’s why we called this report a journey, because it takes a lot of resources and innovation to get there,” he said.

The four chief goals of Chanel’s new plan are:

• Reducing emissions across Chanel operations by 50 percent by 2030, equivalent to a 66 percent reduction per unit sold, and reducing supply chain emissions by 40 percent per unit sold by 2030, compared to 2018. To meet these reductions, Chanel said it would further strengthen its longstanding approach to the responsible sourcing and production of natural raw materials, while also continuously revisiting the way it designs, manufactures, transports and distributes its products. The targets have been approved by the Science Based Target initiative.

• Shifting to 100 percent renewable electricity on a worldwide basis by 2025. Chanel has joined the RE100 coalition, a group of influential businesses committed to the use of renewable electricity. Globally, as of 2019, Chanel already sources 41 percent of its electricity from renewable sources and expects this to increase to 97 percent by 2021.

• Financing climate change adaptation. The company plans to back projects that enable vulnerable communities to adapt to the impacts of climate change with the objective of reducing smallholder farmers’ and entrepreneurs’ vulnerability, while also building resilient raw material supply chains, both outside and within the value chain. Chanel is also investing in new technologies and start-ups, particularly in the field of raw materials and packaging, as well as in scientific climate research.

Chanel is working closely with SBTi, the Science Based Targets initiative, an independent organization that validates and approves companies’ carbon targets, and with RE100, a coalition of global companies (of which it is a member). RE100’s purpose is to accelerate change towards zero carbon grids, at global scale, and RE100 members have committed to using 100 percent renewable electricity.