How the Millennial son of a Los Angeles home design duo is reimagining high-end garments made better, not faster, in his own Factory. 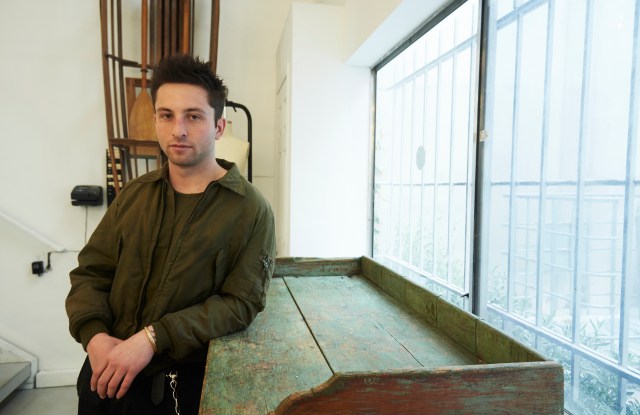 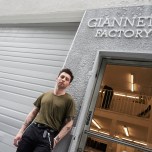 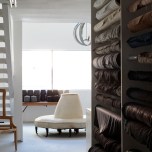 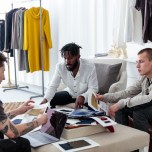 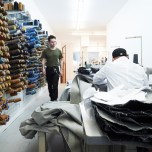 On a quiet commercial stretch north of downtown Los Angeles, in real estate parlance the “up-and-coming” neighborhood of Glassell Park, there’s a former automotive shop, unremarkable yet easy to spot because of its all-white exterior, where high-end niche designer and streetwear garments and bags are being turned out from sample to shipment.

These include David de Rothschild’s luxe, eco-conscious men’s wear line Lost Explorer, and Reese Cooper, designed by the 20-year-old influencer whose debut showing in Paris in January incited a frenzy among retailers such as Barneys New York.

Giannetti Factory, or simply the Factory, opened in September 2017 and is owned by 24-year-old Charlie Giannetti, who manages production of his parents’ (architect Steve Giannetti and interior designer Brooke Giannetti) furniture line and luxury clothing label there while evolving the business of producing clothes for other designers.

It was only six years ago that he was a freshman at New York University, taking fashion and business classes, when he parlayed his interest in screen-printing T-shirts into a one-off black T covered in Photoshopped graphics that he posted on Tumblr. It got more than 30,000 re-blogs (the equivalent of Instagram “likes” in a pre-Instagram era) in one night.

“I didn’t have a Tumblr following. It just hit a certain note at the right time,” said Giannetti, a lean, compact fellow with tattoos up and down both arms. “I think people were just starting to figure out the whole influencer thing. I wasn’t sure how to use it, but it was nice to connect to people through Tumblr who had already seen the image.”

After figuring out how to produce T-shirts in the Garment District, “I just kept making stuff and building the audience for it. The first shirt was $150 and I sold a hundred of them in 10 minutes. At that point, I thought that selling a bunch of shirts in limited quantities was cool, like, ‘Just do this and then you’ll come up with something new. And then do that and sell what you can, as quickly as you can.’ That set me on the path of trying to figure out a better way to do everything, whether it be putting everything in one place or finding the right people to connect with or taking all these segmented parts of the industry and putting them all together,” he said.

He soon realized, however, that “I always connected more to the holding of a product and flipping it inside out to see how they constructed it. I’m more interested in the actual building of it as opposed to the rest of it. Which is why I don’t have my own brand anymore,” he said.

But when he returned to L.A. after graduation, he realized the challenges of clothing production in a sprawling city, and the sacrifice in quality that comes with lower production costs. “Nobody was paying attention to the actual quality of the garments, and getting people to do nice stuff in L.A. is so challenging,” he said. While sourcing pattern makers and sewers for his parents’ furniture and clothing lines, the idea for the Factory was born. He found a space away from the downtown bustle and began to assemble a crew of people skilled in each step of the garment-making process.

The 3,200-square-foot, two-story space houses a first-floor showroom where clients can take meetings with retailers or peruse the range of samples, along with bolts of fabric, and cutting and sewing tables and machinery upstairs. Giannetti furniture and antiques are strewn throughout the all-white space.

“We have every type of machine; essentially the goal is to never get into a situation where we can’t make something. We do leather, buttonholes, tape seams, tacking, in-house patterns, marking, grading, the whole process. We just got a leather skimmer to do more detailed leather jackets. I’d love to have an embroidery machine and a direct-to-garment printing machine,” he added.
Giannetti is also a photographer, and produced Cooper’s lookbook and line sheets, a service he’s happy to provide “because it ties into sampling and pricing the pieces.”

While he says that small-batch brands like Lost Explorer are a perfect fit, the Factory has the capability to produce up to 1,000 units a week, so Giannetti’s goal is to diversify clients with different production schedules so that all teams are constantly at work.

At the moment, there’s Marcel Everette, an avant-garde unisex line designed by Garrett Wilson that uses custom fabrics such as sterling silver tape and decomposed corduroy that necessitate painstaking piecing and sewing, and a U.K.-based soccer star who is sampling an all-cashmere line of ath-leisure. And the direct-to-consumer lines, most of which are vehicles for influencers such as Jacob Keller, who, with 92,000 Instagram followers and no design experience has gone through a sample and production cycle at the Factory for his line Bare Knuckles without ever leaving his home base of Portland.

“He approached me. He has the ability to sell all D-to-C, and most brands when they start don’t have the audience to support production minimums. The influencers have figured it out,” he said, though he noted, “I’m hesitant to point the business in that direction, but it’s a huge audience they can have if they’re looking for a way to not do so much legwork for own their own brand…But I’d rather build the Factory with the other brands and monetize it in a different way.”

He said his dream is to operate a training facility of sorts, “so as opposed to having 50 sewers all work on the same thing to make it happen as quickly as possible, you have 10 groups of five that specialize in different things. And they move up the line as they get better, so you train people to think about the quality, and stop them from rushing. Eventually I would like to have a big enough space to where we can book people out on sew time and run everybody’s stuff really efficiently with very little waste, where everybody feels like there’s some upward mobility,” he said.

Giannetti is also betting that optimizing efficiency and profits while maintaining quality will help clients realize more competitive wholesale prices in order to thrive, which could lead to more win-win partnerships as brands such as Reese Cooper take off.

Next month, the Factory will expand into a back building that will double its size, and Cooper will take over the original front space for his own creative offices and photo studio. Not bad for a designer who doesn’t even own a car, but then again, Cooper doesn’t need one in the one-stop shop. “The running around aspect of making clothes in L.A. is where people just lose all this time. I can take all that off his place, charge him for the pieces he makes, and his business could accelerate,” said Giannetti.

Indeed, he reported, “We’re now sampling his second collection for spring 2019 that he’ll be showing in Paris this month. We can do it all here in two days from idea to final sample. In the past four days we’ve done two full looks, while 10 production sewers are producing the January collection that ships in June.”

While Giannetti has no aspirations to design his own line again, he is interested in building the Factory into a brand not unlike New Guards, “though without taking an ownership stake in the brands,” he added.

“The vision for this place in general is not to stay in a two-story building. I’d love to have a four-story building where we can separate retail concept space and manufacturing. And then do in-house photography, marketing, consulting. All these brands need the same thing, but they may not need all the services all the time. It makes more sense to have five brands that run in different things and use all the resources all the time.”

So far, the last nine months have been about testing the concept. “I made the space trying to fill in holes of all the problems I had when I was trying to have a clothing brand. In my early years of doing this I thought the actual quality of the products was a huge portion of success. Now it’s different. It becomes more about story, and quality should be more of a given. If I can guarantee at or above standards, and also put a little bit of morality into it, maybe we can make something that’s a little bit nicer that’ll last a little bit longer.”