No longer dominated by the cheongsam and hanfu, women’s fashion in China is as diverse as its 23 provinces containing the largest population of any country on earth. But what do westerners know about China and fashion besides the fact that the lion’s share of apparel — and other consumer goods — are produced there?

The second “China Day” at New York Fashion Week, cohosted by Tmall of Alibaba Group and Suntchi Brand & Technology Co. (and in partnership with the CFDA), aimed to satisfy that curiosity and promote a mutual fashion exchange between Chinese and American designers as well as consumers.

From a country where women are a noted minority, “#womenpower” was the theme of this season’s three-pronged event, which ran earlier this week and included: three runway shows from Chinese designers never before seen in New York; a pop-up shop within Opening Ceremony on Broadway, and a media conference, discussion and fashion showroom spotlighting the three designers — held at Spring Studios.

The first China Day NYFW event was held in February and focused on men’s fashion. 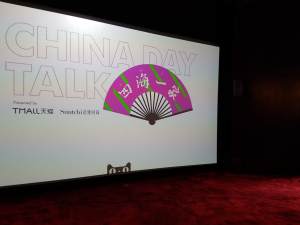 Jessica Liu describes Tmall as having two customers: shoppers and brands. Today’s Chinese consumers demand information when making purchase decisions, and foreign merchants and brands need information to decode the Chinese consumer. Being powered by Alibaba means having access to a wealth of data for both sides, as Liu demonstrated with statistics on its top fashion consumers, the thirst for individuality among China’s rising middle class, and market projection teasers such as consumer spending totaling $400 billion over the next three years.

To that end, Tmall aims to “enable and empower” up-and-coming designers and is targeting 100 new designers to help expand. Initiatives include working with partners such as Suntchi to hone design styles to best appeal to target consumers; solving supply chain challenges by connecting designers with manufacturers, and building brand awareness via events such as shopping festivals, which will help translate sales to brick-and-mortar channels.

During the event, Wen Zhou, chief executive officer and cofounder of 3.1 Phillip Lim, expressed resistance to embracing the Tmall platform. An American designer of Chinese descent, exemplifying Chinese #womenpower in the U.S. for decades, Zhou described making the leap as “scary” because of “first impressions.” But Liu was quick to quell any concerns.

“We have a solution for you,” Liu quickly answered with a smile. “We can talk later.”

JNBY — both literally and figuratively meaning “Just Naturally Be Yourself” — represented sportswear embracing the aesthetic of “modern, dynamic, interesting and calm.” The veteran of the three featured designers, JNBY has slowly been opening stores abroad for the past decade, including one Stateside in Seattle. Founder and chief creative officer Li Lin described the company as still “mostly China-based.” When she started the brand in 1994, she said “fashion in China was very uniform, and it was easy to stand out. The Chinese consumer is learning fast.”

Particle Fever is China’s first independent sportswear company, incubated by Tmall after winning a competition in 2016. A former New York attorney, ceo and founder Ren Jiujin, aka 9 Jin, embodied her company’s ethos of what she described as “functional, all-day fashion,” by pairing an oversize performance T-shirt with kitten heels. Equally confident in her collection’s reception at NYFW, Jin noted that “sports conquers all,” and alluded to a very acrobatic runway performance featuring a collection of model-athlete “stray cats” of different sizes, shapes and races, coming together in the spirit of team sports.

Angel Chen, whom Fang described as China’s “most influential brand talent,” fused art and fashion together with Chinese culture to create trend-forward, contemporary, unisex ready-to-wear. Founded in 2014 on the pillars of “curiosity and modernity,” bold colors and mixed ethnic influences are unifying threads throughout Chen’s collections — this season included. True to the #womenpower theme, Chen’s inspiration is Madame Ching, a Quing dynasty pirate who led a fleet of hundreds of ships — and whose fame and legend was immortalized in the “Pirates of the Caribbean” movie series. Chen describes her customer as “brave and energetic” 18- to 30-year-olds, with a “small body but very strong and independent.”

Regarding Chen’s point, sizing can’t be ignored when considering the Eastern-Western fashion translation. Just about every U.S. fashionista knows someone with a “direct-from-China” sizing fail story. Moreover, the geopolitical climate between the U.S. and China as well as other trading partners is strained and being impacted by everything from alleged human rights violations and theft of intellectual property to trade wars and tariffs (which is expected to impact accessories and leather goods).

Amid the noise of U.S. lawmakers calling for sanctions against China for operating Muslim detention camps earlier this week, industry experts and analysts continue to see business opportunities in China. But the political and trade tensions are real, which may have been the elephant in the room when Lin of JNBY, forewent her turn to answer the question, “What are your expectations for your first NYFW show?” Instead, Lin broke protocol to ask the Tmall team how they plan to bring Chinese brands abroad.

Still, there was an overwhelming tone of optimism at the event. Angel Chen confidently spoke of her brand and New York as having “the same DNA.” Tmall rolled out the welcome mat to western merchants with a platform designed for ease. And Steven Kolb, ceo of the CFDA earned a warm chuckle from the room with his brief remarks, “Good luck with your shows and I hope you get a lot of orders.”