Factories in the Pearl River Delta are facing a slump. 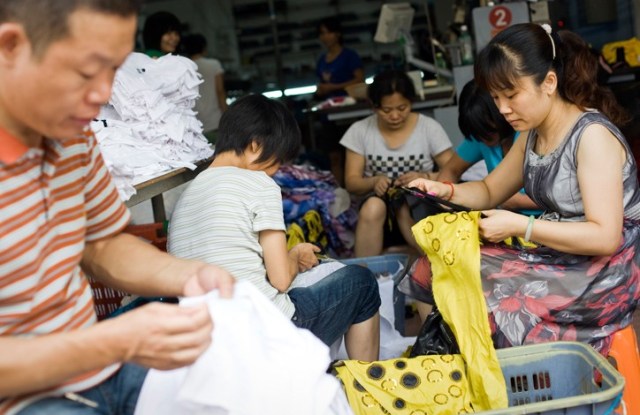 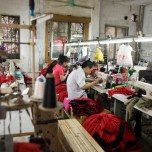 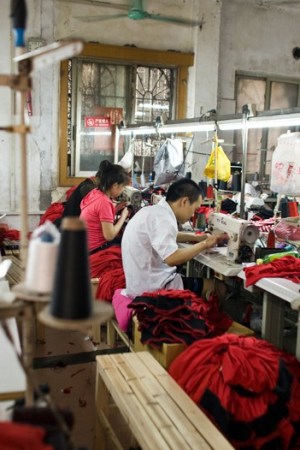 These days, factory managers and textile workers are puzzling over what to do next, as production moves further inland and out of China, prices rise ever quickly and demand continues to sag. Orders are slow, prices high and factories are in a slump.

It’s a puzzle that affects not only China’s core manufacturing zone, but also far-flung locations around the globe. One visit to the massive denim wholesale market in Xintang, China’s top denim-producing city, shows just how dependent the world has become on cheap Chinese clothing and textile construction.

Joe Masajjage, for instance, built his Uganda business model on reliably fashion-forward denim bought for a reasonable price in China. He sells it for a 15-120 percent markup back home, leaving just a small margin and little room for inflation.

Every month, Masajjage, who sources for clothing markets in the capital of Uganda, travels to Guangzhou, seeking out new denim trends and ordering several thousand pieces per visit. This summer, things aren’t going as planned; he’s had to extend his excursion and dig deeper into China’s denim production zone.

“I can get things, but I have to look a lot hard and spend a lot more time,” he explains. “The prices are much higher and there’s no innovation; it’s the same old, same old.”

While he used to be able to buy decent styles and new denim trends for 30 yuan, or $4.65, per pair of jeans, Masajjage is finding prices up by as much as 50 percent on this trip. Vendors are asking up to 45 yuan, or $7, per item for what he considers inferior products.

Masagjjage is by no means alone. His experience is the new norm for clothing buyers in China, and in particular the Pearl River Delta, where higher costs for labor and raw materials are pushing prices up fast. In addition to increasing costs on the back end, continued softer demand from the United States and Europe means factories have scaled back their production lines and have less to offer. In other words, the heartland of China’s textile and clothing manufacturing industry is in a major slump.

“It’s really bad right now,” said Zhan Tailin, who operates a trading company that represents factories in Xintang, which makes more than half the world’s denim. “We’re not even exactly sure why. It’s not just jeans, but there are problems within the whole clothing industry.”

Factories both large and small concur: these are bad times for the clothing industry in and around Guangzhou, which never quite seemed to recover from the global economic downturn of 2008. Factory owners and workers here say the boom times — 2005-06 — seem far away and not likely to return.

“This year is especially bad. There are no orders and we’re not really sure what the problem is,” said Guo Haiying, a worker in a one of the many hundreds of small textile and apparel factories stacked in high-rises in Guangzhou’s Haizhu district.

In years past, the district hummed 24 hours a day with sewing, cutting and finishing garments bound for export. This summer, workers say, companies often sit days on end without orders and have reduced their staffing levels to the bare minimum.

Since the economic crisis, demand from the US and Europe has not come back to its previous levels. At the same time, Guangzhou has increased the local minimum wage and the price of cotton and other raw materials are reaching all-time highs. None of this is great news for China’s basic clothing and textile manufacturing, where factories remain under pressure to keep their prices low or lose business to Vietnam and other competing countries and regions.

Neither the government nor industry groups have released statistics about the number of clothing and apparel factories that have closed down or moved. But a journey through Guangzhou’s production zone shows clearly that the industry is changing, and moving away.

Inflation has created problems for the workforce, typically made up of migrant workers from far-flung provinces, who used to work for little money and expect even less by way of rights and fairness. Those days are long gone, however, as migrants’ expectations continue to rise.

He added: “Workers nowadays are quite emotional, however we have to respect them because sometimes recruiters are even more expensive than workers who are looking for jobs.”

Those emotions have boiled over in a series of strikes and riots in the region this summer. Paramilitary troops are still present on the streets of Dadun village in Xintang, where thousands of workers rioted for three days to protest mistreatment of a pregnant migrant woman there. Just last week, 4,000 workers staged a three-day strike at a Korean-owned factory that makes handbags for global luxury brands. It’s unclear what will happen next, but China’s low-wage, cheap manufacturing model appears on its way out.

Zeng Feiyang, who runs a non-governmental organization in Guangzhou for migrant workers, said the migrants become more aware of their rights every year, and the government needs to act to stave of further labor disputes.

“Workers are no longer willing to accept the same conditions as they have in the past,” said Zeng.

Yet as difficult as these growing pains may seem, they are somewhat seamlessly in line with the Chinese government’s larger plans: to move away from basic manufacturing and instead create and produce value-added products. The Chinese government has an ambitious plan to become an economy based on innovation rather than base manufacturing by 2020. The biggest change and perhaps hardest transition begins here in Guangzhou.