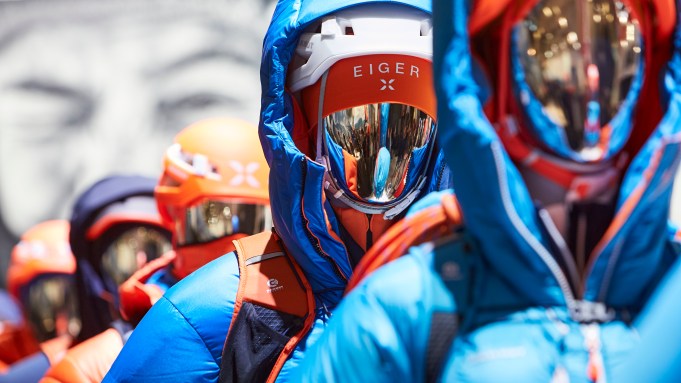 MUNICH — Climate change was on almost everyone’s mind at the ISPO trade fair here, as the sporting goods industry is being forced to adapt just like every industry.

“Everybody is struggling with it,” said Claudia Klingelhöfer, head of marketing for Messe Munich, the trade fair company that runs ISPO. As a result, the sports industry is changing at a fundamental level, putting increased focus on non-seasonal products and becoming more environmentally friendly. These developments are also impacting ISPO, Klingelhöfer confirmed.

“We are trying to evolve ISPO from a trade show for winter sports into a broader platform, to move it from purely functional to aspirational,” she noted.

That means expanding the event’s audience. Since last year, ISPO has been running a summer edition, called Outdoor by ISPO, which reflects the trends in the sector and also attempts to bring other stakeholders to the table. “Clubs, foundations, think tanks, even mobility stakeholders and people who think about city infrastructure,” Klingelhöfer noted. For example, this was the first year brands like Toyota and Sony came to ISPO, she said.

Around 80,000 visitors made their way to ISPO. Although the numbers reflected a slight decrease from last year, the feedback was excellent, ISPO chief Jeanette Loos said.

“We know it’s tough for retailers in their home markets,” Loos told WWD. “So we have to have a platform where they can find what they are looking for, whether that is experts or influencers or star athletes. We have to be broader,” she concluded. “And we’re working on it.”

Here, the biggest trends from this year’s ISPO, that are impacting the sportswear market today.

Whether you want to call it urban outdoor, ath-leisure or sports lifestyle, one thing is clear: The intersection where highly technical sports clothing meets the city street is one of the most promising areas of the business. While retailers have reported losses or stagnation in seasonal items — branches like snow sports or soccer — they have seen ongoing and increased growth in weather-independent and non-seasonal products, such as exercise and fitness gear and those with potential for urban crossover, like winter jackets.

“Outdoor today is aspirational,” explained Yoann Patural, who is responsible for merchandise and apparel in Europe, the Middle East and Africa for U.S.-based brand Columbia. “It’s like surfing was in the Nineties,” he said, “when people wanted to wear flip-flops all day and live in a van, even though they weren’t surfers. It’s about that kind of idea of freedom.

“We believe in a growing category called ‘modern hiking’,” Patural continued, picking up a pair of Columbia’s new hybrid hiking boot-cum-sneaker, the Facet. “We see more and more influences from the street and outdoor coming together.”

Columbia isn’t the only one producing this kind of footwear; other shoes, such as Adidas’ Free Hiker, are also aimed at the city slicker who wants something they could ostensibly also wear in the wild.

Zalando sportswear buyers Hanna Janzen and Axel Stuedemann said this year’s fair confirmed an evolution they have been seeing since early 2019. “Rapid shifts in our society have transformed the traditional mountain outdoor look into a younger, more urban-orientated one,” the buyers said. “In particular, brands like The North Face, Columbia or Patagonia are driving this trend with their focus on style, functionality and sustainability.”

In fact, at a press conference to reveal its financial results, the head of major Switzerland-based sports retail chain Intersport, Mathias Boenke, even described the idea of “outdoor” as “the new yoga.”

Signage at various major stands indicated how popular these outdoor aspirations were. Adidas boasted that it was “time to change lives” because we spend too much time indoors; down-free brand Save the Duck proclaimed it was going “from Mt Everest to the city,” and another Italian skiwear company, Spyder, said it was moving “from the mountain to the metropolitan.”

“There’s definitely more interest in urbanwear, and having dressed ski teams for years, we can use the technology for more urban styles, too,” Mitsuru Yamada, creative director of Japanese ski brand Descente’s cult Allterrain line, added. Allterrain combines matte black knit, neoprene and high-tech and has also been exhibited at Pitti Uomo and in Paris.

This will likely be the year that ISPO becomes known as the place that plastic bottles go to die. Every third exhibitor boasted about how they were turning old PET bottles into ski jackets, or how PFC-free their waterproof gear was. The concept of sustainability was certainly not niche anymore.

“In fact, it was quite difficult to find a stand that didn’t advertise what they were doing in this area,” noted Prof. Harald Lange, a sports scientist from the University of Wuerzburg, who comes to ISPO every year to research the latest fitness equipment. “Last year the topic [sustainability] was noticeable. But this year it is unmissable.”

“We have been more modest about this in the past but that is changing,” agreed Sato Louisa Feller, public relations manager for German brand Jack Wolfskin; the company has been working on recyclables and fair trade for a long time but this year, the message was the most important at its stand. “Of course, there are different levels of focus,” she said. “It really depends on the retailer but it is growing in importance for them too.”

Deloitte’s 2019 European Health & Fitness Market Report found that over half of consumers would pay between eight and 20 euros extra for a product that was of good quality and sustainable.

“You do still have to watch out for green-washing,” agreed Anna Beltzung, a scientist and cofounder of Dimpora, a new generation of fluorine-free functional membrane. She estimates around a third of the businesses involved are genuine in their efforts toward sustainability, with the other two-thirds just beginning to dabble.

“The big retail players are under pressure to include more sustainability in their portfolios and that has been a huge door opener for a company like ours,” added Maike Blankenstein, marketing manager for Kavat footwear, which has four stores in Sweden and whose business is based on leather goods produced in an environmentally conscious way. “Before we had more interest from smaller, specialist boutiques.”

Meanwhile Adidas is trying to bring all of those important trends — urban outdoor and sustainability — together in one jacket, its prize-winning FutureCraft.Loop Anorak, part of the company’s Terrex line. “Terrex had previously been positioned as a high-tech alpine brand,” explained Sebastian Scholtysik, a public relations manager for Adidas Outdoor, as he showed off the anorak, which has no velcro, zips or buttons and remains undyed, so that it can be easily recycled at the end of its life. Adidas didn’t attend ISPO for over a decade but returned to show off its new take on Terrex. “We want to open it [Terrex] up to everybody,” Scholtysik said. “We want to have products that are high performing, but that also have great style. And sustainability is particularly important to our younger customers.”

Health and wellness is a huge growth market for apparel, said Michael Larsen, export manager for Sports Group Denmark, which sells about 15 clothing brands. A lot of that has to do with climate change, he explained. “It’s a tough market and getting tougher,” Larsen noted. “The winters are warmer so retailers need something they can sell all year round, instead of waiting for it to get cold. That’s why we are having so much success with products like this,” he pointed to racks of the company’s Athlecia range. “It is yoga-based but with seamless tights and multifunctional base layers, so you can use it every day.”

The move toward digital health and the gamification of fitness continues, with gym gear and clothing able to measure everything from your heartbeat to your running style (via smart insoles from France’s Digitsole, for example) as you train, as well as alert the authorities if you have an accident. Fit-tech aggregators — platforms that can do all of the above, and count your calories, too — are also increasingly popular.

For example, a new product called Straffr was not only a Pilates-style resistance band and exercise accessory, it was also digital, providing feedback as you worked out, to show you whether you’re using it correctly. Exercise machine maker Bowflex offered real-time activity tracking and tutorials as well as a selection of Netflix shows to watch while working out. Sensors of all kinds were being built into garments, gear and helmets.

“And there is also a certain segment of buyers, who are willing to pay more for the best, smartest equipment,” said Lange, the professor from Wuerzburg University, pointing to a set of new punching bags from Germany-based fitness studio Khou Khii as an example. These use a special, softer-on-your-fists cork cover and wouldn’t look out of place hanging up in a designer studio. That aligns with findings from consultancy Deloitte’s 2019 market report, which found the most growth in the sector was coming from either low-cost fitness centers, or premium boutique gyms.